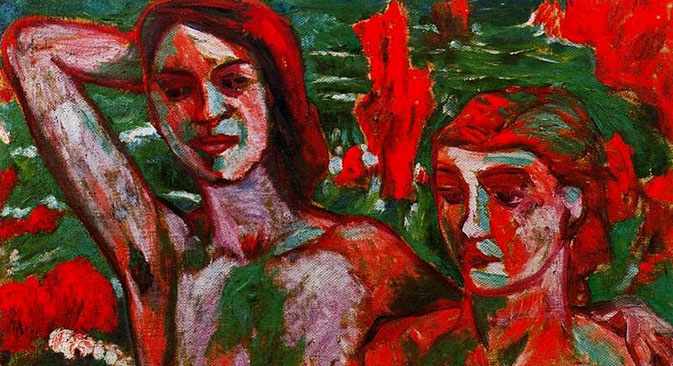 An influential group of Russian artists, little known to Western audiences, is recognised in a new exhibition in London, writes Aliya Sayakhova.

When the Jack of Diamonds exhibition opened in Moscow on December 10, 1918, the public was so confused by the title that many thought it was either a gambling house or a brothel. When finally seen by bewildered crowds, the show was considered “a slap in the face of public taste” [A title of the Futurist manifesto published in 1912]: the unconventional character of many of the artworks on display prompted critics to dismiss the show as youthful “hooliganism”.

Today, paintings exhibited at the Jack of Diamonds group shows from 1910-1917 hardly provoke the same shock as they did in the early 20th century. Yet, looking back at the exhibition catalogues, we can appreciate the radicalism of these works, which laid the foundations for the Russian Avant-garde of 1910-1930 – universally recognised as the most innovative period in the history of Russian Art.

On September 18, the Courtauld Gallery in London opens a Jack of Diamonds display that pays tribute to those artists and artworks that sought to overthrow the centuries-old conventions and norms of accepted artistic representation. The exhibition showcases 11 works by artists such as Mikhail Larionov, Natalia Goncharova, Aristarkh Lentulov, Olga Rozanova, and Alexandra Exter, all of whom were members of the Bubnovy Valet group. The project is led by the Cambridge Courtauld Russian Art Centre and presents works from the private collection of Alex Lachman, a prominent dealer and collector of Russian Art.

Dr Natalia Murray, who curated the show alongside Professor John Milner, explained that there had long been an idea to stage an exhibition on the subject. But, since the Jack of Diamonds movement is not well known in the West, they felt it would be useful to organise a smaller exhibition first, so as to introduce the term and the artists associated with it to the British public.

Jack of Diamonds was the first exhibition society to bring together the founders of the Russian Avant-Garde and the latest European art. In December 1910, at the first Jack of Diamonds exhibition, portraits and still lives by young Russian artists were exhibited alongside works of the French Cubists Albert Gleizes and Henri Le Fauconnier as well as paintings by Wassily Kandinsky, Marianna Werefkin and Alexei von Jawlensky.

The scheduling of the current exhibition, which runs until January 18, could not be more appropriate, with the UK-Russia Year of Culture in full swing. Murray says: “This exhibition will enhance a much-needed dialogue. As the Jack of Diamonds embraced cultural dialogue, it is especially appropriate to recognise this now.”

Equally appropriate is the venue: the Courtauld Gallery holds works by many of the French and German artists whose art had such a profound impact on the members of the Jack of Diamonds group – Matisse, the Fauves, German Expressionists, etc. The Gallery’s permanent display thus provides a perfect backdrop for the exhibition and will “encourage the cross-cultural dialogue which the Jack of Diamonds artists were striving to achieve in 1910”.

“It is the combination of Russian national traditions and Western-European innovation that made this group unique”, explains Murray.  Many of the Jack of Diamonds artists were united by their interest in folk art, shop signs, and Russian popular prints, known as lubki. European art had a great impact, but also provoked a vigorous reaction. To accommodate these powerful debates the Jack of Diamonds Association held a series of lively debates, or Disputes. The Disputes revealed some significant discrepancies among the positions of the founding members: At a meeting at the Polytechnic Museum on February 12, 1912, where the paths of new art in Russia were discussed, Goncharova publically denounced the Jack of Diamonds exhibition and announced the formation of the Donkey’s Tail group.

A century later, the Courtauld is holding its own Disputes to coincide with the display and recreate their innovative arguments in a series of panel discussions taking place on October 24 and November 7.

I ask Murray what was the ultimate impact of a movement that seemed to unite such diverse artists working across all the –isms (neo-primitivism, rayonnism, constructivism, futurism, etc) into one group. She cites critic Yakov Tugendkhold who declared that the Jack of Diamonds carried out a special and major mission in art, bringing Russian painting closer to French artistic culture.

The opening of the Jack of Diamonds exhibition in December 1910 was one of the most important events in the history of Russian Art. According to Kazimir Malevich, it could only be compared with the eruption of the biggest volcano. “By allowing their brave creative experiments to break into the very essence of artistic life, Russian avant-garde artists changed not only the historic development of Russian art, but the face of European modernism of the early 20th century,” affirms Murray.