The Forbidden Fruit: Baked Apples with a Twist 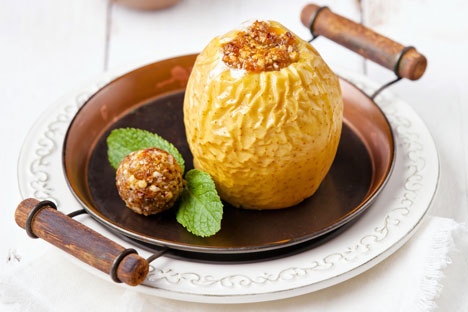 Apple-lovers in Russia may be up in arms over the lack of choice of varieties of the fruit in shops due to bans on European imports, but since late August is traditionally seen as apple season in Russia, now is the time to get into the kitchen and prepare some old favorites – and some new versions of classic recipes.

Although apple season has just started, the world’s most iconic fruit has been making headlines all summer. In July, Russian lawmakers placed a ban on apple imports from Poland, which was widely interpreted as a traditional wrist-slap for Poland’s cozying up to NATO over Russia’s actions in eastern Ukraine.

The ban represents a major setback for Polish apple growers, who export almost a third of their annual crop (worth €300 million) to Russia. In early August, apple fans suffered another blow as the Kremlin banned all produce from countries that had imposed economic sanctions upon Russia.

The timing could not be worse in view of the fact that Russia’s most apple-centric holiday — Yablochny Spas (Apple Savior) — takes place on August 19. Fused with the Christian celebration of the Transfiguration of Jesus, this lively and colorful harvest festival has roots that predate Christianity, centered on giving thanks for the bounty of the late summer harvest.

In the Christian tradition, Transfiguration celebrates the pivotal moment when Jesus reveals himself as the son of God to the apostles Peter, James and John on the summit of Mount Tabor in the presence of the prophets Moses and Elijiah.

The Gospel of Matthew reports: “And lo a voice from heaven, saying, This is my beloved Son, in whom I am well pleased.”  This is an important hinge in the cycle of the life of Christ: a moment of transition and change, as well as glorification and fulfillment. What better time of the year to celebrate it than at the transitional moment between seasons that is harvest time? It is easy to see how the two holidays became fused into one festival.

Yablochniy Spas is preceded by ‘Wet’ or ‘Honey’ Spas, the zenith of the beekeeping calendar. It is followed by ‘Nut’ Spas, which marks the appropriate time in European Russia to harvest local nuts. On these occasions, the harvested food is brought to church to be blessed, special recipes are dusted off and a fair-like atmosphere pervades. This is the time of year for pressing both apples and honey into popular Russian distilled beverages such as medovukha and kvass.

In honor of Yablochny Spas, as well as Honey Spas and Nut Spas, I thought it appropriate to tweak an old favorite and combine these three flavors in one. Nothing says “it’s fall” quite like the smell of baked apples wafting from the oven. This simple but hugely satisfying dish is the ultimate comfort food, but I find that apples need to be livened up with more intense flavors. I played around with some of apples’ natural allies and came up with a winning combination of pungent, tart, and sweet.

Now if I can only find some apples…

1. Preheat the oven to 350℉ (180℃). Adjust the rack to the middle of the oven. Line a shallow baking dish with parchment paper.

2. Process the dry ingredients, alcohol, and the butter together in a food processor, fitted with a steel blade. Pulse 5 times to combine. Set aside.

3. Use a small and very sharp knife to carefully core the apple, creating a conical cavity that is wider at the top than it is down in the base.  Take care to remove all of the apple seeds, but keep the bottom of the apple intact.

4. Brush lemon juice over the exposed skin of the apple to prevent it from going brown.

5. Fill the cavity of each apple with a heaping portion of the filling.

7. Cook for 35-45 minutes, uncovered, but baste the surface of the apples with the accumulated liquid 3 or 4 times during this time. This will create a lovely caramelized coating to the apples. To check if the apples are done, insert the tip of a sharp knife into the surface. It should go in easily and smoothly. Note that cooking times can vary significantly due to both the size and the type of apple you use.

8. Serve warm and spoon any of the remaining juices on top. This dish pairs beautifully with both whipped cream and vanilla ice cream.

Jennifer Eremeeva is an American writer who has called Moscow home for twenty years. She is the author of Lenin Lives Next Door: Marriage, Martinis, and Mayhem in Moscow [ amzn.to/TP1EFD ] and Have Personality Disorder, Will Rule Russia:  A Concise History of Russia  [amzn.to/1kh1LJg ]. She writes about Russian history, culture, everyday life and humor, and food at http://jennifereremeeva.com