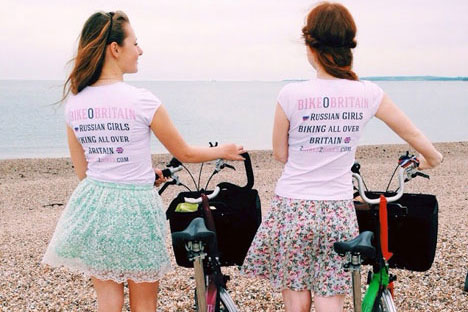 A journey round four countries on two wheels. 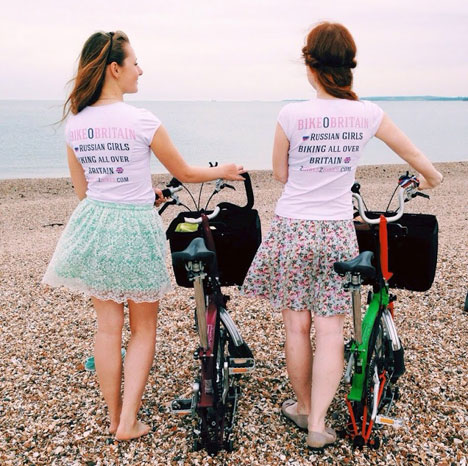 Late evening in Eastbourne and two girls are sitting on the beach in the gathering darkness, their bicycles resting on the sand nearby. Tasha Konkina and Yulia Elyakova don’t know anyone here and don’t have a tent or sleeping bags, or money for a hotel.

But they are sure that the evening will end well. The two Russians cycled around the UK this way, driven by a love of Britain and bicycles. They described their grand tour to RBTH.

We are huge fans of “veliks”, “VelikoBritania” and travelling, so we decided to combine the fun and make a bicycle trip all over the United Kingdom. This was our contribution to making cycling in Russia popular, by showing that you don’t have to be a sportsman to travel by bike in other countries or around your city.

We started in London, where we spent the first week sightseeing, shopping, and exploring the night life. Cycling in London may seem crazy to many locals, but for us it was just perfect. We are both from St. Petersburg, which is gorgeous but has only 5 cycle lanes for the whole city of 5 million people.

We risk our lives when we cycle at home, but still do it every day. So riding a bike in London, among the famous red double-deckers and black cabs was pure pleasure.

The real adventure started when we left the capital and headed towards Dover. We saw the beautiful white cliffs of the southern coast, rode along the sandy sea shore in Portsmouth, and ate strawberries for breakfast at the foot of Stonehenge.

We crossed the magnificent Severn Bridge on our way to Wales, studied Welsh words in Cardiff, swam in the sea in Swansea and ate the best fish’n’chips ever on the northern Welsh coast on our way to Chester. We swayed along to the sound of the Beatles in Liverpool and almost missed our ferry to Dublin. But we made it and learnt how to pour a perfect pint in the Guinness museum.

We climbed the Cliffs of Moher with our bicycles (crazy Russians) and hitch-hiked with them to Galway. We ate a traditional breakfast of Irish fishermen (seafood chowder and Guinness) at Malin Head, the most northerly point of Ireland.

We also rode our small Brompton folding bicycles around the famous TT-racing track on the Isle of Man, danced a ceilidh in Glasgow, camped in the Highlands and climbed to the top of Ben Nevis. Two Scottish guys, with whom we camped in the Highlands, were stunned by the fact that we found a mushroom in the woods, roasted it on the campfire and ate it. But that’s what we do in Russia all the time: go mushroom and berry picking.

We made our longest ride of 63 miles from Glasgow to Edinburgh, met the Mayor of Linlithgow on his bike, and spent two amazing days at the Fringe festival in Edinburgh before our flight home. In Russia it is almost impossible to meet a government official on the street - they always ride in black cars with lots of security.

The whole journey took us five and a half weeks. What impressed us most was the sheer variety of the scenery: big cities, small villages, cliffs, cold sea, warm sea, hills, fields, mountains and lakes. In Wales, in the beautiful mountains of Snowdonia we had our first, and luckily only, accident: Yulia fell off her bike going downhill on a wet road, suffering a couple of big scratches on her knee and lip and a chipped tooth.

A very nice doctor called Mathew took her in an ambulance car all the way to our hostel on the mountain. In Russia you would usually see at least three people in an ambulance: a driver, a doctor and his assistant, while Mathew was alone. The next day Yulia rode 50 miles, brave and cheerful.

On our first day out of London, somewhere around Folkestone,Tasha’s gears stopped working properly and riding her bike became extremely hard and slow. We got help from Kevin, a motorbike mechanic and a single father who has 24 children!

He took us to his house, treated us with tea and a bunch of breathtaking stories about his life (you can read about them in our blog), fixed Tasha’s bike in his garage and gave us a ride in his car to Eastbourne.

So there we were, two girls on a cold beach. How did we find shelter with only our phones, bikes and a couple of cookies? Actually, it took only 20 minutes.

In planning this journey we did not want to be just tourists, passing through the country. We wanted to dive into the culture of all the four countries of the UK, to meet people and learn how they think, how they live, what they love most about their area. So we decided to use couchsurfing.org - a hospitality site where people can invite you to their homes and become friends.

We wrote to several people on the site while sitting on the beach and half an hour later were sitting in the cosy living room of a sweet local couple - Alice and Ray. A Russian would never visit a friend empty-handed, so we bought a huge watermelon on the way. Russians love to eat watermelons together - it is fun to cut it, to laugh at each other’s smudgy faces and to spit out the seeds.

But our English friends were so surprised. They told us that the British don’t really eat watermelon unless it is cut in pieces and put on tiny sticks. See why couchsurfing is so useful? To our next hosts we tried to bring something more traditional: cheesecakes and fruits in England and Wales, beers in Ireland and Scotland.

Every host we had gave us a lot of useful information about life in their town and a tour around the area. In Glasgow our new friends Joanna and Conaill took us to a crazy “ceilidh” party and taught us how to dance this fun Scottish dance.

Russians are also very welcoming and once you are a guest in a Russian home you get the best of everything. But we didn’t expect to find this kind of warm attitude in a foreign country from people we have just met.

There were also very many people that we didn’t even meet, but who had seen our T-shirts with the name of our blog or heard about us from friends, and wrote wonderful letters with advice about places and sights. Even the Mayor of London Boris Johnson wrote us a letter of support

We saw so many beautiful places thanks to our bikes, which made our journey vivid, healthy and cheap. But only thanks to the amazing and open-hearted people we met along the way can we say that we got a truly British experience of life, travel and friendship.”