Making a statement on the road: The world of the Russian bumper sticker 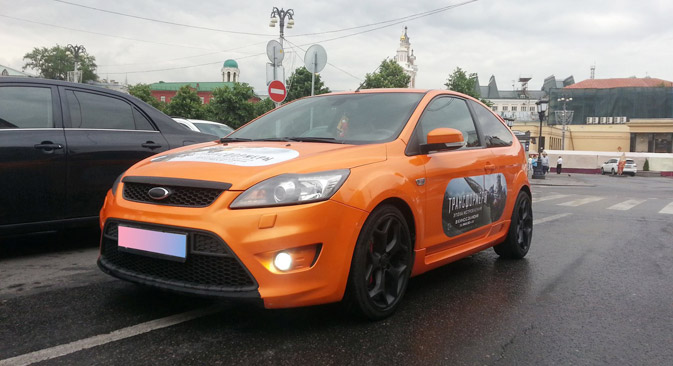 An increasing number of vehicles on Russian roads bear stickers on their bumpers or windows, through which people make jokes, express their political views or even make money. RBTH looks at the different reasons people in Russia decide to emblazon cars with stickers.

Sticker Ride is a young Moscow-based company that was set up a couple of years ago and offers car owners money for placing advertising stickers on their vehicles. Sticker Ride uses a mobile application that makes it possible to monitor where and how many kilometers a car carrying a sticker has covered. The car owner's "salary" is calculated depending on the length of the journey and on how many people there were in the streets that the car passed. According to the founder of the project, Mikhail Marchenko, there is no crazy money to be had there but there is quite enough to compensate for the cost of petrol. Which brand to advertise on one's car is the owner's choice. The stickers are supplied and attached by Sticker Ride staff.

Sticker Ride is not the only company working in this market: if you type "advertising on cars for money" in your search engine, you will see dozens of websites, offering hundreds of various deals.

Bringing humor to the roads

Not all Muscovites put stickers on their cars with the sole purpose of making some money. Many do it absolutely free of charge, choosing stickers based on their ideology, values or sense of humor (or what they take to be a sense of humor). Online stores offer cheap stickers of practically any size and content - enough to cover a whole car, should you want to. Usually, however, car owners limit themselves to a single sticker on the rear window. It could be something official, like the Russian letter У (for learner) inside a red triangle, or the picture of a baby, meaning there are children on board, or something more frivolous; a statement that the car owner wants to share with the rest of the world.

For instance, you can often see huge four-wheel drives with "Fuck fuel economy" (in English) written on them. Another popular sticker, just bordering on the acceptable in polite society, says, this time in Russian: "Yahoooею с этих дорог" (a play on words making fun of the fact that the name of the popular search engine sounds similar to a four-letter word in Russian, often used to express surprise, in this case at the quality of roads in Russia). Another sticker that some think funny while others find offensive depicts ‘knocked down babushkas’, in reference to the red stars that World War II pilots used to paint on their aircraft to mark the number of enemy planes they had hit.

One popular option is to have a Simon's Cat sticker somewhere near the petrol cap of your car. The cat is usually depicted hungry and with an empty bowl, hinting that the car is "hungry" too. A sticker like this can be useful in that it shows where the fuel cap is and often contains info on the type of gas the car takes. Thus, lazy car owners do not have to communicate with gas station assistants since all the relevant information is right there on the car, and in a light-hearted form too.

Relatively recently, stickers have begun to be used as an instrument in political agitation. About a year ago, when the top news story was the upcoming Moscow mayoral election, there were quite a few cars around sporting a Navalny sticker on their rear window. The stickers were one of the ways opposition candidate Alexei Navalny's supporters used to compensate for the lack of airtime he was getting on state TV channels, and his unorthodox strategies worked: Navalny got 27 percent of the vote and became a far more recognizable public figure to the general public.

Now that Navalny, who is currently under house arrest, receives virtually no media coverage at all, there are markedly fewer cars with his stickers around. Instead, online stores offer stickers depicting so-called "polite men" (i.e. the Russian soldiers who facilitated the bloodless takeover of Crimea), which in itself is an interesting reflection of the current political sentiment in the country.

Once every year, there is a noticeable increase in the number of cars with stickers on the streets of Moscow. This happens in early May, ahead of Victory Day, which is celebrated in Russia on May 9. Victory Day, when World War II veterans are remembered and celebrated, is perhaps the only truly patriotic holiday in Russia.

Ahead of the occasion, many motorists decorate their vehicles with stickers featuring red stars, the St. George ribbon (a symbol of military valor) or stickers that say: "Thank you for the victory, Granddad!" or "I remember and I am proud" and others. Some choose stickers that say: "To Berlin!" in reference to Soviet tanks and aircraft that had similar inscriptions scrawled upon them as they advanced west.

Usually, after the Victory Day celebrations are over, most of these stickers are removed, though not always. About a year ago, there was a TV report about a Muscovite who covered his car with Victory Day symbols and kept them on for the whole year. "I have not been stopped by the traffic police once since I put all those stickers on; they just smile and wave me by," he told the TV reporter, very pleased with himself.

Sometimes stickers appear on a car against the owner's will. The grass-roots public organization Stopkham (‘Stop the lout’ in Russian) campaigns against drivers who break parking rules by putting huge stickers on their windscreens that say: "I don’t give a damn about anyone, I park where I want." Often the car owners targeted by the campaigners catch them in the act of putting the stickers on their vehicles, and try to stop or even assault them. The activists film these incidents and post them online. Sickers can therefore sometimes become a badge of shame. However, Stopkham activists themselves acknowledge that their stickers are very easy to remove, so offending car owners do not have to suffer long.