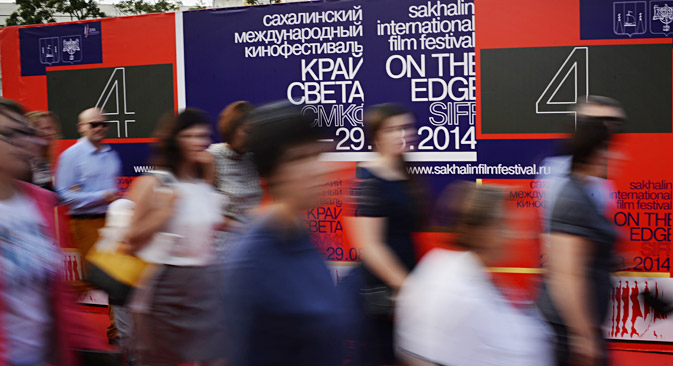 11 films from 10 countries were entered into the contest program of the festival. Source: Itar-Tass

The 2013 Indian film Ship of Theseus won the main prize at the 4th Sakhalin International Film Festival, Interfax reported on Monday. The film directed and written by Anand Gandhi was awarded the Grand Prix and 1 million roubles ($27,000).

The film shot in Mumbai and Stockholm explores “questions of identity, justice, beauty, meaning and death through the stories of an experimental photographer, an ailing monk and an enterprising stockbroker.” It also won the best feature film award at India’s National Film Awards.

The closing ceremony of the seven-day festival was held on August 29 and the chairman of the jury, film director and People’s Artist Vadim Abdrashitov, announced the winners, according to the Interfax report.

“Several days had passed after the viewing of this picture but the jury still had a strong impression from it,” Abdrashitov was quoted by the news agency as saying at the closing ceremony.

He added that many good films were represented in the competition, but “several of them we could not mention because there were not enough nominations.”

The traditional prize of the On the Edge Film Festival, the Award of the Honorary President Alla Surikova, went to the Sakhalin native Oksana Bychkova for the film Another Year. The Special Jury Prize was awarded to the director of the film Corrections Class, Ivan Tverdovsky and the Audience Choice Grand Prix went to the Russian film Star.

The organizers said the second edition of the festival was successful and there was a large turnout in the city of Yuzhno-Sakhalinsk. Almost all films (and more than 100 were shown that week) were sold out. Despite the cool evenings, at 10 pm, every day the seats in the open air theatre near the Regional Government House were occupied: Sakhalin residents brought blankets, sleeping bags (settling down on them on the lawns), and thermoses of hot tea.

Locals and visitors eagerly attended master classes and meetings with directors after the film showings. In the opinion of the Sakhalin residents themselves, the film festival was once again the main cultural event of the year in the region.

11 films from 10 countries were entered into the contest program of the festival, according to the report.

The city of Yuzhno-Sakhalinsk has 2 Indian restaurants and a small Indian community, with professionals mainly working in the oil and gas industry. Indian charities and religious organisations like ISKCON and Missionaries of Charity also have centres on Sakhalin Island.

India’s ONGC was among the first foreign companies to invest in a production sharing agreement with the Russian Government, resulting in a 20 percent stake in the Sakhalin-1 project.

Materials from an Interfax report were used in this article.