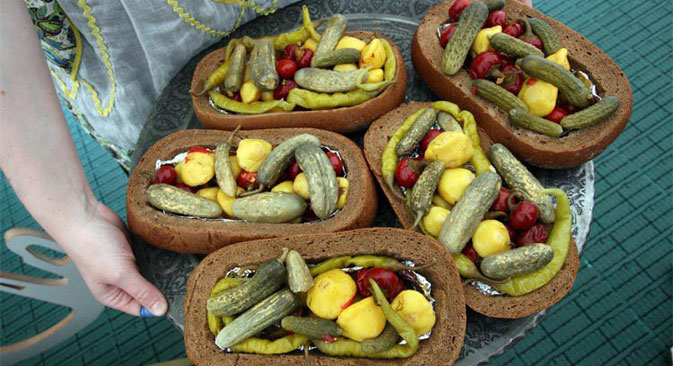 The Russian Revels adventure was first envisaged when Katrina Kollegaeva was running her own ‘tiny supper club at home’ three years ago. Kollegaeva, a freelance food writer and a full time food appreciator with Estonian roots, realised that the English knew very little about the Slavic food she was preparing for the supper club. She wanted ‘to question that fact’, to explore modern developments in Slavic food culture and to challenge what Slavic food means in the 21st century. She feels that few people know much about Slavic food and that their meagre knowledge is mostly based on rough vodka and borscht stereotypes.

The aim of Russian Revels was to expand the audiences, to tell a human story of a very exciting culture and history of food in various Slavic regions.

Russian Revels is the brainchild of Kollegaeva and Karina Baldry. The company specialises in pop-up events based on food, stories and a bit of theatricality. The name of the company is meant to convey the excitement of a party. The aim of the company is to challenge Russian stereotypes and to teach the audience about the intricate details of Slavic food traditions, highlighting the ‘breadth and differences of the regions’.

Their upcoming event is called Dacha, which means ‘country house’ in Russian – a symbol of Russian comfort, associated with ‘jam-making and allotments’.  The idea of going to the Dacha on a summer holiday suggests the Slavic values of ‘freedom, liberty and being in touch with the land’.

The event takes place on London’s South Bank riverside from September 26-28, during the harvest time. It features colourful food tastings and talks about the food presented at three or four stalls. Offerings include cultured milks (kefir), Georgian and Ukrainian wine, traditional bread and other small starters (zakuski or Slavic tapas) such as borscht in a pie (Karina’s invention – beetroot in a crumbly pastry) and oladushki (Russian pancakes). The inspiration behind the event comes from the organisers wanting to ‘introduce London to famous produces’ of British companies with roots in Russia or former Soviet Union regions, showcasing Slavic cuisine in London.

VIDEO: The dacha of Ziferblat

In late July, Russian Revels held an evening with Amy von Bremzen, author of the inspiring memoir ‘Mastering the Art of Soviet Cooking’.  It took place in an ‘old building in Notting Hill’, which helped to channel the intimate ‘romantic atmosphere’ of the  ‘1960s intelligentsia’ during long evenings spent with neighbours in Moscow’s kommunalki (apartments shared between a few families, where one family would sleep in one or two rooms). The writer discussed her published and unpublished work, while the Russian Revels ladies provided food such as beetroot soup, a Soviet version of pulled pork and fried potatoes, and other delicacies.

A completely different event was held in conjunction with Pushkin House in London’s Bloomsbury, which hosts a multitude of Russian events. This was ‘a journey through the original Nutcracker fairytale’, according to Baldry, which is full of dark metaphors, unlike the light and happy ballet that everyone associates with Nutcracker. It took three months to create one night of magic, an immersion theatre and food experience, where the audience was invited to walk through the decorated house to meet the characters of the Nutcracker and taste Russian inspired winter food.

The Russian Revels have many varied plans for the future, including possibly opening their own place to introduce clients to the world of Slavic cuisine. Whilst the founders have become experts at setting up a pop-up dinner (you need good quality food, an exciting location and a story to tell), running a café or a restaurant would be a new challenge. The pop-up format works for Russian Revels for tactical reasons, as you need only a few enthusiastic people and a great idea to work from.

Register at russianrevels.co.uk to get a free glass of wine or vodka.