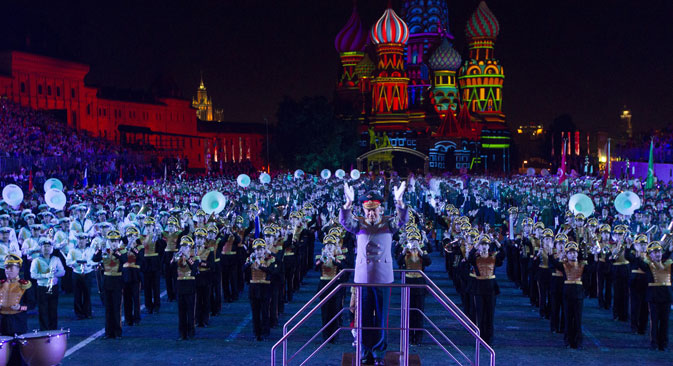 The festival culminated in a joint performance by all its participants. Source: Sergei Mikheev / RG

From August 30 to September 7, Moscow's Red Square hosted the Spasskaya Tower military music festival. The event welcomed 27 military bands from nine countries and featured performances by musicians from countries as diverse as China, Mexico, Switzerland and Turkey. RBTH’s Dimitry Romendik reports on an event that was spectacular, colorful, and at times emotional.

This year’s event was devoted to the 100th anniversary of the start of the First World War, characterized by the predominance of historical re-enactment, with many of the festival’s participants performing in early 20th century military uniforms.

"For me, performing in the country's main square is an adrenalin rush,” Yevgeny Filatov, a clarinet player with the Central Naval Orchestra, told RBTH. “This isn’t my first performance in Red Square, but each time I feel a particular joy." The Russian Navy orchestra, headed by Captain 1st Rank Alexei Karabanov, makes regular appearances at the Spasskaya Tower festival.

One of the country's best military bands, the ensemble regular tours the country’s most prestigious venues. The musicians performed a fragment from Sheherazade, a symphonic poem by 19th century Russian composer Nikolai Rimsky-Korsakov, whose name the orchestra bears.

As for Ireland's Le Cheile Sa Cheol (which translates from Gaelic as ‘together in music’) massed pipes and drums band, this is their first visit to Moscow. From the airport, the musicians went straight into rehearsal and were amazed by the beauty of St. Basil's Cathedral. The bandleader, Jim O’Hagan, was very nervous before walking into Red Square.

Orchestras from around the world perform on Red Square

"I served in the Irish army for 23 years. I retired several years ago and decided to form an orchestra, inviting musicians from both the Republic of Ireland and Northern Ireland," he told RBTH. There are 53 musicians in his orchestra now - from both countries. They were one of the first to walk into Red Square, and performed "Katyusha", one of the best-known Russian songs of World War II.

Meanwhile, the Banda Monumental de México was performing at Spasskaya Bashnya for the second time, and together with the Tenochtitlan folk dance company the musicians staged an impressive music and dance show, dressed in the national costumes of caballeros.

"To return to Moscow is an amazing thing, it is like a dream. We have taken part in many events in different countries but Spasskaya Tower is unique, a truly military festival," said Leo Sorcia, musical director of Banda Monumental de México. To the accompaniment of catchy Latin American melodies performed by the brass band, the Tenochtitlan company traced the whole history of dance in Mexico, from Indians to the first conquistadors to the present day.

One of the most striking performances at the festival was that of China's Shaolin monks, who presented a Wudang Wushu program, in a style that brought to mind the best Bruce Lee and Jackie Chan films. The She Huo cultural troupe from Shaanxi were performing at Spasskaya Tower for the fifth time, and as usual they were greeted with rapturous applause.

The group demonstrated Wudang Kung Fu from the province of Hubei. "Wudang Wushu is different from Shaolin Kung Fu in that it is directed to the outside, from within oneself. All the movements are smooth and calm," a member of the Chinese delegation told the Mir-24 TV channel.

Historical re-enactment at this year's festival went far beyond the First World War. This was the third Spasskaya Tower festival for the Vieux-Grenadiers Company from Switzerland, who were dressed in 19th century uniforms and were armed with real muskets, swords and sabers of the time. Another re-enactment orchestra was Turkey's Mehter from Iznik, the world's oldest military band, founded back in the 13th century.

Throughout the history of the Ottoman Empire, Mehter played janissary music and was disbanded when the Janissary Corps was disbanded in the early 19th century. Modern-day musicians have recreated the ancient janissary setup: they play Ottoman military marches and re-enact saber fights.

In another part of Red Square, beyond the Lenin mausoleum, an equestrian show was held. A special riding arena was built there for riding performances and master classes. The main part of the program featured the Cavalry Escort of the Presidential Regiment and the Kremlin Horse Riding School, as well as a demonstration of Russian thoroughbreds and a show of traditional trick riding from the Caucasus, known as dzhigitovka.

Perhaps the most fascinating part of that program was the “Emotion” show by the renowned French acrobat and horseman Lorenzo, who left the audience on the verge of a nervous breakdown as he literally flew above his horses. It also turned out to be the most expensive part of the show, as Lorenzo had brought 12 horses with him and all of them were involved in his number.

The festival culminated in a joint performance by all its participants. It was hard to say how many of them were in Red Square: Officially, there were 27 bands taking part but the actual number of musicians was impossible to count as the whole square turned into a sea of people.

This gigantic orchestra was conducted by the musical director of the festival, Russia's chief military conductor, Lt-Gen Valery Khalilov. The show ended with a spectacular fireworks display above St Basil's Cathedral.