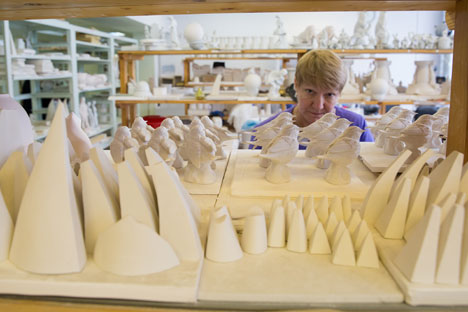 The Imperial Porcelain Factory, Russia’s oldest producer of fine china, turns 270 years on Sept.18. The creations of its masters are exhibited in the world’s best museums, sold at high-profile auctions, and set on the tables of international summits. RBTH finds out how the company began and how it acquired the secret of porcelain production from China.

This month marks the 270th anniversary of one of Russia’s most cherished institutions, the Imperial Porcelain Factory in St. Petersburg. Yet although the name of the factory has become synonymous in Russia with fine china and tableware, the story of the company’s origins and how it acquired the secret of porcelain production from the Chinese are not so well known.

The Imperial Porcelain Factory was founded in 1744 at the order of Empress Elizaveta Petrovna, the daughter of Peter I. Elizaveta invited Saxon specialist Christopher Hunger to start the factory. His assistant was Dmitry Vinogradov, one of the first Russian chemists and associate of renowned Russian scientist Mikhail Lomonosov.

Hunger turned out to be a charlatan – not only did he not invent Russian porcelain, but he even failed to replicate German fine china. He only managed to manufacture six cups, and low quality ones at that. Hunger was driven out in the fall of 1746, and Vinogradov took his place.

From formula to production

Vinogradov deduced the treasured porcelain formula soon after, in January 1747. How did he uncover the secret so thoroughly protected in Europe and China in just a few months?

The Imperial Porcelain Factory’s wares can be found not only in Russia and the former Soviet republics, but also in several European and American cities. The factory has stores in Tallinn, Paris, Vancouver, and New York, and it will soon be opening a store in Vienna.

The St. Petersburg factory is also represented in major European department stories, including Paris’ Galeries Lafayette and the Printemps store.

According to modern historian Konstantin Pisarenko, the secret was spirited from China by ensign Alexei Vladykin, who spoke Chinese perfectly, was involved in trade (and, of course, intelligence), and spent time in the company of Chinese ministers.

Vladykin learned the secret behind porcelain production from a Chinese document back in 1741, but he was only able to bring it to Russia in 1746.

Vinogradov’s factory started manufacturing fine china according to the recipe provided by Vladykin, and the teacups turned out to be on a par with their Chinese counterparts.

Although Vinogradov was glorified as the inventor, he did not forget Vladykin, whom he promoted and placed at the head of the next trade caravan to China.

Porcelain cemetery and the subway

In the nearly 300 years of its existence, the factory has expanded to five-and-a-half hectares and influenced the local toponymy: It is neighbored by the Farforovskaya Railway Station (farfor is the Russian word for porcelain), the Farforovskoye Cemetery, and the Farforovsky Overpass. The St. Petersburg subway station closest to the factory was also named in its honor: Lomonosovskaya (the factory was called Lomonosov during Soviet times).

According to Tatyana Tylevich, general director of the Imperial Porcelain Factory, the enterprise currently employs around 1,200 people. There are three workshops: one for soft-paste porcelain (animalistic sculpture), one for hard-paste porcelain, and one for bone china (items made of bone china are so thin that they literally shine in the light).

Gzhel: Joining communities with a handful of clay for centuries

The factory’s main European competitors are British producer Wedgwood and German manufacturer Meissen. However, these companies transferred production to South-East Asia long ago, leaving just the brand and design in Europe.

“The Imperial Factory is one of the few in Europe that has not moved its production facilities to other regions,” Tylevich said. “Our products can’t be torn away from the place where they have been manufactured for 270 years,” she added.

But while the factory’s management, equipment, and manpower are Russian, its raw materials are imported from abroad – from Ukraine, to be exact. When the Ukrainian crisis began, the factory was forced to procure a year ahead. “We’re looking forward to a rapid conclusion to this conflict. We had several stores in Ukraine,” Tylevich said. “Now they’ve suspended their operations, but their owners are focused on future cooperation,” she added.

A jack of all trades

Even though she has been working with porcelain for as long as she can remember and has been with the factory for 40 years, Nelya Petrova, the Imperial Factory’s chief artist, admits that porcelain is a capricious material. One has to take into account 13-14 percent shrinkage, possible deformation during firing, and of course, the fact that paints require various firing temperatures.

“You can do a lot of things with porcelain; for example, a table or chandelier. We have an artist who can improvise a whole dress from pieces of porcelain,” Petrova said. “The material isn’t good except for jewelry. It’s too fragile,” she added.

Porcelain masters have their own professional language. For example, they refer to white glazed unpainted porcelain as “white ware.” Unglazed porcelain is called “bisque,” and in its liquid state it is called “slurry.”

Slurry, by the way, which is reminiscent of cocoa in terms of color and texture, is poured into porous plaster molds. Each sculpture requires several molds; for example, one for the head and one for the body. When the slurry solidifies, the parts of the sculpture are combined and sent away for firing.

The drawings on the cups and saucers seem completely black at first, but they turn gold after hours in the oven. This gold never fades, even after many years. Despite its deceptive fragility, fine china can survive for hundreds of years and stand the test of history, with all its quirks and kinks.