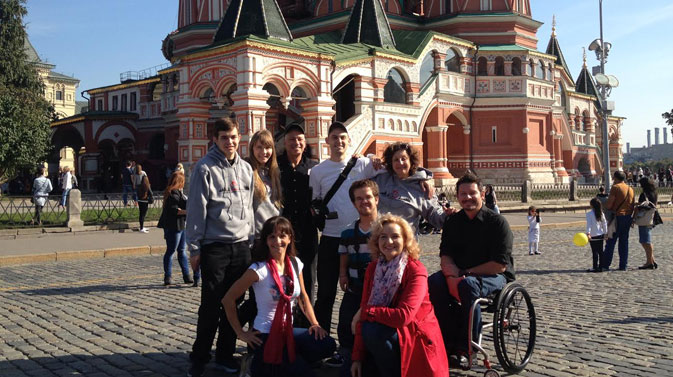 The bilateral Media Enabled Musketeers project teaches people with disabilities how to use journalism to talk about their lives.

Even as political relations between the U.S. and Russia reach lows not seen since the Cold War, joint social and cultural projects continue. The Media Enabled Musketeers, part of the U.S.-Russia Social Expertise Exchange, presented their first festival of short films in Moscow on Sept. 19.

The goal of Media Enabled Musketeers is to train people with disabilities to tell stories about their lives through short documentaries. The project unites professional journalists and film directors with people with disabilities. In addition to learning journalism skills and making films, the partners in the project, which include the Journalism Advancement and Support Center in Moscow and the Downtown Community Television Center in Manhattan, conduct community training seminars on disability sensitivity.

American journalist and documentary filmmaker Jon Alpert, who is also the co-founder of the Downtown Community Television Center, told RBTH that the idea for the project came in summer 2013 when he was taking part in a Skype conference with Olga Kravtsova from the Journalism Advancement and Support Center in Moscow and Karina Chupina, an expert trainer-consultant of the Council of Europe on youth participation and disability issues.

What Russians think about people with disabilities

The initiative received funding from the U.S.-Russia Peer-to-Peer Dialogue Program, which is funded by the State Department, the Eurasia Foundation, the U.S. Embassy in Moscow, Sony and private donors, including one of Russia’s best-known hockey stars, Vyshevslav Fetisov, who helped purchase cameras.

As Alpert, Kravtsova and Chupina continued to develop the idea, they began looking for participants. In addition to people with disabilities who would be interested in taking part, the group needed professionals on the ground who would help make the films.

“We asked here in Russia, who would like to work with us?” said Alpert. “We got no reaction in Moscow, but TV channels in Sergiev Posad (a Moscow Region town about 40 miles outside the city) and Krasnoyarsk (in Siberia, 4,000 miles east of Moscow) became very excited about the project,” Alpert said. In January 2014, Alpert took part in two training sessions for local journalists in those cities.

At the presentation of the films on Sept. 19, Alpert further explained his interest in developing this cross-cultural filmmaking project. “We like this project, because every country in the world can do a better job fighting for peace and friendship. Both Russia and my country can do a better job for providing equal opportunities for its citizens. Media can be important part of building friendship, peace and opportunity.”

The project eventually included more than 60 participants from both Russia and the U.S. The American participants traveled to Moscow for the Sept. 19 event, and the Russian group will visit the U.S. for the American debut in October.

Jonathan Novick, who made a short documentary called “Don’t Look Down on Me” about his life in New York with dwarfism, participated in the program from the American side and presented the American participants in the project at the event on Sept. 19.

Don't Look Down on Me. Source: YouTube / Jonathan Novick

“This entire experience has been nothing less than amazing. First of all, coming together to make films that share the perspective of people who might be not heard and focusing on issues we might not know about – it was extremely gratifying. But more amazing is to come here, all the way to Moscow and watch films on a big screen with all of you.”

To make his film, Novick film used a hidden camera in a shirt button to display the harassment, condescension, and ignorance he faces on a daily basis. He posted the film on YouTube on Aug. 7, and the eye-opening six-minute short has already been viewed more than 2.5 million times.

The 13 films shown in the festival were divided into several categories: little people, people with autism, visually impaired and deaf people, sports and disability in mid-life. The creators of the films addressed different issues in their everyday lives, such as choosing a career, taking care of a sick baby and falling in love. After the screenings, American and Russian participants were able to meet one another for the first time – during the course of the project, they communicated with each other online.

Mariam Magomedova from Moscow spoke for the Russian group: “I’ve heard about this program from Jon (Alpert), who I knew for long time through the American Cultural Center [in Moscow]. We went to a workshop in Sergiev Posad, and he showed us how to work with the camera. Karina Chupina hold a workshop on understanding disability imagery in the media and common mistakes that journalists or people working with disabilities make,” said Mariam, who made a film about living with cerebral palsy.

“We spoke about terminology for disabled people – like what is correct and what is not. My tutor was from the Sergiev Posad local television station, and with her I was able to feel like a real film director, although she did the montage.”

On Oct. 17 this unique collection of films will be shown at HBO’s theater in New York, and later some of them will be broadcasted on local public television stations.

Alpert is optimistic about the future of the project, although at the moment he is not sure if it will continue next year. “I didn’t expect that the films would be so good. I think everybody worked hard and over-fulfilled any expectations. I’m really happy. If everybody will be equally helpful, and we receive the same basic funding, I’m sure we will do it again.”

Regardless of what happens in the future, Alpert said that the initiative has already made a lasting impact in the lives of the participants and the partner organizations. “What is really cool about this,” Alpert said, “is that now the local TV station in Sergiev Posad is doing an investigative report as to why there is no single accessible room for disabled people in the main hotel. They do it on their own now!”