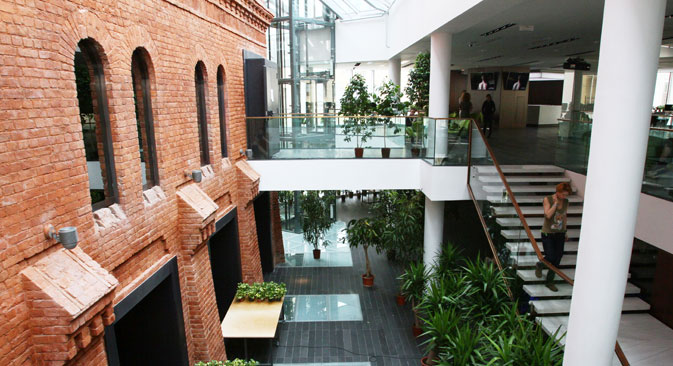 Inside the new building of the Alexandrinky theater. Source: Natalia Pietra / RG

The illustrious theater's New Stage will present its season opener on September 26.

The Alexandrinsky Theater will debut its New Stage at the start of the fall season with a production of Telluria, based on Russian writer Vladimir Sorokin's novel about the new Middle Ages.

The New Stage comprises three areas and a foyer (and it is involved in a variety of activities), and will serve as a venue not only for theatrical performances, but also concerts, educational programs, and student displays as part of the New Stage of the Alexandrinsky Theater Workshop. This space will be aimed at searching for a new language, forming a new audience, and experimentation for bold young talents.

First Deputy Chairman of the St. Petersburg Culture Committee Boris Illarionov said the city is very enthusiastic about what is unfolding on the theater's New Stage.

“This is a very interesting creative space. It also provides unique technical possibilities that don’t exist anywhere else in the city," Illarionov said. "We supported the idea of a workshop and provided subsidies. The events held as part of it are partially financed by the municipal budget. For us this is a position of principle because the workshop is a kind of factory for the directors and managers the city needs. We believe that new personnel will emerge and bring fresh ideas and interesting creative experiments to St. Petersburg’s cultural life.”

The first season was marked by the launch of several diverse premieres that fit into the theater’s proclaimed artistic policy. “We have a whole lot of plans for the new season,” said Marat Gatsalov, the chief director of the New Stage.

The first premiere of the second season will be Telluria, based on the novel by Vladimir Sorokin that came out in 2013 and was a big literary event (the book was a bestseller and made it on the shortlist for several prizes).

Yekaterina Bondarenko, the New Stage’s chief playwright, staged the novel, while Gatsalov himself arranged the set design. Also invited to work on the play was Polish photographer, designer, and lighting artist Jacqueline Sobiszewski, who has provided lighting for more than 50 theatrical productions and operas, as well as concerts. Telluria will be the first production on the New Stage to take full advantage of its diverse capabilities, including the ability to transform its space.

Premiere performances are scheduled for Sept. 26, 27, and 28. All events will be streamed online at www.thenewstage.ru, where excerpts from premieres will be available for viewing. The theater expects to start making daily online broadcasts within a year.

This is an abridged version of the article first published in Russian in Rossiyskaya Gazeta .