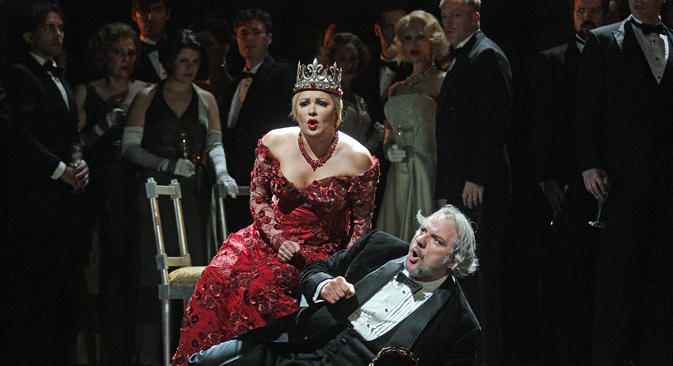 Star soprano Anna Netrebko kicks off the New York Metropolitan Opera’s televised Live in HD series on Oct. 11 in the role of Lady Macbeth in Verdi’s opera Macbeth. On Oct. 28, Netrebko will take to the stage of the Bolshoi Theater in the Opera Ball, dedicated to the 75th birthday of Russian prima donna Elena Obraztsova. Netrebko spoke to Rossiyskaya Gazeta about playing Lady Macbeth, the life of a touring diva, and plans for the future.

What is the day before a show like? Do you sleep until noon?

What are you talking about? Life is short. I get up at 7:30, make breakfast, get my son ready for school, and take him to school. Then I have a show in the evening – it’s no big deal.

Have you gotten used to changing time zones over the years?

Unfortunately, it’s impossible to get used to. On the contrary – it becomes more difficult over time. But there’s nothing I can do about it, although it’s even harder when you’re returning to Europe, where it takes a long time to adapt.

I live in Vienna, but since my son goes to school in New York, I’m torn between countries and continents.

How does your son Tiago feel about it?

He goes to school and is developing very well. He is good at math, he’s great. He mostly speaks English and studies in an American school, but he understands Russian, watches cartoons, and loves to read children’s poems by [popular Russian children’s poet] Korney Chukovsky.

At the Metropolitan Opera you are singing the highly complex part of Lady Macbeth in Verdi’s opera, which not every prima donna has dared to sing…

Yes, that was a serious gamble born out of pure intuition. It seems that when I was singing the queen in Donizetti’s Anna Bolena, I thought, “Well, why not try Lady Macbeth too?” I prepared myself very slowly for two years, learning the role step by step.

Of course, it was an enormous risk. It was particularly frightening at the Metropolitan Opera, because they have gotten used to a certain type of very strong voice in that role there. But everything worked out; the cast of singers was splendid, as was maestro Fabio Luisi.

Lady Macbeth is the first villainess in your repertoire after noble ladies like Iolanta, Donna Anna, or Adina and Norina. How do you feel about that transformation?

Surprising as it may seem, this negative character fit me like a glove – I was finally able to be myself onstage. I can’t forget how I suffered working on the role of Tatiana in Tchaikovsky’sEugene Onegin, which didn’t fit me at all, and I had to pretend every gesture, every look. Everything is easier with Macbeth. I like Verdi’s music, the image itself, where it’s as if you don’t have to ‘play’ anything. It was very interesting.

In your opinion, is Verdi not even attempting to justify the actions of the villainess, who comes to power at the expense of her husband?

That’s not how it seems to me. Judging by the music, her greed and anger only progress. And the vengeance duet erupts into something animalistic and wild, and in this production it ends in rough sex. We observe the complete moral decomposition of the heroine from the beginning to the apotheosis, where she is full of ambition in a hypertrophied form.

She is possibly not evil by nature, but vain, as millions of people on Earth are. The train of evil rushes at a great speed and cannot be stopped. But the lady’s crime is not without its consequences; she is tormented by nightmares.

You have reached a certain level. What’s next? Aida? Tosca?

Yes, there will be Aida, for which there are lots of plans. Right now I’m interested in a repertoire in which strength and technique are needed. Ahead of me are Norma and Aida, which require a full commitment of creative and physical strength.

On October 28, you will take to the stage of the Bolshoi Theater for the first time in the Opera Ball, dedicated to the 75th birthday of Russian prima donna Elena Obraztsova. Have you ever performed on the same stage with her?

Yes, I met her at the Metropolitan Opera, where we sang in Prokofiev’s War and Peace – me as Natasha and her as Akhrosimova. For me she’s the model of a real opera diva in every sense: a brilliant actress, singer, and woman. God grant her health. She’s a very soulful person, cheerful, always making jokes.

For a list of movie theaters in the United States that will show Macbeth, see Metopera.org.