Mikhailovsky Theater ready for its turn in the spotlight 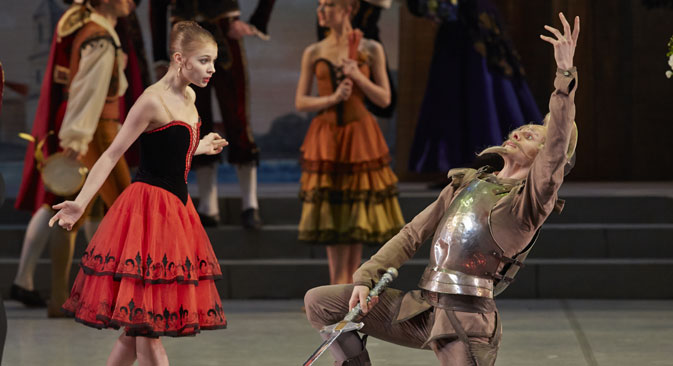 While not as well known as the Bolshoi or the Mariinsky, the Mikhailovsky Theater’s leadership hopes recent changes will bring more recognition. The Theater is making its first tour to the U.S. and will present both classic and contemporary ballets at Lincoln Center from Nov. 11-23.

For most of its history, the ballet company of St. Petersburg’s Mikhailovsky Theater lived in the in the shadow of the troupes of the Big Two of the Russian ballet, Moscow’s Bolshoi Theater and the Mariinsky Theater, also in St. Peterburg. However, today the Mikhailovsky’s dancers are getting some of the recognition they has long deserved, thanks to the efforts of new director, who was also the driving force behind its restoration.

Opened in 1833, the Mikhailovsky Imperial Theater was the third stage in St. Petersburg sponsored by the imperial court, after the Mariinsky and the Alexandrinsky Theater. The theater was named after Grand Duke Michael Pavlovich, brother of the Russian Emperor Nicholas I.

The theater was built next to Michael’s palace. In the beginning, the theater had neither a fixed repertoire, nor a resident company, so the Mikhailovsky invited foreign stars, including French, German and Italian performers, composer Johann Strauss and actress Sarah Bernhardt.

In 1918, after the Bolshevik revolution, the theater changed its name to the Leningrad State Academic Small Opera Theater and became known by the acronym created from its Russian name, Maleglot. A ballet company was formed in 1933, led by the renowned choreographer Fyodor Lopukhov.

The theater benefitted from its obscurity, according to Sofia Stanovskaya, the Mikhailovsky’s PR manager. “Not being an “official” stage like the Mariinsky or the Bolshoi, the theater became a real lab for artistic experiments, staging some of the innovative operas by Dmitry Shostakovich, as well as Prokofiev's War and Peace.”

The theater was the setting of the premier of Shostakovich’s The Bright Stream. In 1989 it was renamed after Russian composer Modest Mussorgsky and its repertoire shifted to focus on major works by classic Russian composers, such as Pyotr Tchaikovsky, Nikolai Rimsky-Korsakov and Alexader Borodin. Today its official name is the The St Petersburg Mussorgsky State Academic Opera and Ballet Theatre — Mikhailovsky Theatre.

In the post-Soviet era, the theater faced a sharp decline in attendance, which was reversed only in 2007, with the arrival of a new patron – Vladimir Kekhman. Kekhman, who was 39 at the time, made his fortune selling fruit and was widely known in the press as the Banana King.

Kekhman proved ready to do anything to make a name for the theater and himself. He rented out the auditorium out for parties and receptions and personally appeared on stage as Prince Lemon during a production of Cipollino. “It's an old dream of mine,” Kekhman said at the time. “I came to the theater to sing and dance.”

A new lease on life

Kekhman’s aggressive management techniques of as well as his tendency to interfere into the creative process were not universally welcomed. His first two years in charge were marred by internal conflict, departures, dismissals, petitions and controversies. Today, however, the turmoil has mostly ceased and the company is gaining recognition – both in Russia and abroad.

“The impulse and the momentum that Vladimir Kekhman brought both as a director and as a philanthropist, are without precedent in the international history of opera and ballet, there is no doubt about that”, said Marat Shemiunov, who began dancing with the Mikhailovsky company at the age of 14 and has experience with the troupe both before and after Kekhman’s arrival.

One of Kekhman's strengths is his ability to surround himself with good people and to make them understand his vision. Kekhman has enlisted Farukh Razumatov, a former principal dancer and assistant director of the Kirov Ballet at the Mariinsky as the Mikhailovsky’s artistic advisor for ballet and Russian mezzo-soprano Elena Obraztsova as the artistic advisor for opera. Both Razumatov and Obraztsova are household names in Russia, and their celebrity has contributed to the rebuilding of the Mikhailovsky’s reputation.

In 2011, Kekhman appointed Spanish choreographer Nacho Duato as the Mikhailovsky Ballet’s artistic director, to work with choreographer and educator Mikhail Messerer, who has served as the company’s ballet master since 2009. Messerer created new versions of the classic ballets Swan Lake and Don Quixote while Duato’s reputation helped attract new dancers to the company, including Mariinsky star Leonid Sarafanov and Natalia Osipova and Ivan Vasiliev of the Bolshoi.

Kekhman later summed up his success in an interview: “My theater is the second best in Russia. As for the best one – let the others sort this out between themselves!”

While Kekhman’s personal fortunes have since taken a turn for the worst – he was declared bankrupt in London in 2012 – the Mikhailovsky’s star continues to rise. Numerous Mikhailovsky production have been nominated for Golden Mask awards, Russia’s most prestigious awards for theatrical arts, and the ballet company is in demand abroad. After successful tours in Germany and the UK, the MIkhailovsky will travel to the United States and Japan this fall. Marat Shemiunov said the goal of the tour is simple: “Make them ask us to come back.”

In its inaugural American tour, the ballet company of the MIkhailovsky Theater is scheduled to perform from Nov. 11-23 at the David H. Koch Theater at Lincoln Center in New York. The company will then travel to Costa Mesa, California where it will perform at the Segerstrom Center for the Arts from Nov. 28-30. 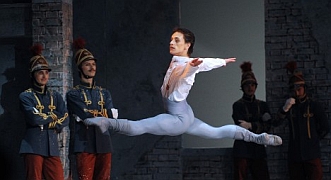 The performances will include such Russian classics Nikita Dolgushin's version of Giselle and Petipa and Gorsky's Don Quixote, along with several stagings never seen by American audiences. These include Flames of Paris, a Soviet ballet that has been remade by MIkhailovsky ballet master Mikhail Messerer; and Three Centuries of Russian Ballet, an overview of Russian styles through the ages made up of excerpts from Petipa's La Halte de Cavalerie, Shostakovich's Glass Concert and Prelude, a unique production created by Mikhailovsky Artistic Director Nacho Duato specifically for the Mikhailovsky company, with music by Handel, Beethoven and Britten.

Producer and tour organizer Sergei Danilyan said that he has been looking forward to bring the Mikhailovsky to the American audience for a long time. “I think the Mikhailovsky company has long been in the shadow of the Mariinsky. One of the key factors for the success will be not only the originality of the repertoire, but also the presence of the stars loved by New Yorkers” Danilyan said.

Many well-known Russian dancers will appear on the tour, incuding Leonid Sarafanov, Irina Perren, Ekaterina Borchenko, Angelina Vorontsova, Oksana Bondareva, and Ivan Vasiliev and Natalia Osipova, who has performed as a guest dancer with the American Ballet Theater.