Fiction may distort realities of Russia 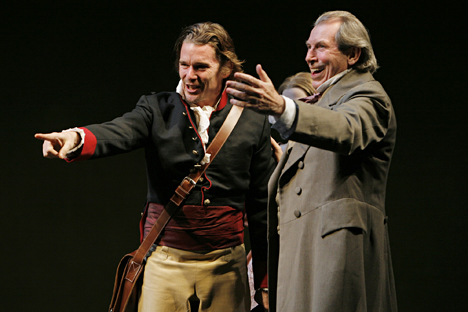 Ethan Hawke (L) and Richard Easton in a scene from ``Voyage,'' the first part of ``The Coast of Utopia,'' playwright Tom Stoppard's trilogy at the Vivian Beaumont Theater in Lincoln Center, 2006. Source: AP

Olga Panova, a professor at the Moscow State University believes that foreign authors have tended to focus too much on "North Eastern exoticism" while approaching Russian history and culture.

Since time immemorial Russia has been an object of fascination for foreign writers. It is a country that has so much in common with Europe yet resists all attempts to define it as European. Even Shakespeare makes several references to Russia, from bringing in disguised characters dressed "like Muscovites or Russians" in "Love's Labour's Lost" to Macbeth's declaration "I am as brave as any other man. Come at me in the form of a rugged Russian bear, an armor-plated rhinoceros, or a tiger from Iran."

However, this idea of Russia as a vast, mysterious place where bears roam the wilds and deep-thinkers like Dostoyevsky prowl the city streets has frustrated some academics, who would rather see a more balanced view of Russia in literature.

Among contemporary high-profile fiction works featuring Russians is "The Master of St. Petersburg" (1994) by South African author J.M. Coetzee, who has won both the Booker Prize and the Nobel Prize. Set in the second half of the 19th century, the novel tells the fictitious story of Fyodor Dostoevsky's relationship with his stepson, Pavel Isayev. In the book, the great writer tries to unravel the enigma of Pavel's death and figure out if it was suicide or murder.

The novel was published to rave reviews in the western media, with The Wall Street Journal calling it "a fascinating study of the dark mysteries of creativity, grief, relationships between fathers and sons, and of the great Russian themes of love and death."

Olga Panova, a professor at Moscow State University, was less impressed. For her, the book played up to what she calls the "predictable exoticism" of fiction about Russia. She claims that "Dostoyevsky in the novel is almost a caricature, a collection of clichés, including anti-Semitism, excesses in everything, groveling before the authorities and slovenliness in day-to-day life."

Panova also attacks the story of the relationship between Dostoyevsky and his stepson. "This is presented in an apparently Freudian context," she says. "However, this analysis of the Russian genius' psychology looks like a secondary school essay, compared, for instance, with the classical analysis by Freud himself in his 1928 article 'Dostoyevsky and Parricide.'"

Such reactions to what is clearly a work of fiction – albeit one that, on the face of it, explores a real character – highlight the complex interaction between national pride and the perception of your country from abroad. The impact that historical figures - and by extension their perceived misappropriation - have on personal identity is a fascinating area for study.

In any case, J.M. Coetzee is widely read in Russia, and even if he does somewhat exaggerate his portrayal of Dostoyevsky, Russian readers still value his insights into the human psyche - insights that, ironically, Dostoyevsky also sought to make.

British playwright Tom Stoppard's trilogy of plays "The Coast of Utopia" are an example of work that portrays Russia and has achieved popularity inside the country. The plays, which focus on philosophical debates in 19th-century Russia that featured, among others, writer Ivan Turgenev, critic Vissarion Belinsky and great revolutionary anarchist Mikhail Bakunin, have been successfully staged at Russian theaters.

"The trilogy's main merits are a sincere and profound interest in Russian culture and a desire to paint 19th-century Russian thinkers, public figures and writers in all the complexity of their characters, to show how broad, diverse and important relations between Europe and Russia were," Panova says.

The problem is that many readers - and this does not only apply to westerners reading literature about Russia - take what they read in fictional works as the truth. Not all writers will approach the complex subject of Russia with the same respect and research as Stoppard, so readers are advised to employ a healthy dose of skepticism when reading books about Russia.

Looking at Russia with nostalgia

For example, "Johanna Romanowa," by German author Helga Hegewisch is set in late 17th-century Russia. It tells the story of Tsar Alexis' fictitious daughter Johanna, who, according to the novel, was supposed to succeed Alexis onto the throne instead of Peter I. However, the daughter of Alexis Romanov could not possibly be called Johanna - it is a German name, which the Romanovs, as followers of the Orthodox faith, would never have used.

Fiction, though, is fiction, and plenty of Russians, too, have distorted views of the West from literature they've read. Just don't expect to see a bear or Dostoevsky on your next trip to St. Petersburg.

There are plenty of examples of western novels that use famous Russians as characters. Here is a short selection for interested readers.