Plov: Worshipping at the altar of the Uzbek food gods 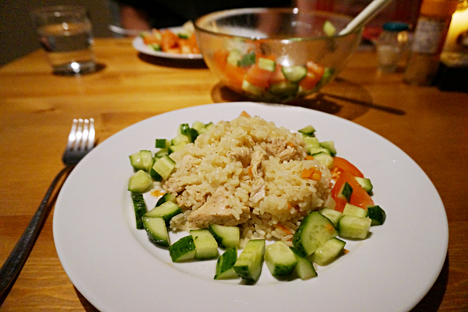 The traditional Central Asian rice dish was one of the contributions the Soviet republics made to Russian cuisine.

Trying to make plov is like trying to copy Van Gogh – you know you’ll never get there and feel cheeky to be even trying, but the temptation is strong.

Plov is an Uzbek dish that traveled all around the Soviet Union and became popular everywhere. The difference between the plov in Uzbekistan and almost anywhere else is stark, though. In Uzbekistan they treat food with all the seriousness and almost religious admiration it deserves.

There are rules to follow, and, if need be, sacrifices to be made. I once cooked plov and samsa (a type of filled pastry) with an Uzbek friend: we made our own phyllo dough, which needed a room with warm temperatures and no breezes.

When after 4 hours I begged my friend to open the window, for a second she stared me down as if I were a non-believer. I got the same look when I wondered if a slightly different type of rice to the one she used would work for plov. I learned to obey the rules and not ask questions, out of respect for the Uzbek food cult.

In the rest of the Soviet Union however, plov was treated like any other dish – if necessary, substitutions were made. And sometimes they were made even if they were not necessary. As a result, cafeterias served what my grandmother described as “rice porridge with fried meat, onions and carrots.”

Delicious TV: Uzbek Pilaf, make a lot or none at all

The one place that served real plov was the Uzbekistan restaurant – one of the oldest restaurants in Moscow. My grandmother says she and my grandfather used to go there a lot, as they did to many other Moscow eateries: “Restaurants were not that much more expensive than cafeterias, especially for lunch, so we used to go out all the time. After trying all the restaurants we decided Uzbekistan was the best. We couldn’t get enough of the Uzbek food.”

This was a rare occasion when I was envious of something in the Soviet era.

I felt jealous again when, some 50 years later, my husband taught the restaurant’s manager English and got free meals as well as being paid for the lessons.

I should explain that, although the Uzbekistan Restaurant still exists, the prices have very much adjusted to the capitalistic way of things. What was once everyone’s favorite is now a place only the better-off part of the population can enjoy.

Vladimir Putin, Jack Nicholson and Mike Tyson have dined there. I wouldn’t be able to convince my grandmother to go there now; the restaurant is too different from what she was used to.

As for making plov at home, I thought what my grandmother made was real plov, until I made it myself and a friend told me it was “very nice….risotto.”  She was right. The most important parts of plov are the spices and the meat, mostly lamb.

This time when I made my “plov”, also with chicken, as decent lamb is hard to come by near where I live, it turned out as nice risotto again, but I knew what I was up against. I have come to terms with the fact that when I want real plov I have to travel across town to my Uzbek friend’s tiny kitchen – as do a dozen of her friends. Now that she lives in North Dakota I will just have to travel there. And it will be worth it. 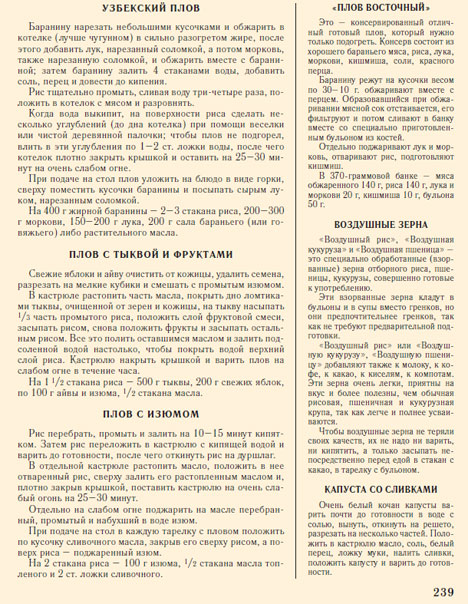 The recipe from the Soviet Cook Book, page 239. Click to enlarge the image

Cut the onion and carrots into thin strips.

Cut the lamb into small cubes and fry in a large skillet or pot (preferably cast-iron) in fat. When it is cooked, add the onio, then the carrots and fry together with the meat. Then add to this mixture four cups water and salt and pepper to taste. Bring to a boil.

Rinse the rice three or four times, then add to the pot with them meat and smooth over the top.

Close the lid tightly and cook for 25-30 minutes on very low heat.

Serve the plov in a dish with sides, with the lamb cubes on top. Sprinkle with sliced raw onions.

Read more: Borscht – A Ukrainian dish no Russian will turn down>>>