In the service of the state: How the Russian Revolution changed advertising 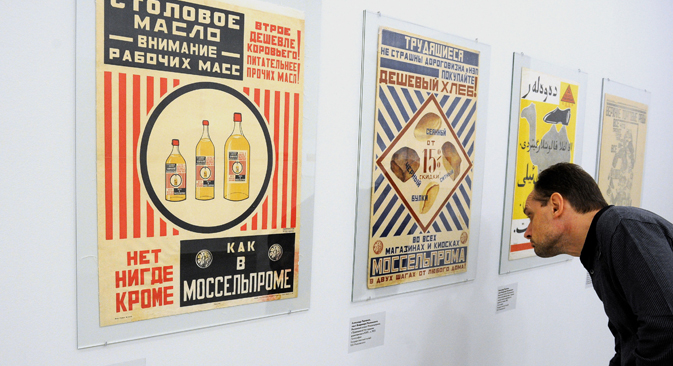 The Russian Revolution of 1917 marked a sea change in the way goods and services were advertised in the country, with the new communist ideology dictating strict restrictions on conventional advertising. While in western countries firms continued to advertise commercial goods, the new Soviet propaganda had social and political aims, and was state-sponsored.

Before the events of 1917, commercial advertising was in the process of developing in the Russian Empire much as it was in western countries, with billboards, posters, and ads in newspapers and magazines part of the everyday social environment.

But the October Revolution changed everything. The Bolsheviks eliminated private property and established new rules and a planned economy that categorically excluded competition. Such an economy had no need of commercial advertising, which simply had no place in the Soviet system. However, social advertising and propaganda flourished in its place: The USSR devoted an exaggerated amount of attention to ideology and everything related to it.

"When the Bolsheviks came to power," says Svetlana Shomova, an expert on the history of advertising and professor at the Higher School of Economics in Moscow, "along with well-known decrees such as the Decree on Land and the Decree on Peace they promulgated a document that could have been called the Decree on Advertising.

“In November 1917 Lenin signed a decree on introducing a government monopoly on announcements,” explains Shomova. “Publishing paid announcements in periodicals was from then on a government prerogative and was possible only in publications owned by the government or by the Councils of People's Deputies. This immediately stopped the free flow of information and the government acquired full control of advertising."

Thrust into a civil war and struggling to survive, the young Soviet republic had many enemies, from without and from within. This situation presented new challenges for the country’s new propaganda designers, first and foremost challenges of a political nature. Certain posters produced during this era ("Have you volunteered?" and "Beat the Whites with the Red Wedge!") later became seen as the classiс models of Soviet propaganda in the Russian Civil War.

Politics aside, there were plenty of other problems that the advertisers and propagandists  were called upon to solve, with mass illiteracy a key concern.  The country was also in need of loans and needed to convince people to buy bonds. Despite the hunger and devastation crippling the young nation, the Bolsheviks spared no expense on agitation, with propaganda trains and steamers racing all over the country promoting the new government. The propaganda machine attracted the best talents: The great poet Vladimir Mayakovsky participated in the ROSTA Satire Windows, a series of propaganda posters with biting rhyming calls to action produced by the Russian Telegraph Agency.

In the beginning of the 1920s, the Bolshevik government launched the NEP (New Economic Policy) for a brief period, which temporarily permitted private production and trade. This was the age of expensive restaurants, furs and champagne; in a certain sense a renaissance of the extravagant bourgeois life that had existed before the revolution.

Thanks to free trade there was a temporary upsurge in advertising creativity. Two members of the avant-garde, the futurist Mayakovsky and the artist Alexander Rodchenko, formed an alliance called Reklam-Konstruktor.

"Rodchenko and Mayakovsky's advertising was created in the constructivist style," says Tatyana Kozlova, a member of the Russian Designers Union. "It drastically differed from the modernist design that had until then enjoyed global with its carefully planned harmonic colors and feminine, rounded letters. The artistic breakthrough consisted in straight rigid lines and catchy brazen colors.

“The posters transmitted the message that now we are living in a different way,” says Kozlova. “The world hadn't seen this kind of aesthetics.” She points out that even today, people all over the world have a great interest in Russian constructivist posters - Soviet advertising posters still command high prices at world auctions.

The war and the post-war period

The most vivid advertisers during WWII were the Kukryniksy, a collective name for Mikhail Kupriyanov, Porfiry Krylov and Nikolai Sokolov, as well as Boris Yefimov, who lived until the age of 109, passing away in 2008. They created antifascist posters and drew antiwar caricatures for magazines. In one of the posters they depict Nazis marching and gradually transforming into gravestone crosses. 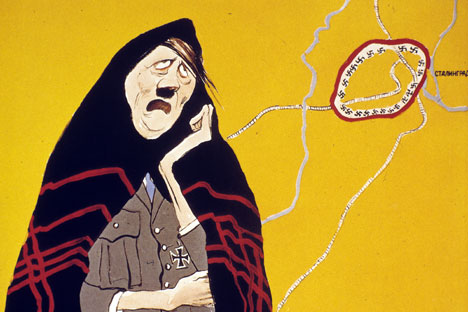 Eras are reflected in the advertisements they produce. "Advertising evolves in the space left for it," says Svetlana Shomova. "After the revolution we saw the flourishing of political advertising, in the 20s-30s social advertising, (linked to the fight against illiteracy, for example). After the end of WWII, posters promoted the most important issue: Let's restore the national economy! And in the 50s and 60s, when industries felt confident, the country began developing window displays, exhibitions, trademarks and trade posters…"

The development of television

In the 60s and 70s Soviet advertising mastered television. There was no commercial television in the USSR; all channels were fully financed by the government. Advertisements never interrupted TV broadcasts - they were placed only after the programs, usually in the form of short educational films, not the traditional 30-second clips we see today.

For example, in the advertising film about the Zaporozhets car the presenter would talk about the vehicle's merits, then he would interview the director of the car dealership, who would complain that new cars weren't being produced and the shop therefore had to sell the former model, etc.

"The promotion of goods and services was not the main objective of the advertisements," says Shomova. "Life was far from being luxurious and abundant, therefore the goal of advertising was to provide information, to educate, to create behavior models and cultural practices."

Posters and banners shaped everyday life. The well-known posters reading "Bread is a national goodness - take care of bread" and "When leaving, turn off the light" taught certain rules of behavior and constructed a value system.

Commercial advertising also existed, but it did not promote individual goods - it promoted networks such as state insurance, the Intourist travel agency, state banks and Aeroflot. The advertising campaign with the common "Fly with Aeroflot planes" slogan was directed also at foreigners who used this airline, the only one in the USSR.

In 1985 Mikhail Gorbachev came to power and introduced a policy of gradual liberalization. The media began criticizing social inadequacies in the country, call-in shows appeared from the U.S., as well as programs for the youth in which TV hosts no longer spoke the bureaucratic language of the state but instead talked about current issues in an informal way.

As the government permitted private enterprise and advertisements gained a more commercial nature, they began to resemble western advertisements. The first adverts were characterized by a naivety due to lack of experience, but as the Soviet, and then the Russian, advertising space gradually entered the international dimension, cultural differences began to disappear.