Soul food for the fall: Roasted pumpkin and sage soup 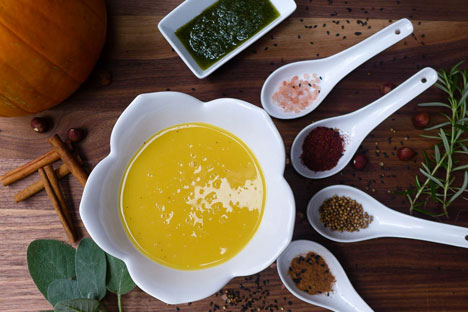 Symbolic of October - and more recently of Halloween - pumpkin features in a number of classic dishes that sit on Russian tables at this time of year. Jennifer Eremeeva explains how to prepare a pumpkin soup that will keep you warm throughout the Russian fall, whatever the weather.

We shouldn't be surprised by a freak snowstorm in mid-October - in fact, we probably shouldn't even call it "freak" - not when we live in Moscow, but last week's snowfall caught me unprepared.

For most of early October, “harvest sage” had floated around my ‘to-do’ list in a half-hearted sort of a way: Not urgent enough to force its way to the top of the list, but not insignificant enough to be discarded entirely. I had to scramble to get the job done before the sage was buried.

Gardening is the only domestic skill I lack, but I managed to grow a bumper crop of sage this summer on my Moscow balcony, a lot more than I could use. My plan was to preserve it by making sage oil: a simple process of whizzing fresh sage leaves up with a little bit of olive oil, lemon zest and salt.

You can then freeze it in individual batches, and add it to stews, marinades, risottos and sauces. Sage is a great accompaniment to the entire root vegetable family, coaxing out their natural nutty notes; so when I came across the first crop of pumpkins, it was definitely time to move into autumnal soup mode.

The Russian word for pumpkin is tykhva and it is an umbrella term for anything in the greater yellow and orange root vegetable family, including butternut and acorn squash. It is a popular autumnal ingredient, which appears in classic 19th century cuisine, enhancing milky and sweet soups and millet kasha.

Packed with nutrients and able to be stored in a root cellar throughout the long Russian winters, pumpkins continue to sustain the peasant population in the countryside to this day.

These days pumpkin soup has supplanted the traditional kasha as the most popular pumpkin dish, and is tediously ubiquitous this time of year, thanks to the autumn harvest and Halloween.

15 ml (1 tbsp) coriander seeds, toasted and pounded in a mortar and pestle;

Sage oil (sage leaves and olive oil mixed in a blender) for drizzling;

It's a simple recipe, to be sure, but too often it can end up watery and tasteless, or the chef overcompensates by bludgeoning the blandness with too much heat, or overdoing the curry or the chili. A few extra steps and a few special ingredients can take pumpkin soup from dull to delicious in under two hours.

When it comes to cooking pumpkin and butternut squash, like beets, the best approach is to roast the raw flesh so that the natural sugars slowly caramelize, which boosts the flavor and depth. An injection of raw carrot or pumpkin juice is not mandatory, but it does add a more concentrated flavor.

I like to use coconut milk to finish the soup, because it helps create the velvety-smooth texture, which makes pumpkin soup so delectable. A careful selection of spices in the soup, with the sage dominant, and a nice fusion of garnishes at the end make for a hearty and satisfying soup that will ward off even the most surprising of snowstorms.

3. Cut the pumpkin into wedges, and use a sharp knife to remove the pulp and the seeds.

4. Drizzle olive oil on the pumpkin and carrot flesh, and generously season with salt and pepper. Place them on the cookie sheet and roast for 40 minutes, or until the flesh of the vegetables is soft and pliant. The tip of a small knife should be able to go into the flesh with ease.

5. Remove the pumpkin flesh from the tough outer skin and roughly chop into pieces. Set aside with the carrots.

6. Heat about 30 ml (2 tbsp) of olive oil in a heavy-bottomed Dutch oven. Sauté the onions over medium heat for 3-4 minutes. Sprinkle the brown sugar over the onions when they become translucent. Reduce heat and cover the pot. Cook for an additional 5 minutes, allowing the onions to slowly caramelize.

7. Add ginger and spices and cook through for 2 minutes. Add the remaining ingredients, except for the heavy cream, bring to a simmer, then cover and cook for 35 minutes.

8. Remove the bay leaves and cinnamon sticks. Add the heavy cream or coconut milk, then process the soup in batches in a blender or food processor until thoroughly combined and velvety-smooth.

9. Serve the soup in warmed bowls, then drizzle with the sage oil. Finish with toasted sesame seeds and crushed cashew nuts.

View the gallery: A spooky Halloween tour beyond the grave>>>