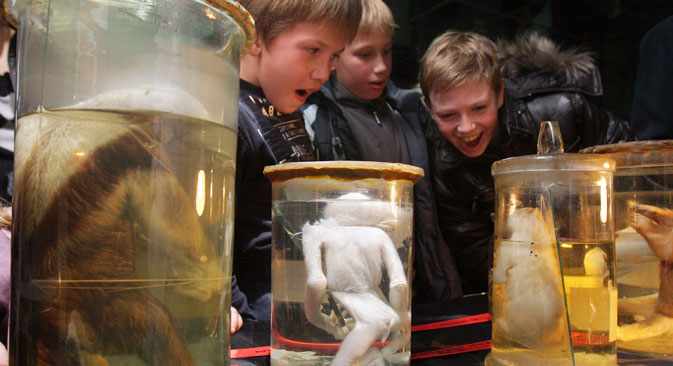 The museum is known primarily for its collection of "freaks" - anatomical curiosities and anomalies, many of which were acquired by Peter himself on his travels around Europe. Source: PhotoXPress

The famous St. Petersburg Kunstkamera, the first museum to be built in Russia, turns 300 this year. RBTH reviews the history of the museum's unique collection, which includes Peter the Great’s notorious “freaks”, and reports on its latest news.

St. Petersburg’s Kunstkamera museum, famous for its colorful display of human and animal “freaks” collected by Peter the Great, is marking its 300th anniversary this year.

Although the museum opened in 1714, the Kunstkamera's history is considered to have originally begun with Peter's long trip abroad known as the Grand Embassy (1697-98), when the tsar went to Europe to study shipbuilding. During his travels he gathered many impressions about European life and culture. In particular, he was fascinated by the kunstkameras that were appearing on the continent and, inspired by what he had seen, he decided to create his own cabinet of curiosities.

Kunstkameras began to appear in the 16th and 17th centuries as collections of rarities in the palaces of the educated European nobility. The word kunstkamera means a chamber with unusual creations, those created by man and those created by nature. Along with stuffed exotic animals and rare mineral and seashell samples, the chambers also contained works of art.

Peter decreed that anything he found amazing was to be brought to the Russian Kunstkamera. The collection was supposed to show the diversity of the world and the mystery of nature. In 1706 the French Journal de Trévoux wrote that the muses and science were moving north, "where the current Tsar Peter Alexeyevich is intent on enlightening his country."

The foundation date of Russia's first museum is usually considered to be 1714, when, according to Peter's decree, all the articles he collected during his travels abroad were moved from Moscow to St. Petersburg. In the beginning, in order to attract visitors, the Kunstkamera offered treats and gifts. But the museum quickly became famous and soon visitors had to buy tickets.

Peter's collection moves to a house

The main difference between the St. Petersburg Kunstkamera and its European counterparts was the reason for its opening. The museum had been created not as a private collection, but as an educational institute. "I want people to look and learn!" said Peter about the Kunstkamera, according to tradition. 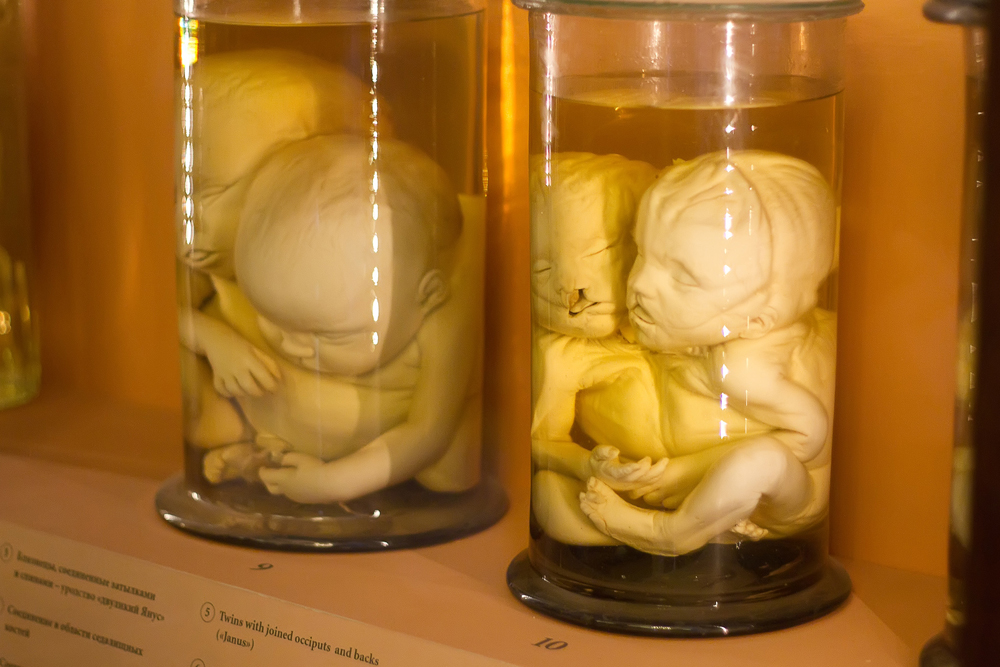 Click to view the photogallery: "Two-headed babies and other exhibits of Peter the Great’s Kunstkamera".

In the 18th century the museum moved to a building on the eastern tip of Vasilievsky Island. According to legend, Peter had chosen the location himself after seeing a pine tree of an unusual form. The Petrine Baroque building that was constructed on the spot later is still considered one of the symbols of the city. The majestic structure on the banks of the Neva is crowned by a tower with an armillary sphere, symbolizing the Solar System.

In the first years of its existence, the Kunstkamera collection, along with rare books, devices, instruments, weapons and natural rarities, also contained "live" exhibits. These were children born with physical defects who lived in the Kunstkamera and received a high annual income.

As years passed the Kunstkamera transformed from a collection of curiosities and oddities into a real scientific collection. When, in 1724, Peter founded the Russian Academy of Sciences, the Kunstkamera became its first institution. Having become academic, the museum subsequently concentrated on collecting ethnographic rarities: clothes and household items from various peoples. Ever since then the museum's permanent exhibition has been dedicated to the native cultures of North America, Asia and Africa.

But it is the Kunstkamera's collection of "freaks" that has always been most popular among visitors. This is an array of anatomical rarities and anomalies embalmed in alcohol. Peter had bought most of the articles from a Dutch anatomy professor, Frederik Ruysch. Ruysch had collected and treated the "freaks" for several decades and agreed to sell the collection to the Russian tsar, hoping that Peter would leave it for posterity. The embalmed embryos with their inborn anomalies shocked the 18th century public, and continue to do the same to today’s visitors.

The modern Kunstkamera is one of the biggest ethnographic museums in the world, and actively carries out scientific research. The museum contains more than one million exhibits and is constantly enlarged thanks to expeditions and new acquisitions.

Every year the Kunstkamera organizes about 50 scientific expeditions to various regions of Russia, as well as to Asia and Africa. Each expedition enriches the museum with new exhibits. Museum Director Yury Chistov says that the Kunstkamera no longer "fits" in its historical building. The administration is currently in talks with the city authorities about the possibility of creating a separate storehouse for the collection.

The museum is broadly known for its educational programs and thematic guided tours on various subject matters: from the history of costumes to anthropology. Currently, only general orientations are available in foreign languages, but the Kunstkamera management promises to add more programs for foreign tourists.

"Our collections are interesting for the foreign visitor because they were collected long before those that today are exhibited in Europe," says Chistov. "All our ethnographic exhibits are unique because they were not influenced by European culture."

During the press conference dedicated to the Kunstkamera’s 300th anniversary, President of the Russian Museum Union Mikhail Piotrovsky paid tribute to the museum: "Along with the Kunstkamera's anniversary we are celebrating 300 years of Russian museology. This is the first and the oldest museum in our country and it is also a very important landmark in the development of museums in Europe."