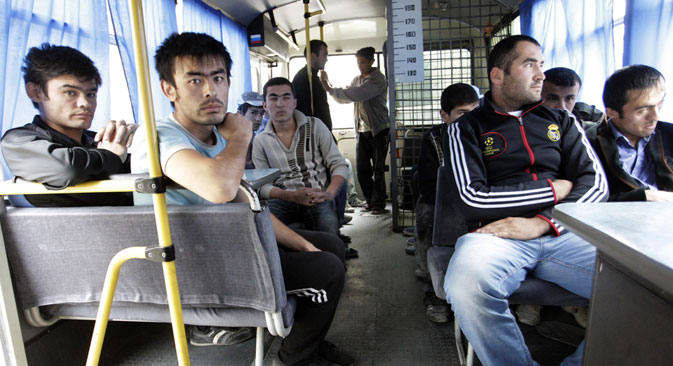 As of Jan. 1, 2015, migrant workers from countries with no visa regime with Russia will have to fulfill a number of conditions, including buying a license and insurance, passing exams, and passing a medical test. The move is part of a migration reform aimed at cutting the proportion of illegal migrants in the country. Observers are sceptical that the initiative will work, however, and say it will only drive migrants underground or dissuade them from coming to Russia altogether.

Russia has launched an ambitious new program aimed at slashing the numbers of illegal migrant workers in the country.

Starting on Jan. 1, 2015, migrant workers from countries that do not have a visa policy with Russia will be able to work legally only with a license, which will have to be purchased at a higher rate than before.

Foreigners will have to pass tests in the Russian language, history and basic law, as well as pay for medical insurance and examinations, along with fingerprinting procedures.

The authorities hope that the reform will cleanse the labor legalization system of speculators and will make it transparent, while the funds from the licenses will be used to patch up holes in regional budgets.

The license system already exists in Russia, but working according to this system was possible only for those working for private individuals. Corporate entities could hire migrant workers only through quotas: The employer was obliged to obtain permits to hire the foreigners, but the quantity of permits was limited.

The new rules remove this barrier and the quota procedures. Migrants will now be able to work also for corporate entities. In addition, the cost of the permits will increase. There will no longer be the national 1,200-ruble ($21) license. The regions will be able to fix their own price, in accordance with their economic and demographic situation.

For citizens of countries with which Russian has a visa policy, the working quotas will be maintained. According to the Federal Migration Service, the latter constitute less than 20 percent.

Most migrant workers arrive in Russia from the CIS countries, primarily Tajikistan, Uzbekistan, and Ukraine. Citizens from Ukraine and Uzbekistan will need a visa to enter Russia from 2015.

Cutting out the middlemen

Legislators and experts admit that the decision to cancel the quotas was correct, since this labor recruitment instrument only proved to be corruptive and inefficient.

"The quotas were created according to the employers' preliminary requests," explains Olga Chudinovskikh, Director of the Center of Migration Policy at the Higher School of Economics National Research Institute in Moscow. "This led to speculators registering inexistent companies, then accumulating quotas and selling them."

The first goal of the new migration policy will be to drive fraudsters out of the market. As of now it will no longer be the employer or other interested structures that will receive the license, but the migrant himself. The second goal is to give regional authorities room for maneuver in the event circumstances change in the labor market.

According to the new rules, Russia's regions will be able to regulate not only the price, but also the quantity of the licenses. "The quotas will be issued for a long but temporary period," says one of the reform's authors, State Duma Deputy Vladimir Pligin. "But the labor market is always in motion, and the economic situation can also change, as we've just seen.

“If a region decides that in one field or another it has a surplus of workers, it can stop the issue of licenses at any time. All this makes the new system of hiring foreign workers more flexible in comparison with the previous system. It takes into consideration the needs of the field and those of the regions."

The flexibility of the new approach can be seen in Moscow, for example, which, a few days after the president officially approved the migration reform, raised the cost of the license by more than three times, to 4,000 rubles ($78) a month. The capital's authorities believe that raising the price will bring 12 billion rubles (about $2,350,000) into the budget.

Vyacheslav Postavnin, director of the Migration XXI Century Foundation and former deputy director of the Russian Federal Migration Service, estimated that the new rules will cost the migrant about 100,000 rubles (about $2,000) a year. Besides the license, migrants will need to pay for the language test, the medical insurance and exams, as well as the fingerprinting procedures.

Coming out of the shadows

Experts doubt, however, that it will be possible to solve the migration problem with the licenses. "Moscow thinks that it has many migrants and that they do not pay," notes Nikolai Kurdyumov, Vice President of the Social Council at the Federal Migration Service and Chairman of the International Working Migration Alliance.

"Only time will tell if the migrants will pay or withdraw into the shadows. But I think that the majority will not be able to make the necessary payments, since there are also the living costs."

Karomat Sharimov, President of the Tajik diaspora of Moscow and of the Tajik Migrant Worker's Movement, agrees. "Acquiring permits was expensive before," he says. "But now it is even costlier. People will just stay home."

In comparison with the West:

Russia first encountered serious problems with illegal immigration in 1991, when after the collapse of the Soviet Union a wave of migrants from former Soviet republics flooded the country. There were a number of reasons for this. Firstly, borders between republics within the Soviet Union had been open to all its residents and relocation did not require visas or registration; therefore there was no concept of a ‘migrant’. Secondly, most of the Soviet republics received substantial subsidies from Moscow, which is why separating from the union had a negative impact on their economies and resulted in an outflow of migrants in search of a livelihood in Russia.

According to the Federal Migration Service’s data, most of the migrants who legally came to Russia in 2013 were from Uzbekistan (118,000 people), Ukraine (55,000) and Tajikistan (50,000). However, indications are that this is merely the tip of the iceberg.

Until now the only way to fight illegal immigration was through administrative bans and by restricting entry and residence for foreigners. Only in 2014 did Russian officials decided to introduce procedures based on the experience of Europe and the U.S., where governments are trying to solve the problem of illegal immigration by way of so-called amnesty programs that legalize migrants.

The U.S. and France have been using this procedure since the 1980s, while Italy and Greece adopted it in the 1990s. In the U.S., applicants must pay a significant fee when submitting their application. Some countries do not require a fee and in others the fee is insignificant. The result of a successful application, as a rule, is a temporary (a year minimum) or permanent right of residence, which in all cases grants the right to work.