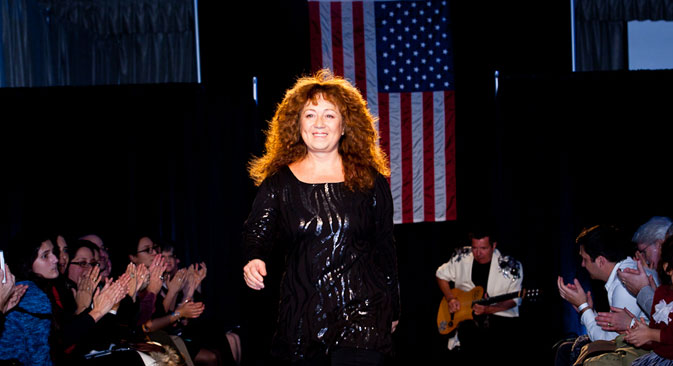 The Russian Club at the University of Maryland, Baltimore County hosted an event featuring the work of designer Evgenia Luzhina-Salazar.

On Dec. 7, Maryland-based, Moscow-born fashion designer Evgenia Luzhina-Salazar presented a collection of her work from three consecutive years at New York’s Couture Fashion Week at the University of Maryland, Baltimore County (UMBC) in an evening sponsored by the Russian Embassy, the Russian Center of Science and Culture, the RussianDC.com and the UMBC Russian Club.

“I believe that the real culture of a nation, you can’t learn by watching the news or only paying attention to politics, but by talking to real people, eating food, listening to music,” said Elena Volosina, president of the UMBC Russian Club. “From this conversation comes a deeper cultural understanding. This is how you introduce your culture to outsiders.”

Volosina and UMBC Russian instructor Vira Zhdanovych conceived the event and convinced the sponsoring organizations that a cultural evening of this kind was necessary in these shaky political times.

“We just didn’t let them say no to us,” said Volosina.

Most of Luzhina-Salazar’s color palette was classic Russian red and gold and black, with handsewn sequin-and-lace embroidery applied in flourishes and curls on the fabric. Luzhina-Salazar specializes in couture “one-of-a-kind” designs, but took pains to avoid calling herself a designer.

She doesn’t sell her creations; she makes them because she enjoys seeing her dresses on the models and because, according to her, the models who wear her clothes feel beautiful. “I can’t get them to take the dresses off,” she said.

Although Luzhina-Salazar doesn’t care to label her dresses as “Russian,” it is clear that she channels her heritage in the shapes and patterns of her clothes. “If you think very widely,” said Luzhina-Salazar, “there is no such thing as Russian fashion or American fashion or French fashion. For me, fashion is just beauty. If you see a beautiful girl or a beautiful shape, it doesn’t matter to which country the clothes belong.”

According to the 2000 U.S. Census, Baltimore County has one of the largest populations of people with Russian heritage in the United States. Nearly 20 percent of residents in Pikesville, a nearby Baltimore suburb, identified as having Russian heritage.

There is little to represent that culture publicly, however, except for a cluster of Russian grocery stores. Baltimore’s universities have not historically had ties to influential Russian cultural organizations, unlike their counterparts 40 miles to the south in Washington, DC, where some of the nation’s preeminent Russian studies departments are based.

Zhdanovych hopes to change this. While UMBC does not belong to the established D.C. consortium of universities, the school has gently pushed its way into the circle of institutions that regularly interact with the Russian Embassy and the Russian Cultural Center.

The Russian Embassy even sends a bus for UMBC students to attend various events on the embassy grounds.

Volosina is also glad that UMBC is getting more recognition for it’s previously unsung qualities. She pointed out that UMBC is one of only several American universities (including Yale and the University of Chicago) that boasts a Russian Choir.

Dr. Steven Young, the UMBC faculty liaison for the choir, acknowledged that the original reason for creating the chorus in 1996 was to help students overcome pronunciation difficulties while exploring Russian folk songs, but has transcended that purpose.

Led by Slava Liberman, a veteran choral instructor originally from Belarus and fronted by Zhdanovych, a classically trained vocalist from Kiev, the Russian Chorus is a unique feature of the Russian studies major at UMBC.

The Evening of Russian Culture and Couture was a prominent example of the school’s innovative approach to addressing Russian and American cultural and political differences in a real-life setting. The event succeeded in showcasing the classical aspects of Russian tradition for an audience that otherwise would not have access to that side of Russian culture.