Instagrammers get up close and personal with Russian avant-garde art 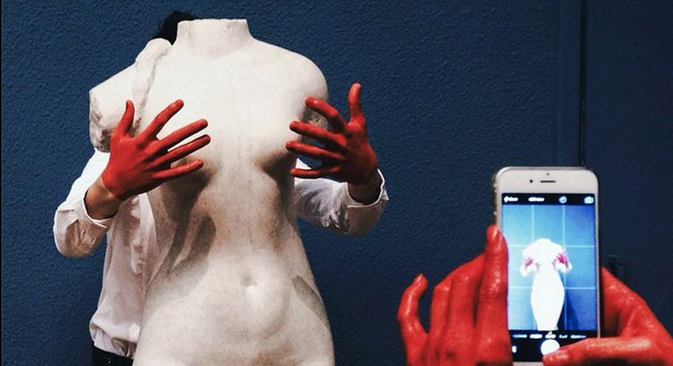 Fans of the photo-sharing network Instagram have been given the chance to snap away behind closed doors at Moscow’s Tretyakov Gallery as part of an ongoing project to document theaters, museums and galleries after hours. Participants in the #emptytretyakov event discovered what the Russian masterpieces ‘Black Square’ and ‘Bathing of a Red Horse’ look like with Instagram filters.

The Tretyakov Gallery is a well-known attraction to Moscow tourists, primarily for its distinctive building near the Tretyakovskaya metro station in the city center and its collection of 19th-century Russian paintings. Entrepreneur and millionaire Pavel Tretyakov collected these paintings a century and a half ago for the special purpose of presenting them to the city.

The gallery’s second building, dedicated to 20th-century art and built on Krymsky Val during the Soviet period, is less well known but no less deserving of attention. Visitors to the second gallery can see the largest collection of Russian avant-garde art, featuring work by greats like Malevich, Chagall, Petrov-Vodkin, and other notable artists.

Young Moscow-based photographers have been given the opportunity to browse the empty Tretyakov State Gallery and depict famous 20th-century avant-garde paintings by the likes of Kazimir Malevich and Marc Chagall through Instagram filters.

On Dec. 8, the Tretyakov State Gallery’s second branch on Krymsky Val – devoted to 20th-century Russian art – opened its doors to 14 Instagrammers, who were invited to breathe new life into the gallery’s paintings and share their impressions with followers as part of the ongoing #empty project to document theaters, museums and galleries after hours.

“People often ask me what I am guided by when selecting the dress code for the project. When I was thinking over the image this time, what came to mind the most was Petrov-Vodkin’s work “Bathing of a Red Horse.” The horse is majestic, monumental, full of power. It’s as if I see him jumping out of the frame as he races off! It was this work of art that served as the inspiration for the dress code for the event. With its help I was trying to sharpen the perception of Russian avant-garde as the epic power of our fiery brushes.”

“One time I brought my friends to the Tretyakov Gallery on Krymsky Val and told them everything I know about Russian avant-garde. When we were leaving the gallery, my friends cried in amazement, ‘We’re so proud of our country!’ I would like all of Russia’s inhabitants to experience that feeling.”

“An empty event on my birthday was an amazing gift! I’m still so impressed! The festive mood enhanced the emotions from what was going on, and the red hands that Katya @katia_mi came up with started to work miracles!”

“I love museums and galleries, but I don’t like crowded places. An empty Tretyakov Gallery is my ideal scenario for cultured leisure. I would like to come up with something extraordinary to always remember this unusual experience, to join in the atmosphere.”

You can find other photographs on Instagram under the hashtag #emptytretyakov.

Instagrammers capture Russia’s most famous museum without the crowds

About the #empty movement

The #empty movement was born in New York at the initiative of Instagrammer Dave Krugman (@dave.krugman), who invited several Instagrammers to a private meeting at the Metropolitan Museum of Art during its off hours. After the event, the participants uploaded their photos to Instagram with the hashtag #emptymet. The Metropolitan Museum of Art, the Statens Museum for Kunst in Copenhagen, and the Royal Opera House in London have already participated in the project.

The Russian Instagram community recently joined the #empty project. On Oct. 20, 2014, the Bolshoi Theater opened its doors to Instagrammers for the #EmptyBolshoi event. The State Hermitage Museum in St. Petersburg was the first Russian museum to take part in the #empty project (#EmptyHermitage).