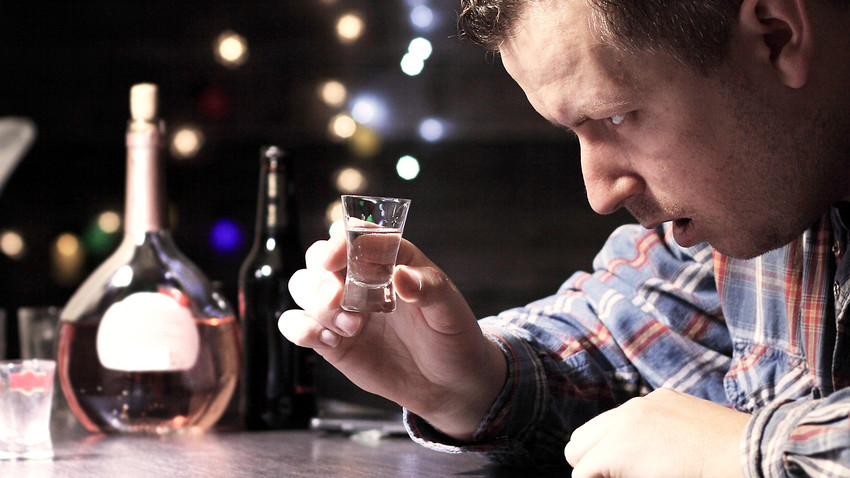 You have to drink vodka in one go and exhale through the nose rather than mouth.

Legion Media
With the New Year just around the corner, the chance of visitors to Russia not being asked to join the locals for a few celebratory drinks is extremely slim. But what steps should you take to make sure a traditional vodka session doesn’t leave your head spinning by midnight? RBTH offers useful tips on how best to prepare for a New Year’s feast and avoid its less welcome side effects.

When it comes to stereotypes about Russia, there are few more potent than the natives’ supposed attachment to drinking vodka. Foreigners often wonder: "Why do Russians love vodka so much?" However, with the New Year celebrations upon us, another question becomes more topical: "How should you drink vodka with Russians?"

Some attribute Russians' supposed extraordinary ability to drink a lot of vodka to genetics. However, Russians themselves say that this ability has nothing to do with biology and is in fact rooted in Russian traditions.

Russian businessman Artyom Minayev often invites foreigners to Moscow restaurants to discuss business and has concluded that foreigners do not know how to drink vodka.

"The biggest problem with Europeans, Americans and the Chinese is that they drink and do not take any food immediately after. So after a second or third shot it is no longer possible to talk to them about work!” says Minayev. “Russians love vodka because it really does warm you up and because it goes so well with Russian cuisine.

“When you drink vodka, you should do it with some fatty foods, even if it’s just sour cream! You can have boiled or fried potatoes with it, bread, sausage, cheese, oily fish. There are numerous snacks that are not at all expensive and that will prevent you from getting drunk."

There are other secrets too

Many Russians, before sitting down to their New Year feast, consume a raw egg. They say it is the best way of making sure that one will last the whole evening and leave the table sober. However, doctors are categorically opposed to this method because raw eggs are the easiest way of contracting salmonella. If you have concerns on that score too, you can just drink a tablespoonful of sunflower oil.

On his first visit to Moscow, Santiago Fonseca from Mexico.made some thorough preparations for the New Year party he was going to have with his girlfriend's friends, fearing that otherwise he would not be able to make it through the night. “I had read that fat prevents alcohol absorption,” he says, “so I drank several spoons of oil and ate two potatoes. It is hard to believe it but I remained sober even having drunk a whole bottle of rather dubious vodka!"

Having said that, despite the fact that fat helps you to stay sober, it is also very important not to overeat and not to eat too many starchy and sweet foods as they generate more work for the liver and pancreas, making it more difficult for them to process alcohol.

Vodka etiquette and how to avoid a hangover

Anastasia Knezhevich sells numerous varieties of vodka at her shop and has to spend a lot of time explaining to foreigners how vodka is consumed in Siberia, where she is originally from.

"I think the problem with foreigners is that they mix vodka in cocktails and sip vodka slowly,” says Knezhevich. “I keep telling them that you have to drink vodka in one go and exhale through the nose rather than mouth. That’s why Russians are capable of drinking a lot of vodka and remaining alive afterwards.”

According to Artyom Minayev, at a Russian dinner party it is important for a foreigner to show that he or she is a friendly person. To that end, it is necessary to drink the first two or three shots, after which it is possible to take a break to save energy for more to come.

"When a foreigner is ready to have another shot of vodka, they need to take the bottle and fill the glasses of all those present. I was at one dinner once where a Japanese guest kept pouring vodka only into his own glass. It was so tactless that nobody wanted to invite him ever again. Incidentally, he never managed to sign the important contracts that he had come to Moscow to sign," recalls Minayev.

If none of the recommendations above proves useful in your case, here is another piece of advice from RBTH: First thing the next morning, drink a glass of salty water or brine. This is the most effective ancient remedy against hangovers and headaches, and many Russians swear by it.