Choosing the past over the present: The enduring popularity of Soviet films 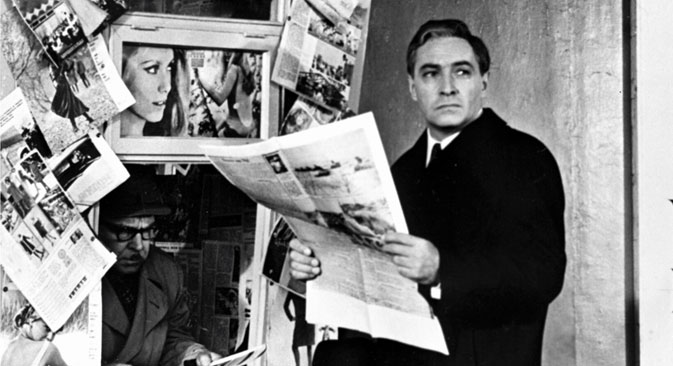 Despite all the new films being released, Russian audiences still appear to prefer watching old favorites over and over again. Now many directors are creating remakes of old Soviet classics, and sometimes even updating them for more contemporary viewers. What is behind Russia’s nostalgia for old Soviet films?

The highest-rated series on Russian TV today are about Soviet times. Take The Case of Gastronom No.1, for instance, the story of the director of the Yeliseyevsky food store on Moscow’s Gor'kogo Street (now Tverskaya Street). Then there is Furtseva - about the Soviet Minister of Culture, and Galina - about the daughter of Leonid Brezhnev, the General Secretary of the USSR, as well as Marshall Zhukov - about the most important Soviet military commander. And many more new series about the Soviet era are on the way.

Feature-length films have not been forgotten either. Old movies, such as Love and Pigeons, Moscow Does Not Believe in Tears, The Irony of Fate, or Enjoy Your Bath!, which are traditionally shown on TV on New Year's Eve, continue to gather big audiences whenever they are screened.

What's the trick? Was Soviet cinema that energetically-charged? Or is it because it was made by superprofessionals? It's widely believed in Russia that Soviet-era films were every bit as good as Hollywood ones. Russian film director Alexander Mitta, known for Soviet film hits Air Crew and Shine, Shine, explains this phenomena:

“People seek a foothold in the past. The past looks good in films. And that's positive, but people should at least respect their past,” says Mitta. “There were repulsive things in the Soviet past, such as Stalin's Terror. But if you come to think of the Brezhnev period of stagnation, many people enjoyed it. Businesses worked, basic food was always available, a small salary was guaranteed.

“Some shiver at the very reminiscence of that period because of its lack of freedoms. But the majority of people care less about freedoms and more about a normal stable life — creating a family, raising children...This is the past that cinema shows. This is why it's so attractive today.”

Film producers are now ruthlessly exploiting the interest in Soviet films for their benefit. Several years ago emerged an obsession to colorize old black-and-white Soviet films and series. Colorization technology is relatively expensive and laborious. But in this case neither money nor the efforts were a problem as the initiative came from the TV channels, ie. the most powerful and rich clients. The colorized films include Spring on Zarechnaya Street, Three Poplars at Plyushchikha, Jolly Fellows, Cinderella, the TV miniseries Seventeen Moments of Spring and others. Curiously, audiences still prefer the black-and-white original.

Remakes and sequels represent another way to exploit the zest for Soviet cinema. Basically, it refers to comedies such as Office Romance - the story of a love affair between a general manager with a failed personal life nicknamed “Frump” and her subordinate - a single father of two children.

Another one is Gentlemen of Fortune - the story of a kindergarten teacher who happens to bear a striking similarility to a notorious criminal who is trying to track down a priceless archeological find together with his accomplices. A sequel of the film The Irony of Fate, or Enjoy Your Bath! was even made, with the aim of screening it on New Year’s Eve to a younger, more modern audience.

Among other new releases was the new version of Jolly Fellows - a musical comedy originally starring Soviet film icons Lyubov Orlova and Grigori Alexandrov. However, according to these same producers, the 2014 version of Jolly Fellows was not a big success, so the film received a limited release. The new film has no chance of winning the nationwide adulation that the Soviet film did.

Another trend is to buy the rights of a Soviet film or to the work that underlies it, and to shoot a new movie. This is what happened with Soviet playwright Alexander Volodin’s Don't Part with Your Loved Ones, which was reinterpreted by director Oksana Bychkova in her film Another Year, who populated it with contemporary young characters in a modern office setting. The only thing that remained from Volodin's play was the general plot.

Bringing back the past

The rights of the majority of Soviet films are stored in the State Film Fund of the Russian Federation and a bigger influx of Soviet film remakes can be expected in the near future.

“Making new movies based on old scripts and staging new performances based on old plays is definitely a good thing to do,” Vasiliy Shilnikov, Deputy Director of Copyright and Related Rights of the State Film Fund, told RBTH. “Given that younger viewers do not accept either black-and-white color or the analog sounds of old cinema, the remakes are necessary - to enable today's audience to discover eternal values​​.

Shilnikov points out that the 1960s and 1970s brought an incredible number of masterpieces into the world, and says that while here is no need to improve their content, attempting to modernize the form using new technologies may be worthwhile.

“However,” he adds, “directors who decide to remake classic works should be aware that there is little chance of standing up to the original. The bar is set too high.”

Read more: How to ring in the New Year like a Russian>>>