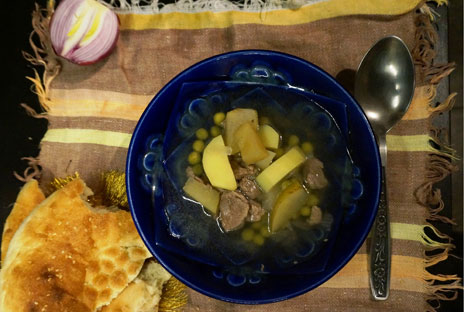 This traditional lamb-based soup improves with the quality of the ingredients, but no matter what you have to make it with, it’s a good solution to what to eat while recovering from New Year celebrations.

There are a lot of Soviet meals I’ve eaten but have never cooked, and there are a few Soviet meals I know well and have prepared, but this time I’m up against a meal I’ve not only never made or tried –I’ve barely even heard of it.

It’s Azerbaijani bouzbash: lamb soup with apples, peas, potatoes and tomato sauce. Part of me wonders if perhaps there’s a good reason why I haven’t crossed paths with this Soviet delight. But another part of me has a lot of faith in the cuisine of the Caucasus, which is generally spicy and exciting. And, if the soup doesn’t turn out to be edible, I have a pizza I can pull out of the freezer. Although, as the cost of frozen pizza, like that of all imported foods, has gone up in recent months due to the falling value of the ruble and the food sanctions, I was holding on to that pizza for its possible resale value.

Luckily, the bouzbash turned out fine – not delicious, but edible – so I got to keep my pizza investment.

Delicious TV: Uzbek Pilaf, make a lot or none at all

The problem with all lamb-based meals is that we don’t really have decent lamb in Moscow. Well, we do, but only at some markets, which aren’t convenient for me.

As for the other ingredients, they are easily available, except for uncooked peas. I was excited about going old school and boiling the peas, but was hit by reality: you can’t find uncooked peas anymore – they just come in cans.

It was a very different situation in the days when my grandmother was young: “During World War II, we kids would heat up the peas on a hot frying pan on an oven so they would get easier to chew. We would carry them around in our pockets and snack on them as if they were sunflower seeds or nuts. This was on top of lots of peas we were getting in soups and porridges, too. We had peas during the war, and nothing else,” my grandmother said.

My grandmother’s friend also remembered that her mother knew a pre-Revolutionary recipe for pea kissel (a kind of drink) served with hemp oil. They also made rye pirogi with a filling of onions and peas.

As for lamb, in those days, you could find it at the kind of markets we would call a farmer’s market today. My grandmother called them “an island of capitalism, where you could find almost anything and haggle over the price. You could also buy as much as you wanted, unlike in shops where there could be a ‘1 unit per person’ limit, like in the 1960s and 1970s, when food was in short supply.”

I’m glad I discovered this lamb meal, and, although we don’t have huge amount of lamb to choose from, it will certainly go over well on a cold winter night, especially when everyone’s recovering from the New Year celebrations.

The recipe from the Soviet Cook Book, page 99. Click to enlarge the image

Cut or chop up the washed lamb into 30-40-gram pieces. Place them into a pot, fill it with water so that the water covers the lamb, salt it and cover the pot with a lid. Simmer on a low heat, removing the froth.

For 500 grams of lamb - one cup of split peas, 500 grams of potatoes, two apples, two onions, two tablespoons of tomato puree and butter.

In a separate pot, boil the washed and sorted out peas in 2-3 cups of cold water and simmer on a low heat. After about 1-1.5 hours place the boiled pieces of lamb into the pot with the peas, removing the small bones.

Afterwards, add the strained broth, the finely chopped and fried onion, the sliced potatoes and apples, the tomato puree, salt, pepper and, covering the pot with a lid, stew for 20-25 minutes.