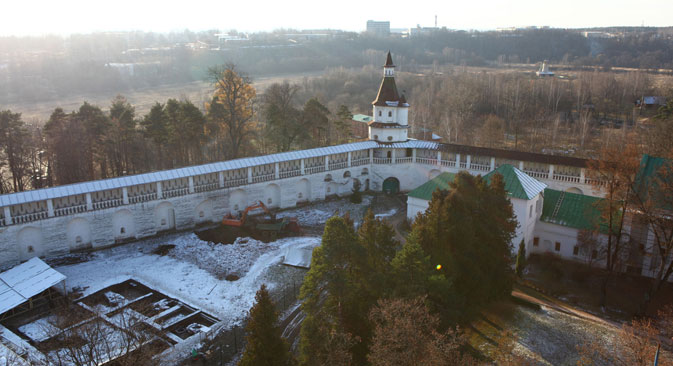 The monastery of New Jerusalem, near Moscow, was conceived as the Orthodox world’s equivalent to the Holy Land. The monastery survived several stormy periods in Russian history, was closed by the Soviet government and later destroyed by Nazi forces. RBTH found out how the renowned religious complex is being renovated.

From Moscow, the pilgrimage to Jerusalem is not far – just 25 miles, in fact.

Just northwest of the city lies one of Russia’s historically most significant Orthodox shrines, the 17th-century monastic complex of New Jerusalem. Abandoned for decades during Soviet rule, the monastery is now being restored and visitors are returning.

In November 2014, the monastery saw the opening of the largest museum complex in Moscow's environs, the New Jerusalem Museum, containing 100,000 exhibits in total, including masterpieces of religious art and some of the oldest examples of Russian portrait painting. However, besides the museum, visitors should also see New Jerusalem itself - the monastery that represents four centuries of Russian history.

A new center for the Orthodox world

Many countries had sought to be recognized as the heirs to the legacy of the Holy Roman Empire and its Byzantine successor, especially following the capture of Constantinople by the Turks in 1453. The idea of Moscow being analogous to Rome was first expressed during the rule of Ivan III, in the late 15th century. From that time onward, many Russian rulers, priests and philosophers spoke about Moscow as the Rome of the Orthodox world, emphasizing Russia's special, messianic role.

The construction of New Jerusalem was first planned by Patriarch Nikon in 1656. Back then Moscow was considered the center of the Orthodox world, the Third Rome, and the New Jerusalem monastery was supposed to support its claim to this title.

Nikon did everything possible so that the new center of the Orthodox world would have its own Holy Land. Thus, all the villages and hills neighboring New Jerusalem received biblical names, and the Istra River was renamed Jordan. The monastery's principal cathedral was supposed to be built along the patterns of the Church of the Holy Sepulcher in Jerusalem. A monk was therefore sent to Palestine to measure and sketch the shrine.

However, in 1658, just two years after beginning the construction of the monastery, Nikon quarreled with Tsar Alexei Mikhailovich and went into self-imposed exile to New Jerusalem. Construction restarted in 1678 and continued during the reign of the new tsar, Fyodor Alexeyevich. By this time Nikon had been deprived of his sacerdotal functions. 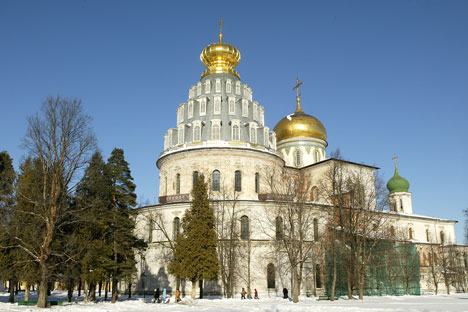 The New Jerusalem monastery was built in the Moscow Baroque style. Some of Russia's leading architects of the time participated in its construction in one period or another: Bukhvostov, Rastrelli, Kazakov, Ton. The Cathedral of the Resurrection, which became the heart of the monastery, was built according to the sketches of the Church of the Holy Sepulcher in Jerusalem, which pilgrims had brought from Palestine. The architectural ensemble is enclosed by a fortified wall that was built by Yakov Bukhvostov at the end of the 17th century.

However, Russia’s ideological shift westward in the 1700s brought great changes to the social position of the church in Russia. Even though New Jerusalem remained the most important Orthodox shrine, its subsequent construction and development came to a halt with the arrival of the new era. The next Russian monarch, Peter I (the Great), concentrated on developing the sciences and considered religious ideas secondary.

Yet Peter the Great's reforms did not stop the monastery from becoming one of the most cherished sites for Orthodox believers for the next two centuries. Some believed that the monastery had indeed become the center of the Orthodox world, while others were simply fascinated by its beauty and power.

The monastery in the 20th century - devastation, German bombs, restoration

When the Bolsheviks came to power in the early 20th century, New Jerusalem found itself in a quandary. On the one hand, the new government, with its atheist ideology, did not encourage religious services, but on the other, it made efforts to preserve the monastery's cultural legacy. In the 1920s a State Artistic-Historical Museum was set up at New Jerusalem, housing items from the churches and the monastery as well as paintings and icons.

The issue of religious service was more complicated. Hundreds of pilgrims would come to pray at the monastery even under the new Soviet regime. Obviously, this did not please the communist leaders. The monastery's relics - impeccable replicas of Palestine relics - were seized by the government and taken to various museums.

In 1941 Nazi sappers blew up New Jerusalem, leaving the Church of the Resurrection and most of the other structures in ruins. But the monastery was so highly valued that reconstruction began immediately after its recapture by the Red Army, in 1942.

Despite state policy, the pilgrims did not stop coming. Even after all the religious services at New Jerusalem had been curtailed, people would come to see the stone tablet that, according to legend, had been brought from Jerusalem. The tablet disappeared in 1961, and only then was New Jerusalem completely abandoned.

The new museum and the end of the restoration

Today it seems that New Jerusalem has never been static or finished: Something is always being built or restored here. In 2014 a belfry and bells destroyed during the Soviet period were restored. The restorers intend to complete the renovation of the entire complex by 2016, bringing the unlikely resurrection of the monastery to completion.

"Our museum, like a phoenix, was reborn after the war," Deputy Culture Minister Yelena Kutsenko said, speaking in the presence of Prime Minister Dmitry Medvedev during the museum's inauguration.

Directions: New Jerusalem is located close to the city of Istra, near Moscow. You can take a train from the Kursky Railway Station in Moscow and get off at the Novoierusalimskaya stop.

View the gallery: Abandoned monasteries and gloomy caves of the Russian North