Ludmila Ulitskaya: Culture is above politics and public life 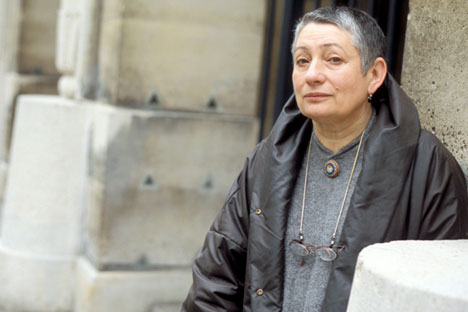 A winner of the Russian Booker and Big Book awards, an officer of the Légion d'Honneur and simply an interesting author, Ludmila Ulitskaya talks to RBTH about her popularity in and outside Russia.

Russia Beyond the Headlines: You are one of the most read Russian authors abroad: why do you think that is?

Ludmila Ulitskaya: Strictly speaking, this is a question for marketing experts rather than an author: they are the ones who analyze trends and promote products on the market. As an author I’m not particularly interested in that. Sure, my books are read both in Russia and abroad. But no one has explained to me why my books are very popular in Hungary but not in Holland, or why they have a large print run in Germany and France and a small one in the United States and Spain.

People all over the world are the same: they love, hate, make mistakes, discoveries and sacrifices, perform feats and commit crimes. And no one knows why very bad books sometimes gain a wide readership, while some very good books go unnoticed. I do not know what to make of the relative popularity of my books abroad. Perhaps they are good? Or, on the contrary, bad? Incidentally, the most published author in the world is [Paolo] Coelho. Personally I would not call him a good author: he is below average.

RBTH: How do you account for your books’ popularity in Germany? They are translated into German almost immediately after being published in Russia

L.U.: Once again this is a question for the marketing experts. However, the Literaturnaya Gazeta newspaper recently worte – as someone who reads it told me – that my success in the West can be attributed to my close links to the Institute of Translation. I found that rather amusing. There is one theory for you: some people think it is due to my “connections.”

RBTH: In 1993 your book “Poor Relations” was published in France, and only then in Russia. Why specifically France?

L.U.: By chance. I got lucky. I gave the manuscript to a translator friend of mine to read, and she gave it to her French friend, who worked at Gallimard. She passed the manuscript to Gallimard, they read it and liked it and in 1991, I think it was, I received a contract from Gallimard by post. In 1993 “Poor Relations” was published in French. That was my first collection of stories. In 1994, it was published in Russian too, by the Slovo publishing house. It wasn’t at all successful: I bought half of the print run myself. I think I still have some of those copies somewhere at home. As for Gallimard, since then they have published 18 more of my books.

RBTH: I really liked Elena Yakovich’s documentary “Solo for Ludmila Ulitskaya.” Did you? Elena also has also made films with and about Brodsky, Grossman and Aksenov. How do you feel about being in such company? Do you view modern literature – including yourself – as the successor to “great Russian literature,” or maybe Soviet literature?

L.U.: The word “company” is key here. Elena Yakovich lives next door to me: we drop by each other’s place for a cup of coffee or to borrow some salt. Her close proximity is why I had the honor of ending up in such exceptional company. I view myself as the successor to my grandfather, Yakov Ulitsky, a literary figure, music scholar and intellectual who lost his life in Stalin’s camps. I have no other claims.

RBTH: Do you consider yourself a European or Russian author?

L.U.: Russian. Although not everybody is happy with that.

RBTH: I can’t avoid asking you about politics as well. Do you separate politics, public life and literary life?

L.U.: Is there anybody in the world who does not separate these three different spheres of life? The hierarchy is obvious: culture in all its manifestations is above everything; below it is public life, with politics, which claims to run the world, at the very bottom. Alexander I lived in the time of Alexander Pushkin, not the other way round; no one remembers “whether Dante was a Guelph or a Ghibelline” or who the Pope was at the time when Leonardo da Vinci was undertaking papal commissions. Politicians highly overestimate their role, but they can do a lot to make other people’s lives worse.

RBTH: What do you think is happening to freedom of speech in Russia? Does it exist in any form?

L.U.: In Soviet times, the situation with freedom of speech was much worse. In literature, there is practically no censorship at all now. Another type of censorship rules these days: commercial censorship. But that’s still better. However, today there is so much “information noise” that a free word is barely audible. But those who want to hear it can do so. For the time being. The current trend does not fill me with optimism, but you should remember that border guards no longer go through our luggage in search of “banned books.” That’s a good thing.

RBTH: Of course, all our foreign readers have been following the Mikhail Khodorkovsky case. Your conversations and correspondence with him were published. Do you believe that his release from prison is a step forward for Russia? Khodorkovsky recently announced that he is prepared to become president if necessary. Would you support him if he ran for president?

L.U.: I am very glad that Khodorkovsky has been released. It would be great if a couple of hundred more people whose crimes have not been proven were released too. It hasn’t occurred to me to view Khodorkovsky’s release as a step forward or backward. His trial was phantasmagoric from beginning to end. It will be – and already is – the subject of very interesting books. I think that in a situation where everything has been decided in advance, a discussion about a future president is pointless.

RBTH: What projects is the Ludmila Ulitskaya Foundation working on now?

L.U.: The work of the foundation has been halted for several reasons – the main one being that I personally have run out of money. The second biggest reason is that it is necessary to do a lot of paperwork and reports for the tax and other authorities, and employing somebody to do all this work is more expensive than maintaining the foundation. So it becomes absurd.

RBTH: You attended the Ukraine-Russia Dialog forum in Kiev in April this year. How and when do you think this conflict will be resolved? Are you doing anything specific in the public and cultural spheres to contribute to its resolution?

L.U.: It is a stalemate. And it will last for a long time. Both sides have done a lot to make this process irreversible. I have not seen any bloody confrontation in the cultural sphere: it is possible to maintain a dialog with writers, artists, musicians and other culture figures, and it is sensible and fruitful. There is, however, a catastrophe unfolding at the level of propaganda: an escalation of hatred, mutual complaints, suspicion and distrust. There appears to be a community of people who are very eager to fight a war. We are trying to build the bridges that our authorities are so good at destroying. There are several joint literary projects that we are trying to carry out. But it is all very difficult; we have to overcome a lot of resistance. Neither the Ukrainian nor the Russian government is interested in these cultural bridges, which is very sad. It will take a lot of time to mend this huge hole. More than one generation, I fear.