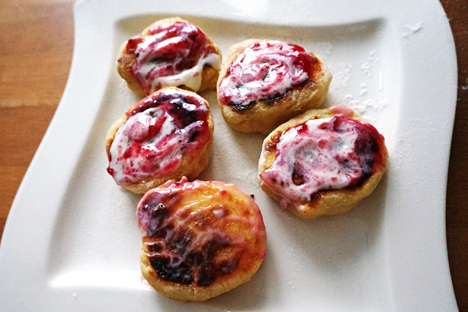 These pancakes made from cheese curds are a favorite breakfast for many Russians, but surprisingly tricky to make.

This breakfast is dedicated to tvorog – a type of cottage cheese or curd, which is very widely used in Russia. It is eaten for breakfast, used in desserts and stuffed into dumplings and pies.

Tvorog attracts a lot of respect in Russia. Being able to intelligently discuss the best ways of eating it, how to choose the best type and knowing how to prepare it will all get you a raise of eyebrows and an approving nod of the head. Which is why I’m surprised that one of the most popular breakfast options made with tvorog is known as “syrniki” – literally, cheese things – as opposed to “tvorozhniki” – cottage-cheese things. I was pleased to find out that the Book calls them “tvorozhniki,” although it obviously didn’t catch on among the wider public.

Usually considered too good a product to be used in cooking, tvorog is often eaten by itself with sour cream and jam, so I suspect syrniki might have been invented as a means to use up tvorog that was already too old to be consumed uncooked. Nothing – let alone food – gets thrown out much in Russia. This cultural tendency definitely comes from the older generation who had to hold on to everything they had, whether it was old dairy products or candy wrappers.

Granny tells me that there was an joke in Soviet times referring to the “throwing out” of food – the verb used for “to throw out” and “to deliver to the shop in limited quantities to sell” was the same – vykinut’. In the joke, a foreigner and a Russian are standing by a store, and the Russian says: “look, they delivered some food!” to which the foreigner replies: “Yes, we throw out food that way, too.”

It seems like there was plenty of irony and general understanding that the way things were in the Soviet Union was far from perfect. For instance, all packaged foods had to have an official sticker known as a GOST sticker, which indicated that the food was made according to state standards. And the very best of each type of food would get an additional label shaped like a hexagon saying “znak kachestva” (assurance of quality). Factories would compete for this label, and considered it a big deal to have one of those on their cheese, tvorog, chocolate or tea.

The people, however, seemed far less excited about it. Among the general public, “znak kachestva” sarcastically became known as “we couldn’t do better if we tried.” I asked granny if she would choose tvorog or other foods based on the hexagon label. She said she never did – she just bought whatever was available and affordable. If there was more than one type, then she’d choose by the region it came from. “Like now I choose dairy from New Zealand or France,” said said, before remembering about the ban on the import of many foreign foods now in place in Russia “...well, I did, when it was still there. Now I go for Belarusian products.”

I think I chose the wrong type of tvorog for my syrniki, as they turned out rubbery. The challenge now is to resist the temptation to throw them out and maybe find a way to re-cook them (something my grandmother would do), and not to blame my poor choice on the absence of a hexagon.

Put the cottage cheese through a meat grinder or rub through a sieve. Add to a deep dish or pan. Put in ¼ cup sifted flour, sugar, salt, vanilla and egg. Mix well.

Put on a floured table and roll the mixture into a thick log.

Cut it crosswise into 10 equal-size cakes. Roll each cake in the remaining flour. Put into a heated pan coated with butter and fry on both sides until golden brown.