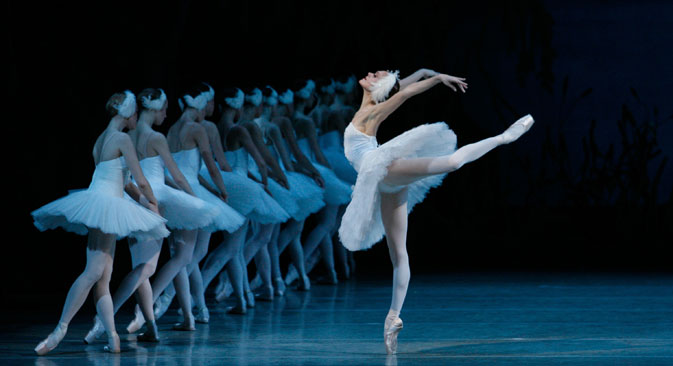 The St. Petersburg-based company will perform in 12 cities during January and February.

The renowned Mariinsky Theater begins a month-long U.S. tour on Jan. 14, with a performance of Swan Lake in New York on Jan. 15. After a series of performances at the Brooklyn Academy of Music, accompanied by the theater’s symphony orchestra under the direction of maestro Valery Gergiev, the troupe will move to Washington, DC on Jan. 27. Performances will also be held in 10 other U.S. cities.

Some of the ballet stars participating in the tour include Ulyana Lopatkina, Ekaterina Kondaurova, Vladimir Shklyarov and Timur Askerov.

Sergei Prokofiev’s ballet Cinderella, staged by Alexei Ratmansky, will be performed three times. Diana Vishneva and Konstantin Zverev will play the main roles of Cinderella and the Prince (Jan. 17), respectively.

“The Mariinsky Theater will be performing ballet at the Brooklyn Academy of Music for the first time,” the Mariinsky ballet troupe’s acting director Yury Fateev told RIA Novosti. “The program, which the host and the theater compiled together, includes traditional classics and works of modern choreography.”

“Two gala evenings entitled ‘Chopin: Dances for Piano’ will feature performances of Michel Fokine’s one-act ballet Chopiniana, Jerome Robbins’ one-act ballet In the Night, and Benjamin Millepied’s one-act ballet Without, which were created to the music of the great Polish composer,” Fateev said.

According to him, the upcoming performance of Millepied’s ballet has generated special interest. “Benjamin himself is flying from Paris to New York to personally rehearse with our dancers throughout the week,” Fateev said. Millepied is well known to American ballet fans as the star and choreographer of the film Black Swan. He is currently the director of the Paris Opera Ballet.

“After performing in New York, we will move to the Kennedy Center in Washington, where we will perform a special program that was selected by the host. It includes the following one-act ballets: The Rite of Spring by Vaslav Nijinsky, Le Spectre de la Rose and The Dying Swan by Michel Fokine, as well as a grand pas from the ballet Paquita. We will perform throughout the week of Jan. 27 at the Kennedy Center, where our ballet tours every season,” Fateev said.

He added that the Mariinsky Ballet already has regular fans who fly to Washington from other cities just to see its shows, and that the popularity of the group has not been affected by the current difficult geopolitical relations between Russia and the U.S.

“With respect to the sanctions, we had no difficulties organizing the tour. The only changes that were made to the program involved increasing the number of shows. Whereas we had previously planned two Cinderellas, we are now showing three, and instead of one gala evening we are having two. Seeing as people snapped up tickets, the Americans decided to increase the number of performances. And how can you prohibit people from enjoying art, anyway? I was told that people come and ask for a ticket to the show where Russians dance,” Fateev said.

The Mariinsky symphony orchestra will also be part of the tour, performing its own program as of Jan. 24. The symphony concerts will includes work by Russian composers Peter Tchaikovsky, Dmitry Shostakovich, Sergei Prokofiev and Sergei Rachmaninoff. Pianists Denis Matsuev and Bekhzod Abduraimov and conductor Ignat Solzhenitsyn are participating in the performances.

Gergiev will conduct the opera Iolanta and Bluebeard’s Castle staged by the Metropolitan Opera six times starting on Jan. 26. Soprano Anna Netrebko will play the role of Iolanta.

Thanks to the program Met Live in HD, audiences around the U.S. will be able to watch Gergiev’s final performance at movie theaters on Feb. 14.

This article was based on reporting by RIA Novosti.

Read more: Opera diva Anna Netrebko: The part of Lady Macbeth fit me like a glove>>>