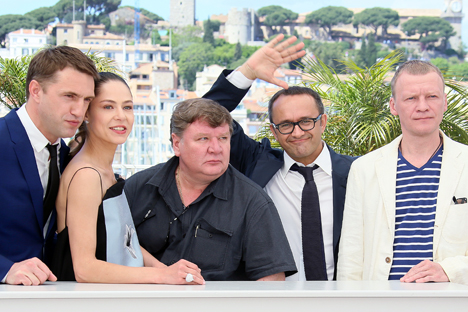 Andrei Zvyagnitsev’s film has already taken home a Golden Globe and Palme d’Or at Cannes for best foreign film and it is now up for an Oscar. Still wonder if you should see it? Let RIR erase any remaining doubts.

1. This is not only the best Russian film of the year, but of the past several years. Its Golden Globe for best foreign film is Russia’s first in nearly half a century – the last Golden Globe awarded to a Russian film went to Sergei Bondarchuk’s War and Peace in 1969. More significantly, Leviathan is the first Russian film that is not a costume drama to receive so much international recognition. The American film academies have never before seen this kind of harsh original drama about Russian provincial life on the big screen.

Zvyagintsev is one of contemporary Russia’s top directors. His debut, The Return (2003) won two Golden Lions in Venice and his film The Banishment (2007), which was filmed in Europe with Russian and Swedish actors received the award for its leading man, Konstantin Lavronenko, at Cannes. His Elena (2011) won a Special Jury Prize at Cannes. Leviathan is probably his best, most complex, and most uncompromising film.

2. The movie fulfills audiences’ expectations about Russian film, but also defies them. Leviathan is a lingering, melancholy, slow-moving drama about the hopeless lives of people in rural Russia. The landscape is harsh and picturesque, which is what has been expected of Zvyagintsev since The Banishment, which also takes place in the countryside.

The protagonists’ fates are complicated and tragic. Every frame is shot at an artistic level, not just from the perspective of cinematography, but also in terms of creating a metaphor or symbol. The leviathan is a Biblical image, a kind of sea creature, and this is referenced throughout the film.

Andrey Zvyagintsev: Conflict of the man and the system is a universal story

The viewer catches glimpses of the skeleton of some sea creature on the shore of the White Sea, of a tail emerging from the churning waters. A priest also approaches the protagonist and tells him a short parable about the character Job from the Bible, the story on which Leviathan is based.

3. Leviathan is the most relevant and bitingly critical movie filmed in Russia in a long time. The plot centers on the conflict between two forces: on the one hand, a simple mechanic and his few allies, and on the other hand, the government machine, the leviathan of the title. The town mayor has encroached on the protagonist’s home and land and is ready to seize them at any price.

However, Zvyagintsev’s film does not just deliver a verdict against the system – it also offers a serious analysis of its roots. Instead of corruption and the deep connection among all the branches of power, the problem lies in the blessing imparted on terrible dealings by the key moral authority – the Russian Orthodox Church.

4. At the same time, the enormous number of the film’s supporters, beginning with New Zealand director Jane Campion, who headed the Cannes jury that gave an award to the film, appreciate it not for the portrait it paints of Putin’s Russia, but on the contrary, for its universal language.

Even for a person not interested in Russian politics, Leviathan is a powerful drama, even a tragedy in the classical spirit, in which catharsis is reached only through pain and compassion. And Zvyagintsev’s humor, his lyricism, and his epic view on man’s place in nature and the universe are evident to viewers in any country.

For American audiences, it’s also interesting to note that the film is based on the story of American welder Marvin Heemeyer. After authorities tried to take away his house and land, so soldered himself into a bulldozer and demolished half of his town. He committed suicide immediately after the rampage. The soundtrack also has American roots – it is taken from Philip Glass’s opera Akhnaten.

5. Zvyagintsev’s film is timeless and tied to a long tradition of classic Russian literature, including Pushkin’s The Stationmaster, Dostoevsky’s Poor Folk, Leskov’s Lady Macbeth of the Mtsensk District, and a whole layer of Chekhov’s later prose. All of them are reflected in Leviathan, directly or indirectly. This intimate story of one family is at the same time a history of modern civilization, both Russian and beyond.