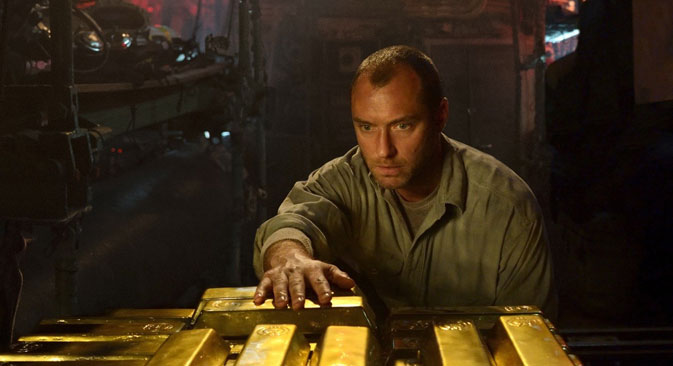 Jude Law plays a submarine specialist who is fired from his job because his company no longer needs his services. Source: Kinopoisk.ru

Scottish filmmaker Kevin MacDonald revels in being a bit different: his documentary films appear to be fiction, his fiction films seem like documentaries. He can make films that are recognized by Hollywood, but he has repeatedly refused to play according to Hollywood rules. Yet, that hasn’t hampered his success: he won an Oscar in 1999 for his documentary One Day in September, which examines the murder of 11 Israeli athletes at the 1972 Munich Summer Olympics.

The only thing that MacDonald's films all have in common, including his 2012 documentary Marley about the famous Jamaican reggae singer, is his interest in politics. The Last King of Scotland (2006) detailed the story of Ugandan dictator Idi Amin (played by Forest Whitaker in an Oscar-winning role), while in the thriller State of Play (2009) the protagonist, a journalist played by Russell Crowe, immerses himself into the world of political intrigues in Washington. In 2014 MacDonald decided to explore a new genre: the deep-sea thriller.

In an interview MacDonald acknowledged hearing of the 2000 Kursk submarine tragedy, yet this film about searching for gold in the Black Sea has only an explosion in common with that unfortunate event. Otherwise, there are no similarities. His is a story of human despair, which starts long before the vessel’s submersion below ground.

The plot centers on Captain Robinson (Jude Law), a submarine specialist who is fired from his job because his company no longer needs his services. He has no money, work or prospects, and his family is also being torn apart. Unsurprisingly, he accepts the first opportunity he gets: to travel on an old Soviet submarine in search for another vessel that sank with gold on board.

Robinson departs from Sevastopol with a team of Englishmen and Russians in search of the sunken treasure. As rules of the genre frequently dictate, a tight space leads to conflict. This, of course, makes sense: the less claimants to the treasure, the more that will be left over for the living.

And here MacDonald violates an old western cinematographic tradition of showing Russians as - in the best case - victims of the Soviet regime or, in the worst case, criminals with prison tattoos, a tradition that has scarcely changed since 1991. On the contrary, if we recall recent Hollywood films - Jack Ryan, The Equalizer, John Wick - it seems that Russian characters have become even more stereotypical compared to the years following perestroika.

In Black Sea Russians are seen as being no worse than the English, who, by the way, are to the ones that start the mess. What’s more, MacDonald clearly shows the subtle differences between generations, so crucial for understanding Russian society: Konstantin Khabensky's character nicknamed Blacky is over 40, whereas Grigory Dobrygin plays a young cartographer named Morozov. While Blacky still has the manners of a Soviet seaman, Morozov is a man of the world who ultimately becomes one of the film’s heroes.

MacDonald says that Dobrygin's methods are unique for a Russian actor, who is usually reared in a Russian-Soviet theatrical tradition. His approach is more similar to an American style, which is also based on the Russian theater, but without the Soviet heritage and more oriented towards New York.

The young Al Pacino and Robert De Niro used an interpretation of Russian theater director Konstantin Stanislavsky’s method, in which actors live the life of their characters not only on the set, but also between shoots. As an example, Dobrygin refused to live with the other actors in a hotel, convinced that such conditions were too posh for his character. Instead he spent his nights in a cheap hostel

If MacDonald wanted to comment on the current situation in Crimea, then most likely the thought appeared beforehand: Black Sea was conceived well before the events in Crimea split Russia and the West. But even if the idea was born unwittingly, it was still very apropos.

In Black Sea we can see the constrained co-existence of two worlds in one claustrophobic submarine, which explodes due to a mistake by one of the crewmembers. And the fact that the only "bad guys" in the film are representatives of a western corporation gives MacDonald's stance on the conflict between the two worlds credit. And perhaps not only in the film.