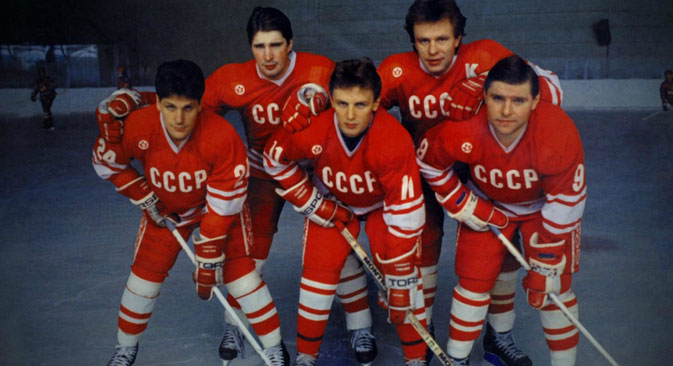 Film details site where Cold War’s greatest battle was fought: on the ice.

The documentary Red Army, which tells the story of the legendary Soviet hockey team of the 1980s, debuted on American movie screens on Jan. 23. Sony Pictures Classics hosted a press conference for the documentary by American director Gabe Polsky at its New York office on Jan. 20.

“I was motivated to create Red Army mostly because a lot of people in the United States know about Soviet hockey exclusively through the 1981 film Miracle on Ice,” Polsky told TASS. “It talks about the Americans’ unexpected victory in the 1980 Winter Olympics over the USSR team, which was the best in the world at that time. Soviet players achieved a real revolution in hockey, and few people know about that in the U.S.”

The protagonist in Red Army is one of the best defenders in the history of Soviet hockey: Viacheslav Fetisov. Polsky talked about how difficult it was for the Soviet team to earn its many medals.

“I tried to use hockey and Fetisov’s career as a window through which viewers can look at the Soviet Union and understand what life was like there,” Polsky said. “The team’s story is essentially the story of the USSR. It represents the rise and fall of the Soviet empire. The film also shows how athletic standoffs almost always were politicized during the Cold War period.

In an interview with National Public Radio (NPR) in the U.S. Polsky further elaborated on Fetisov’s importance for Russia. “Russia was a country that needed heroes,” said Polsky. “I think they suffer from a lack of people for young people to look up to…I think Fetisov felt a sense of responsibility for his country, his people, and he considers Russia his home. I think he wants to help make the country as good as it can be.”

Polsky himself was very fond of hockey as a young man and one of his coaches was from the Soviet Union. “That person changed my attitude towards not only hockey, but life in general,” the director said. “His approach was very different from the one taken in North America. He encouraged creativity and emphasized team spirit.”

Fetisov categorically refused to participate in the project at first and only agreed to cooperate at the last minute, Polsky said. “Slava [diminutive of Viacheslav] said he would give me 15 minutes, but the interview actually ended up lasting five hours. He behaved a lot like he does on the ice – kind of rough and aggressive, but at the same time very interesting and a witty conversationalist,” the director said.

Fetisov’s narrative is supplemented with commentary by journalist Vladimir Pozner, as well as interviews with other Soviet hockey stars, such as Vladislav Tretiak, Alexei Kasatonov, and Vladimir Krutov. Krutov died just a month after filming. The Soviet team’s former coach Viktor Tikhonov declined to be interviewed for the film. Rare archive footage is used throughout the documentary.

“This picture tells the story of my country and my team. I think the film turned out interesting,” Fetisov told TASS. “Polsky managed to incorporate elements of a thriller and make a documentary film exciting. It is noteworthy that a film about successful Soviet guys and about the Soviet school, which was the best, is coming to screens during such a complicated geopolitical time.”

The film made its debut on screens in New York and Los Angeles on January 23 and will appear in dozens of major cities throughout the U.S. in February and March.

Read more: Viktor Tikhonov: The man who made the ‘Miracle on Ice’ a miracle>>>