The lard makes the cheburek 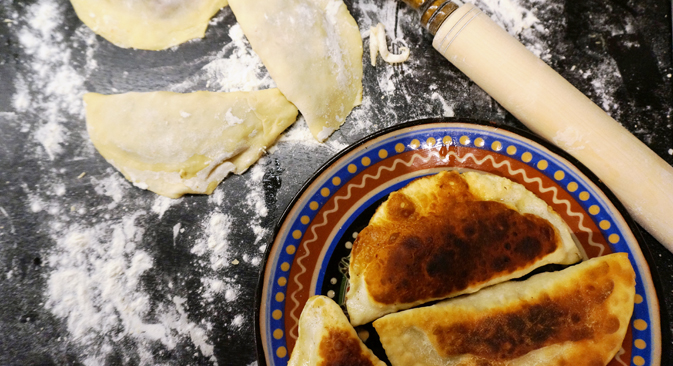 I’m a little nervous as I get ready to approach the next recipe. Chebureki (deep fried meat pastries) have a legacy of their own – there are songs about them, they appear in cartoons (at least they are often drawn as cartoon characters), and, from what I’ve heard, they are not easy to make.

My grandmother’s comment about them only made me more nervous. She said: “The best cheburek I ever had was in Bakhchisaray [a town in Crimea]. Ooooh I still remember that delicious, juicy filling and perfect pastry – crispy, yet soft. I never had anything like it ever again. They were soooo delicious.”

Needless to say, I am not letting her try my chebureki. She had enough fun with my pickled cabbage “fail;” that story will get her through a few more dinner parties.

Looking for chebureki in Moscow, you will find them mostly in cheburechnye – special shops that sell chebureki. Granny tells me that these shops used to be everywhere, like blinnye – cafes that sold only the Russian pancakes called blini, and pel’mennye – restaurants that served only dumplings. These places attract a certain crowd, and I’m pretty sure they double as a social outlet, English-pub style.

There are still cheburechnye around, although not as many as before. I remember as an 18-year-old, going out dancing all night and ending up at a cheburechnaya at 5am, surrounded by a crowd I wouldn’t want to tag on Facebook. It was a good feed though: cheap, filling and quick.

My failing in making my own chebureki started at the ingredient list. Nearby shops didn’t have any lamb, so I had to settle for beef. Culinary sin, I know. I’ll confess later.

Then of course there is the lard. You can’t find it these days. It’s something your Ukrainian friend would bring over and only share with his/her best friends. I was among the best friends once, but passed up the opportunity. I won’t eat pig fat if I can help it. Lots and lots of Soviet citizens would have disagreed with me:

“Lard was very popular, you could get it in any meat shop. It was even more popular than meat, and certainly cheaper,” my grandmother said. “It made for a good snack for drinkers. You could get Hungarian lard with red pepper and other various types of salted lard. People would put it on bread, not use as cooking oil.”

She also spoke to her friend who grew up in the countryside, and this is what Galina Vasilyevna reported:

“In the village, I practically grew up on lard. It was the main product for the peasants. Any trip away from home would require a loaf of dark bread and a slab of lard to make sandwiches. Historically I think it’s because when Tatars would come in and raid the villages, they would take all the cattle, but not the pigs, as they were Muslim. That’s how peasants got used to eating mostly lard.” She added: “mixing the ‘inside’ lard with honey, aloe and cocoa makes for a perfect remedy for pneumonia and TB.”

After I made my chebureki, which turned out very dry and very far from what I remembered eating at a cheburechnye at 5am after clubbing, I realized that they could really have used some lard to add juice and maybe double up as preventative measure from pneumonia, cold, upset stomach or tapeworms. No, wait! That remedy is vodka. It tastes better, is widely available and goes well with chebureki. That must be why all those men who hang out in the cheburechnye looked so sick – they just came in for the remedy. I hope there was enough lard in their chebureki, though. 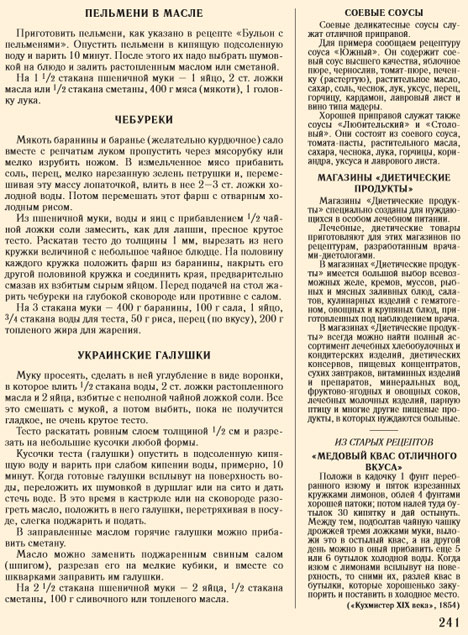 The recipe from the Soviet Cook Book, page 241. Click to enlarge the image

Combine flour, water, 1 egg and ½ tsp salt to make a dough. Roll out the dough to a thickness of 1 mm, cut out circles the size of a small saucer.

On half of each circle, put the lamb and rice mixture. Fold the circle over and press dough closed. Beat the second egg in a small bowl. Brush pastries with beaten egg. Melt 200 grams lard in a deep frying pan. Fry the pastries.