From tsarist Russia to Soviet coup: Swan Lake turns 120 at the Mariinsky 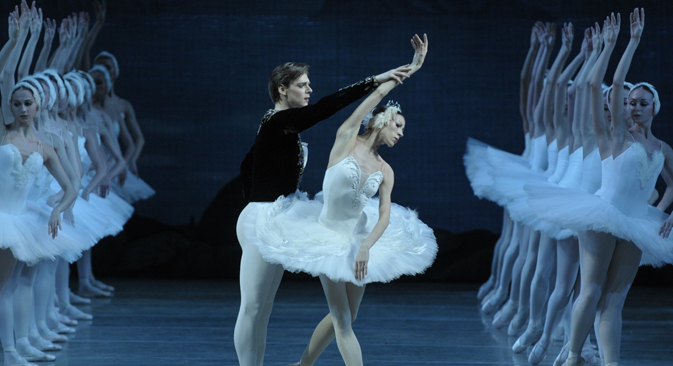 This year marks the 120th anniversary of the premiere of legendary ballet Swan Lake at the Mariinsky Theater. How did Tchaikovsky’s famous ballet end up in the St. Petersburg theater’s repertoire, how was its storyline adapted to reflect the changes of the 20th century, and what role did it play in the Soviet coup of 1991?

In January 1895, the legendary ballet Swan Lake, set to music by Pyotr Tchaikovsky, was performed on the stage of St. Petersburg’s illustrious Mariinsky Theater for the very first time. Although the version arranged by Marius Petipa and Lev Ivanov was not the first staging of Swan Lake, it was to become the interpetation that changed the whole world’s attitude towards the great composer.

Over the past 120 years, Swan Lake has become one of the most frequently staged ballets in the world. There are versions with both happy and tragic endings and featuring various protagonists. For example, in Briton Matthew Brown’s version, men play the swans, a role traditionally played by women. However, to this day the Mariinsky Theater adheres steadfastly to the classical version of the story.

An unfamiliar ballet for modern audiences

The very first Swan Lake, choreographed by Wenzel Reisinger, made its debut at the Bolshoi Theater in Moscow on March 4, 1877. However, it was not popular with audiences and was consequently removed from the repertoire.

“There were a lot of pantomime scenes in it,” explains Olga Makarova, editor of the Mariinsky Theater’s publishing department. “Odette talked in detail about her fate and the evil stepmother-witch, and about how only marriage would save her from the evil spell. Audience members said the dancing was poor, and critics wrote that the musical component was clearly superior to the choreographic element,” says Makarova.

At the beginning of the 1890s, ballet master Marius Petipa and Tchaikovsky himself rewrote the libretto for the Mariinsky Theater, while Petipa and composer Riccardo Drigo reworked the score. Petipa and Lev Ivanov choreographed it together. The new version of Swan Lake premiered on January 15, 1895.

“This miracle of ballet was born in a collaboration between Tchaikovsky’s self-contained music and Petipa’s and Ivanov’s very dramatically construed choreography,” explains Makarova.

Classical ballet and modern technology on one stage

However, Swan Lake in its modern interpretation is vastly different from the original version. At the end of the 19th century, males did not perform complex jumps in classical dance; they mostly moved beautifully about the stage, striking elegant poses and supporting the ballerinas when necessary. Ballerinas also looked different – their costumes were more closed, and they could not lift their legs too high onstage, as it would have been considered inappropriate.

‘All ballets should be called Swan Lake’

The ballet’s plot has been revised many times. Choreographer Konstantin Sergeyev staged a new version in 1950 that for the first time ever featured a happy ending. Whereas the turbulent waves of the lake swallowed up Odette and Siegfried at the end of the original version, in the updated version Siegfried defeats the evil wizard in a duel by tearing his wing, after which the power of evil comes to an end.

Sergeyev almost completely preserved the choreography by Petipa and Ivanov, but incorporated some modern dance innovations into his version. This is the version that we continue to see at the Mariinsky Theater to this day. Swan Lake in its current form has been performed at the theater 1,757 times.

Renowned choreographer George Balanchine described Swan Lake as the hallmark of Russian ballet and said “all ballets should be called Swan Lake – that would guarantee both lively ticket sales and success with the public.”

Throughout the years, some outstanding ballerinas have played the role of Odette/Odile, including Anna Pavlova, Galina Ulanova, Natalia Dudinskaya, Marina Semyonova, Uliana Lopatkina, and Diana Vishneva.

For inhabitants of post-Soviet space, Swan Lake became a symbol of the 1991 coup. On August 19, listeners heard nothing but classical music on the radio, while all the TV channels played the Bolshoi Theater’s version of Swan Lake (the Soviet Union’s main ballet) over and over again.

Swan Lake was usually broadcast on repeat when heads of state died; however, on August 19, 1991, there was a coup d’état. The attempt to forcibly remove Mikhail Gorbachev from office, the dissolution of the Treaty of the Union of Sovereign States – these groundbreaking events were all hidden from the eyes of ordinary Soviets to the backdrop of Tchaikovsky’s music.

First published in Russian by Tass