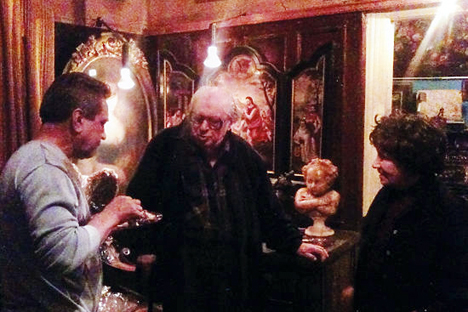 The widow of visual artist Ely Bielutin, whose art collection allegedly contains work by Leonardo, Michelangelo, Rubens, Velasquez, and many other masters, has bequeathed her husband’s paintings to the Russian state by making the Russian president their legal guarantor.

When Russian visual artist Ely Bielutin died in February 2012, he left behind an art collection believed to include paintings by old masters such as Michelangelo, Rubens, Rembrandt and Leonardo, among others. His widow Nina Moleva has now revealed that she has bequeathed the priceless works to the Russian state – but for legal reasons, the collection will be given to Russian President Vladimir Putin.

“We wanted everything to remain in Russia,” said Moleva. “When my husband died, I found out that by law I can bequeath property only to a private individual or an institution. I convinced the lawyers that as the owner of the collection, I have the right to give it to whomever I want, but I had to make a caveat that in this case the president will be a legal representative of the government.

Today, the building that houses the collection is guarded by police around the clock.

Is the Bielutin collection genuine?

Art periodical The Art Newspaper Russia recently published an article casting doubt on the authenticity of the Bielutin hoard.

In a report broadcast in January 2013, Russian TV channel Kultura announced that the collection would officially be transferred to the state on April 1, 2013, prior to which the house would be guarded by order of the president.

Yet the collection has still not been given to any museum, and the Pushkin State Museum of Fine Arts has refused to accept it (although the museum has the biggest collection of European art in Moscow), with the museum’s specialists in Italian art expressing skepticism about the expertise of Nina Moleva.

With a number of high-profile resonance scandals connected with fake art and purchases having taken place in Russia over the last few years, it is unsurprising that some experts have cast doubt on the claims of Bielutin’s widow. Yet it remains unclear whether a full investigation and technical examination of the collection by specialists is to be organized.

Bielutin’s father Michele Bellucci, the son of an Italian conductor, came to Russia after the Revolution. He later married the daughter of Imperial Theater artist Ivan Grinev, who soon after gave birth to a son named Ely. Ely inherited his father’s surname, but it was Russified to Bielutin.

“Bellucci?” I raise my eyebrow. “That’s a familiar surname…”

Michele Bellucci, who became Mikhail Bielutin in Russia, eventually fell victim to the paranoia of the Stalinist era: He was arrested in the street and shot without trial in 1927.

During the interrogation he kept silent about the secret collection, which had been hidden away in a house on Nikitsky Boulevard during the Russian Civil War.

“Grinev was paid well at the theater,” Moleva recalls. “He received 10,000 rubles in gold for each show. A horse cost 5,000 rubles. There were 11 shows a year. He wanted to become a patron of the arts like [renowned 19th-century collector Pavel] Tretyakov, so he bought paintings at European auctions.

According to Moleva, Grinev’s dream was to open a free gallery for the people of Moscow, named after him. She tells the story of how he acquired a Leonardo from France. “He bought it at a sell-off. The painting dates to 1478. It wasn’t finished by the master himself, but by his disciple Bernardino de’ Conti,” she says.

Since the majority of the ceilings in their house were 3.05 meters high, but several were five meters high, Grinev was able to construct a secret attic space by lowering the ceiling. In 1919, Grinev rolled up his Rembrandts and Rubens on rolling pins, packed the sculptures in bags, and hid them all in this loft. The family was soon evicted, and the 12 rooms became a communal apartment for proletarians.

Fortunately, no renovations were made in the apartment between then and when the newlywed Bileutins – Ely and Nina – returned decades later.

It seemed an impossible task for Ely to get his grandfather’s apartment back. However, suddenly in 1968 the Moscow City Council offered to give back a portion of her husband’s grandfather’s living space to Nina - three rooms out of the original 12. Ely’s mother explained where the treasure was hidden.

Could it be that none of the owners had climbed up to the attic in 50 years? As it turned out, the room below belonged to one family, while the room next door belonged to another. The families could not decide amongst themselves to whom the attic belonged.

The Bielutins removed the paintings from the attic and realized in disbelief that Grinev’s legacy still existed. It was real.

What to do with the treasures?

Bielutin’s private museum was launched during the Soviet Union, against the wishes of the authorities. Dozens of paintings were given away to museums: Kuskovo, Ostankino, and the Tretyakov Gallery.

According to Moleva, experts at the Paris-based auction house Hôtel Drouot, which Grinev loved to visit, have appraised the entire collection. The starting price for the collection at auction is approximately $400 million, but its real value is $2 billion.

Bielutin’s widow is asking for nothing from the authorities. She even pays her own rent. She is being offered nothing and given nothing in return.

“…Why Putin? Remember the end of 1999 and Yeltsin’s famous ‘I’m resigning’? Putin came to power and soon after signed an Order of Honor for Ely Bielutin. When my husband passed away, the president personally determined the place of his burial: Novodevichy,” Moleva explains, referring to the convent where many of Russia’s most illustrious figures are buried.

After the reading of Nina Moleva’s will, President Putin – or, as he is referred to in the will, “the legal representative of the Russian government” – visited the house. He just looked at the paintings, then left without saying a word.