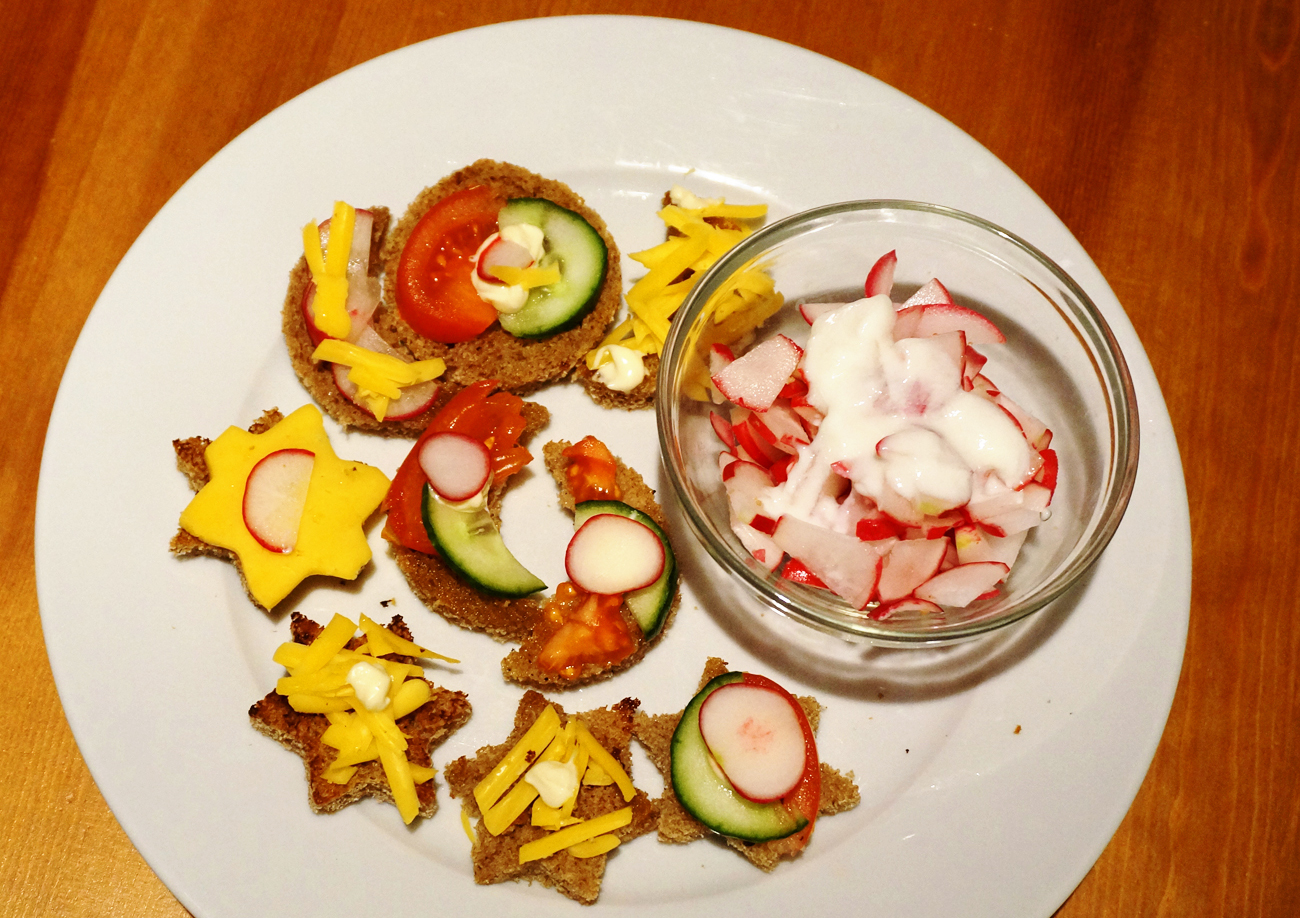 Salad with radishes and sour cream, sandwiches on toasted bread.

Anna Kharzeeva
Russians love bread, but ask for a sandwich and you’ll likely be asked what kind of soup you want.

Five months into the project, I am finally starting to develop a Soviet cooking mentality. When choosing a menu for this week’s lunch, I studied the inside of my fridge and decided the radishes had to be used up soon. Normally I would choose something based on almost any other reason, and after some time would throw the radishes out because, well, I didn’t need them for anything I made that week. That wastefulness should be over thanks to this project, and I feel very good about that.

The other part of my lunch – sandwiches on fried bread, had nothing to do with being fridge-smart – that just sounded fun. You’re supposed to cut out funny shapes and then decorate the bread with various toppings, and – always –with mayonnaise.

For a country obsessed with bread, Russians don’t do much in the way of sandwiches. Growing up, I was always told that sandwiches are “not food,” and if you’re hungry, you should go eat some soup. With bread on the side, of course. Bread came with just about every meal – my grandmother can’t live without it and calls herself a “bread soul;” she will even have bread with pasta.

Gastronomic Goodwill: Beyond borscht and vodka

She still sounds like she’s done something she should feel guilty about whenever she admits to having had a “buterbrodik” (little sandwich) with pate, herring, cheese, or, indeed, the popular Australian spread Vegemite.

Over at her place, you will never get a sandwich for lunch, but there will be croutons to go in the soup (on a good day my brother will even leave some for me), bread on the side, and then sometimes matzo as well.

She told me even more about the time of the evacuation, which is obviously a time she goes back to quite a bit, and remembered her 9th birthday party there:

“My mom made rye flat bread, stewed potatoes with onion and crackling and boiled sugar beet down to candy. Everyone considered it an impressive spread. I said to my mom dreamily: ‘when the war is over, we can make lots of white bread croutons!’ It didn’t even occur to me to think that when there is lots of fresh bread, you don’t need to make croutons.”

I’m so glad she still makes croutons though, as they taste far better than the Soviet sandwiches. Making them was a lot less fun that I thought and the result… well, they won’t go winning any sandwich competitions, although they could win a prize in the “funniest looking” and “most mayonnayisey” categories.

I achieved the goal I set out for myself, however – using up the radishes – and that is a good result. I thought, cooked and ate Soviet, and now I can go take a big long nap, as all this cooking is exhausting. I take back what I said last week about “three hours making dough feels like nothing.” This week it’s “three hours napping feels like the best use of time.”

Salad with radishes and sour cream 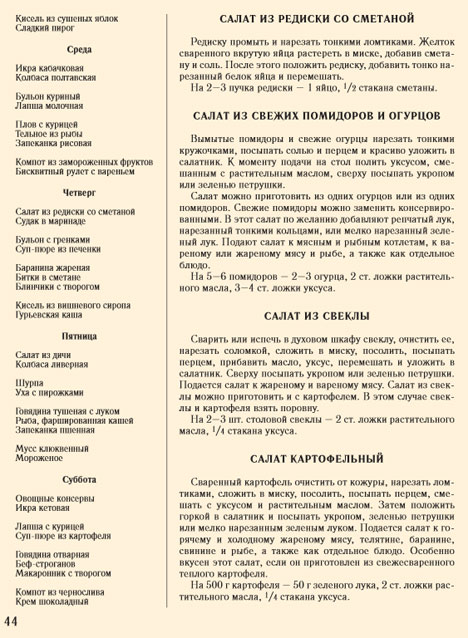 The recipe from the Soviet Cook Book, page 44. Click to enlarge the image

Wash the radishes and slice them thinly.

Separate the egg yolk from the egg white.

Slice the egg white. Mash the egg yolk in a bowl with sour cream and salt.

Add slices of radish and egg white and mix. 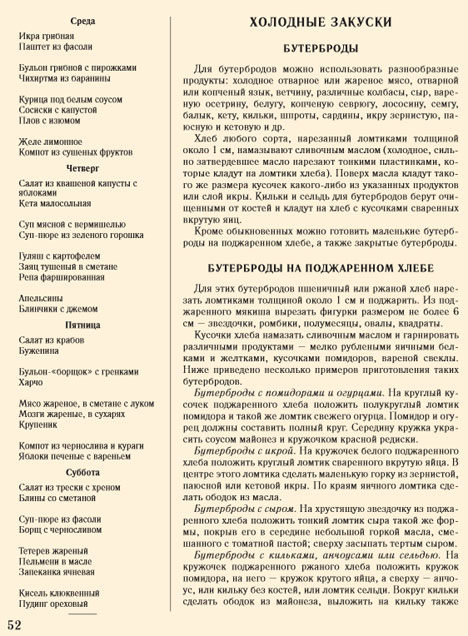 The recipe from the Soviet Cook Book, page 52. Click to enlarge the image

Cut wheat or rye bread into slices about 1 cm thick and fry. After the slices are toasted, cut figures no larger than 6 cm - stars, diamonds, crescents, ovals, squares.

Spread the slices of bread with butter and garnish with a variety of products - finely chopped egg whites and yolks, sliced tomatoes, boiled beets.

Below are some examples of the preparation of such sandwiches.

Sandwiches with tomatoes and cucumbers
On a round piece of toasted bread, place half a slice of tomato and half a slice of a cucumber to form a circle. Put a dot of mayonnaise in the center of the sandwich and top with a radish slice.

Sandwiches with caviar
On a circle of white toast, place a round slice of hard-boiled egg. In the center of the slice, put a small portion of caviar.

Cheese sandwiches.
On a star of toasted bread, put a thin slice of cheese of the same shape. Cover it with oil mixed with tomato paste and top with grated cheese. 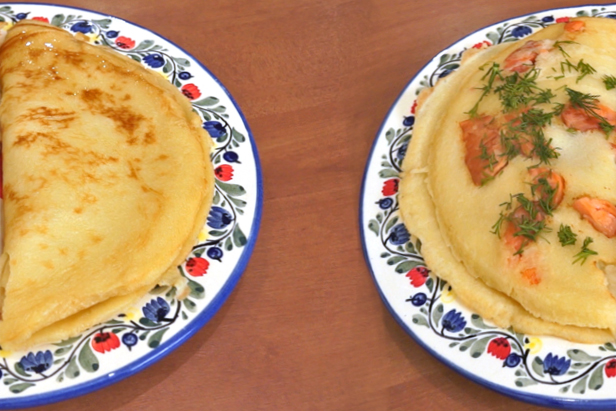 Delicious TV: Pancakes on the eve of Shrovetide

Sandwiches with sardines
On an oval-shaped slice of toasted bread, put a piece of boneless sardine, cover with mayonnaise. As an option, top with ½ Tablespoon grated boiled spinach or tomato paste. Cover with half a slice of lemon without skin and seeds.

Sandwiches with salmon
On an oval-shaped slice of bread, put a piece of salmon. On one end, decorate with oil, caviar, leaves of parsley and a slice of cucumber.