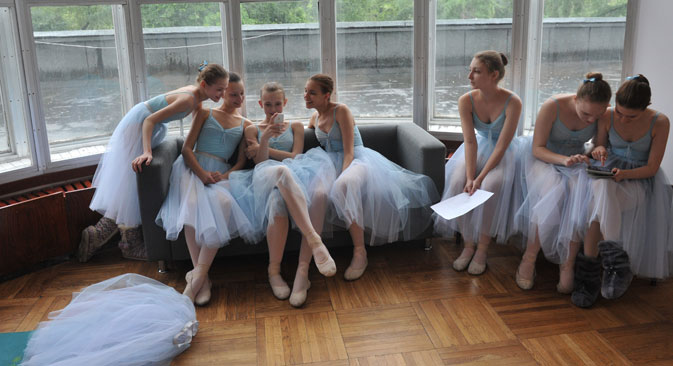 The Russian ballet tradition is one of the most influential in the world. Despite the fact that most ballerinas stop performing by their late 30s and dancers have less than a five percent chance of becoming a soloist, parents still enroll their children in ballet schools hoping that their child will be the one to shine on the stage of the Bolshoi or the Mariinsky.

All Russians are proud of their ballet, even those that rarely watch it. During the Soviet period for every place in a choreographic institute, there were 100 people in competition. Today ballet's popularity still runs high. The Ilse Liepa Studio begins accepting children at the age of two and a half, says the school's co-founder Maria Subbotovskaya.

"Nothing trains the body like the ballet," says Subbotovskaya. "Exercises with the concertmaster teach the child to appreciate classical music. All movements are beautiful and harmonious. They develop the body, especially its poise."

In other countries, Russian classical ballet is often associated with the leading Russian theaters, the Bolshoi and the Mariinsky, where the dancers are mostly graduates of the Moscow State Academy of Choreography and the Vaganova Academy of Russian Ballet. It is practically impossible to prepare for entrance to such institutions because natural attributes – such as flexibility, being able to rise and jump, and a good ear for music – play such a leading role. Students are subject to an intense screening process.

"About 98 percent of children study ballet for themselves," says Subbotovskaya. "Perhaps they would like to continue, but there are very few little stars. Raising such a child is tough work. Our school has been operating for eight years and in all this time only five of our students entered the Moscow State Academy of Choreography."

Yet, world-famous Russian ballet dancers such as Anna Pavlova, Galina Ulanova and Rudolph Nureyev had average physical characteristics. That is why experienced teachers of choreography say that physique is not the most important thing.

"If the child has the will and a dream, that is already a lot," Subbotovskaya says. "Methodology alone won't yield any results. Character and discipline are fundamental, while physical fitness can be worked on. When we see a child with character and discipline, we talk to their parents. If they agree, we put more effort into the child and have ballet become the main direction in his or her life."

Natalya Mostovaya, 38, is a former ballerina. Intense daily training sessions and a dream brought her to Moscow from Ukraine as a young girl. After years of studying, taking roles in circuses and minor theaters, and endless attempts to make it into a major ballet company, she decided to start teaching at the age of 30. Now she is the Director of the Ribambelle Ballet School. She does not regret anything. Choosing to dance was solely her decision.

Classical ballet and modern technology on one stage

"Often parents do not understand the details of the profession and decide that their child should dance,” says Mostovaya. “Problems arise if the child does not have the desire or natural talent. If parents pressure the child, his or her life will be broken. Even among the graduates of the ballet academies only five percent make it into a good company and even fewer become soloists."

Competition among ballerinas is especially high, since few boys are enrolled in the academies. For example, since opening in 2006 only 15 boys have studied at the Ilse Liepa Studio. For the majority of dancers their career finishes before it even has a chance to start.

"If you haven't made it by the age of 23, you must seriously start thinking about your future," says Mostovaya. "In most cases the girls become teachers, get married or obtain a second degree. A ballet dancer's life is short: most retire by age 38."

Often the results do not match the amount of time and resources invested, let alone the toll it can take on one’s health. In Moscow three monthly lessons cost about $500.

The alternative to children's ballet schools is dance classes. Moscow has thousands of them and many are free. According to a 2012 Russia Public Opinion Research Center survey (WCIOM), of the 61 percent of Russian children that attend extracurricular activities, 17 percent go to dance circles, which is second in popularity after sports.

But it is rare for a child to choose dancing as their profession. Muscovite Alla Kremleva spent 10 years in dance classes before she entered the university. Now she is the director of preschool and elementary school education at Novy Disk.

"It was a great joy and I couldn't wait for each lesson,” says Kremleva. “I even danced at home, repeating the movements and following the videos. Then I had an injury that did not permit me to increase the training and advance to a higher level, even though the desire was there. Now I am thinking of encouraging my daughter to study dancing."

Despite all the difficulties associated with the profession, young children still want to be artists. According to a 2013 survey by children’s charitable fund Deti Mira, 16.4 percent of Russian children aged 4-6 dream of an artistic profession, including the ballet.

Diana Vishneva, a timeless and lyrical ballerina equally at home with the American Ballet Theater in New York and the Mariinsky Ballet in St. Petersburg, is among a handful of dancers and choreographers who bridge the divide of cultural cold wars past and present.