Peter Greenaway: 'Perhaps they will take offense with me in Russia' 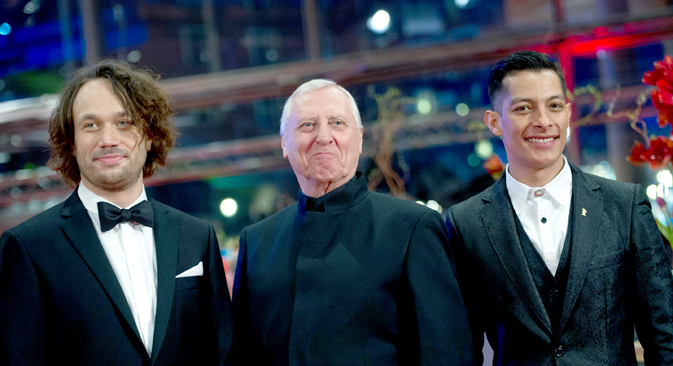 Director Peter Greenaway and actors Luis Alberti (R) and Elmer Back (L) arrive for the screening of the movie 'Eisenstein in Guanajuato' at the 65th Berlinale International Film Festival in Berlin February 11, 2015. Source: Reuters

The British director talks about his new film, "Eisenstein in Guanajuato" that premiered at the Berlin Film Festival, the first of two films he is making about the Russian filmmaker.

Greenaway sees Eisenstein as one of the world's greatest directors; his new film focuses on the Soviet director's 1931 visit to Mexico. According to the script, he has a brief love affair with his guide, a young, married Mexican historian, Palomino Canedo.

Initially, it was understood that the Russian State Film Fund would finance the film, along with money from France and Switzerland, as well as provide unique archival materials. But then the Russian side refused to participate in the project.

Kommersant: Why did you decide make a film about Eisenstein?

Peter Greenaway: I'm 72, and I think cinema is dying. That's why I am in a rush to commemorate its most famous exponents. Eisenstein is one of them. I discovered him when I was 17. Naïve Hollywood dramas, pompously depressive German expressionism and intellectual and literary works of the French fade before Eisenstein's dynamic montage, his intellect and imagination. Eisenstein was my first hero in cinema. I followed in his footsteps – to Moscow, St. Petersburg, Odessa and Alma-Ata [now Almaty] Kazakhstan, where [during the Second World War] the director was evacuated. I wanted to breathe the same air, to see the same images he saw. Perhaps it is because of him that I became a director. I think [Francis Ford] Coppola said the same thing already…

Kommersant: In your film, Eisenstein's guide literally attacks the director with his emancipated eroticism... Isn’t the film more about this, rather than about creativity?

P.G.: I understand your frustration, and also the embarrassment of the Russians. Stories about Tchaikovsky or Nijinsky, who also had alternative sexual preferences, were as shocking at the time. I do not think that the film will be shown in Russia in the near future. I even think they will take offense with me in Russia. But listen, my film is not about sexual preferences. I went through a lot of archival materials, read Eisenstein's conversations with his secretary, which confirmed my guesses about his love affairs in Mexico. Okay, maybe I somewhat dramatised the story, compared to what it was in reality. But that's how directors work. They need to make a film attractive to the viewer. 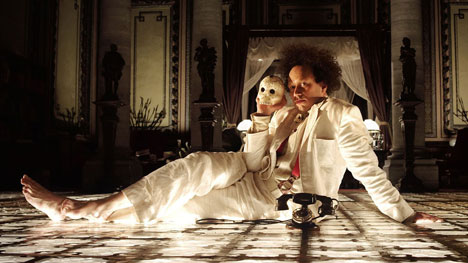 A screenshot from Greenaway's 'Eisenstein in Guanajuato.' Source: Kinopoisk.ru

Kommersant: Did Russian officials interfere with your project?

P.G.: Well, in the beginning there were some doubts about my candidacy. I was asked questions like, "If you see Eisenstein as so brilliant and provocative, why has no one made a film about him in Russia?" Or "Can we allow foreigners to make a film about our great director?" There were also other opinions. Some officials at first embraced the film with enthusiasm and negotiated funding for it in Russia. I was even promised help with archival materials. But after finding out that my film would be about the personal life of the director, among other things, they reacted guardedly to my project and refused to back it. The formal reasons for the refusal allegedly had to do with my negative reviews of "Battleship Potemkin". Still, I made several visits to Russia on my own, studied the available archives, but conducted no further talks with officials.

Kommersant: Is this the reason that Eisenstein is played not by a Russian actor, but by the Finnish-Swedish one?

P.G.: No. The thing is that Russian actors simply do not speak English well. My first wish was to find a Russian actor for the part of Eisenstein. We had auditions in Moscow and St. Petersburg, for about a hundred actors. But they either did not speak English, or spoke it badly. There were others with some experience of filming in America. But apparently, in Hollywood, they had to play gangsters because they had a rough Californian accent and they could not be taken for the role of an intellectual director, who spoke on equal terms with Le Corbusier, Brecht and Gertrude Stein. Eventually, I gave up and decided to cast Finnish actor Elmer Buck, who imitated a Russian accent perfectly.

First published in Russian in Kommersant-Ogonyok