New Tretyakov head: ‘We will strengthen our international connections’ 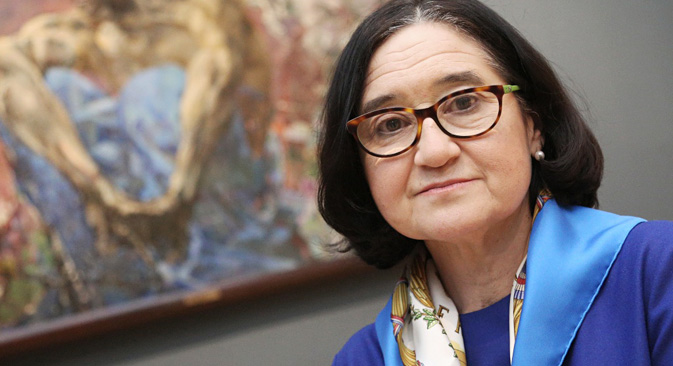 Zelfira Tregulova: My first internship abroad was in the Guggenheim museum, in 1993-94. I was lucky back then: I combined two museums, the MOMA PS1 [in New York] and the Guggenheim. Source: Oleg Gritsaenko/cult.mos.ru

The new director of Moscow’s Tretyakov Gallery, Zelfira Tregulova, brings a wealth of experience to the job: Not only did she previously work for the Kremlin Museums and organize various international projects, she also organized exhibitions abroad of Russian avant-garde, social realism and contemporary art. Now head of Moscow's most important art museum, Tregulova spoke to RBTH about the challenges the gallery faces and her objectives.

RBTH: While working at the Kremlin you curated projects all over the world, projects in which the Tretyakov Gallery also participated. You know about the gallery from within. What will be your first objectives as director?

Zelfira Tregulova:I've been working with the Tretyakov Gallery since 1988. A museum's success is measured by the comfort it provides its visitors: from the entrance to the design of the exposition to the opportunity to relax inside. The most noticeable part of the museum is obviously the exhibitions.

But no matter how remarkable the content, the format of the exposition is also very significant. People are accustomed to gadgets and you can't opt out of using technology today. Therefore, I intend to look into the projects and think about how I can make the expositions more effective and attractive.

RBTH: The Tretyakov Gallery on Krymsky Val Street also has the problem of navigation: Often neither Russians nor foreigners can find its social realism and avant-garde treasures, including Malevich's Black Square.

Z.T.: Yes, this problem exists. The gallery shares the Central Artist's House building with another center, so many people get lost and sometimes don't understand where the entrance to the gallery is.

So we will work with the Moscow government to create a cultural cluster with a large pedestrian area uniting the Tretyakov Gallery, the Muzeon Park of Arts and the Gorky Park with the Garage Museum.

In June, Garage is planning to open a new building designed by Dutch architect Rem Koolhaas.

RBTH: Avant-garde exhibitions take place frequently around the world, while the collection of Russian paintings that belonged to the founder of the Tretyakov Gallery remains almost unknown in the West. Will you try to popularize it?

Z.T.: After the Olympics in Sochi, [Russian] avant-garde has practically become an official Russian brand, with exhibitions regularly taking place in various countries throughout the world.

With regard to the Tretyakov collection, I can say that Russian art is still heavily unappreciated in the world, especially art from the first half of the 19th century. This period can be called the golden age of Russian painting.

I remember the great success that the exhibition "The Golden Age of Danish Painting" had at the Metropolitan. The exhibition was dedicated to the same period.

I’m convinced that a similar exhibition of Russian art would be a blockbuster, and I hope to be able to realize such a project in the future.

RBTH: Which artists would you include in this exhibition?

Z.T.: First of all Orest Kiprensky, Alexei Venezianov, Pavel Fedotov and Alexander Ivanov. By the way, we are currently preparing the "Biblical Themes in Russian Painting" project for the Vatican Museum.

Z.T.: Of course. We will strengthen our connections and try to participate in important projects, like the recent Malevich exposition in the Tate Modern.

Instagrammers get up close and personal with Russian avant-garde art

Despite the sanctions, none of the western museums have shown a lack of desire to participate in projects with Russia.

I have some thoughts on future exhibitions and how to develop the collection, but I will divulge them after familiarizing myself with the [museum’s] current activities. We will discuss them at the museum council.

By the way, I remember the discussions in the Guggenheim, when the director was always the last to speak. He would listen to the opinions of his colleagues and sometimes would make a decision that contradicted his personal view. I really liked this approach.

RBTH: You collaborated with the Guggenheim?

Z.T.: Yes, it was my first internship abroad, in 1993-94. I was lucky back then: I combined two museums, the MOMA PS1 [in New York] and the Guggenheim. It was when the Guggenheim was creating its branches in Bilbao and Berlin.

I had the unique opportunity to sit in the same office with the deputy director of the Guggenheim Michael Govan, who is now director of LACMA in Los Angeles. It was an incredible experience - I observed the work of one the most successful museum managers in America. And he is about ten years younger than me.

RBTH: You were the co-curator of the “RUSSIA!” exhibition at the Guggenheim [in 2005], which was the most visited exhibition in the history of the museum. Out of all the projects that you curated around the world, which is the most significant for you?

As concerns the combination of the place and the works I would say "Socialist Realism" in Rome was important for me. The seven works by the great [Russian painter] Gely Korzhev, hanging sparsely in halls with monumental architecture, looked like absolute masterpieces.

By the way, I am preparing work on a Korzhev retrospective. For this we will have to request some of his works from, for example, Minneapolis, which has wonderful examples of this outstanding artist.