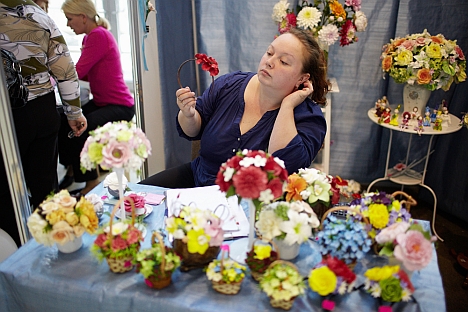 American women were behind the first commemorations of International Women’s Day, but why isn’t it a holiday in the United States now? Source: Elena Pochetova

From celebrating the International Women’s Day and Malevich’s Black Square, watching Russian ballet in the cinema and commemorating recently assassinated liberal politician Boris Nemtsov, the next two weeks are full of cultural events for people of all tastes.

This week the American Ballet Theater premiered its production of TheSleeping Beauty at the Segerstrom Center for the Arts (Costa Mesa, California). The ballet is staged by Russian choreographer Alexei Ratmansky, who was the director of the Bolshoi Ballet from 2004-2008, but since 2009 he has been artist in residence at the American Ballet Theater.

The evening's cast included Principal Dancer Diana Vishneva as Princess Aurora and she will perform once more on March 7. TheSleeping Beauty, which has a classical score by Pyotr Tchaikovsky, was first performed in 1890.

In his new staging Ratmansky retains Marius Petipa’s 19th-century choreography, but the lavish costumes (more than 350) designed by Richard Hudson are inspired by Léon Bakst's designs for Diaghilev's Ballets Russes.

The ballet’s next outing will be only in May, when it begins a run at at New York’s Metropolitan Opera House (May 29 – June 13). Think about buying tickets in advance and keep in mind that Diana Vishneva will be on stage only on June 8 and June 13, while Natalia Osipova and Leonid Sarafanov will take part on June 10. Check the ABT website for tickets and more information.

This Saturday, March 7, Brooklyn Public Library will be organizing an evening in honor of politician Boris Nemtsov, who was killed last week in Moscow. Russian writer Dmitry Bykov and renowned American translator Antonina W. Bouis, both of whom knew Nemtsov quite well, will take part.

The organizers already announced that registration is closed, but they will host a YouTube broadcast of the event, check for the link here.

If you live in Houston, TX you have the unique opportunity to celebrate the 100th Anniversary of Kazimir Malevich’s Black Square by attending the event at the “Our Texas” Russian Cultural Center on March 6.

Artists Tom R. Chambers (Houston, Texas) and Max Semakov (Moscow, Russia) come together to pay tribute to the Suprematist masterpiece with interpretations of Black Square and explorations of other forms in the genre.

Chambers and Semakov move toward Neo-Suprematism with their works, which have similarities in method or intent to earlier Suprematist works, but with digital/new media treatment that results in the hybridization of the non-objective form.

The exhibit will run through April 7 and admission is free; you can find more details at the website, along with information about the center’s other activities, such as the Evening in Memory of Elena Obraztsova on March 13, dedicated to the legendary Russian opera singer, who died in January.

If you have ever been to or lived in Russia, on March 8 you should congratulate your mother, sister, girlfriend of daughter on International Women’s Day, which is a public holiday in Russia. It has been an official holiday in Russia since 1918 and has been observed with a day off since 1965. And you may be surprised to learn that American women were behind the first commemorations of International Women’s Day.

The first observation of March 8 by women was in New York in 1908. That day, more than 15,000 garment workers – who were nearly all women – went on strike to protest poor working conditions.

The next year, the American Socialist Party declared a National Women’s Day on March 8.

In 1910, at an international women’s conference in Copenhagen, a German socialist named Clara Zetkin raised the idea of a celebration for women, held every year on the same day. It was celebrated in a number of European countries the following year.

Despite its American roots, the association of the holiday with socialism was not a good thing in the dawning days of the rivalry between the United States and the Soviet Union and it failed to take off in the U.S.

But these days nobody except Communist Party members remembers Clara Zetkin on this day and men express their love and appreciation to the women around them. The most popular gifts are flowers, but you can be more original and give one of the women in your life a ticket to the cinema for the Bolshoi Ballet.

Thanks to the French company Pathé Live, thousands of people are able to watch the performance from movie theaters around the country. Broadcasts of Prokofiev’s Romeo and Juliet will be screened from March 8 through May 11. Check out dates and locations here

One this day we advise you to read this RBTH article about rare American books in Moscow’s Lenin Library. Of the library’s 300,000 rare and valuable items, the library’s staff estimate that 2,000 are American.

On March 14, 1956 the Ampex electronics company demonstrated the VR-1000, which was the first practical video tape recorder at the National Association of Radio and Television Broadcasters in Chicago. The first magnetically recorded time-delayed television network program using the new Ampex Quadruplex recording system was CBS's Douglas Edwards and the News on Nov. 30, 1956.

What is the connection between this and Russia? Ampex was founded by Russian electrical engineer émigré Alexander Matveevich Poniatoff. The name AMPEX is an acronym, created by its founder, using his initials, A.M.P., plus "ex" for "excellence" to create the name.

One of Ampex’s recorders can be found on display in the Museum of Russian Culture in San Francisco; you can read about other Russian sites in California in this RBTH article.

While we’re on the topic of science, we should remember that on March 19, 1922 the Shukhov radio tower in Moscow started broadcasting.

As of early 2014, the tower was facing demolition by the Russian State Committee for Television and Radio Broadcasting, after having been allowed to deteriorate for years despite popular calls for its restoration. Following a concerted campaign calling for the preservation of the tower, it was announced in September 2014 that Moscow City Council had placed a preservation order on the tower in order to safeguard it.

There is a model of Shukhov's Shabolovka Tower in the Information Age gallery at the Science Museum in London. The designer’s legacy lives on in the architectural schools of Frei Otto and Norman Foster, much of whose work is inspired by Shukhov’s unique hanging and lattice shell structures. Foster, who names Shukhov as one of his gurus, used his ideas in the construction of the roof of the British Museum. These kinds of structures are widespread in modern European and Japanese architecture.

Read more: How did the hyperboloids of engineer Shukhov spread all over the world

If you are organizing a Russia-themed event in the U.S. and would like it featured in this column, forward the press release to us@rbth.com and we will consider it for publication.