Nothing says spring like minced meat and icing sugar 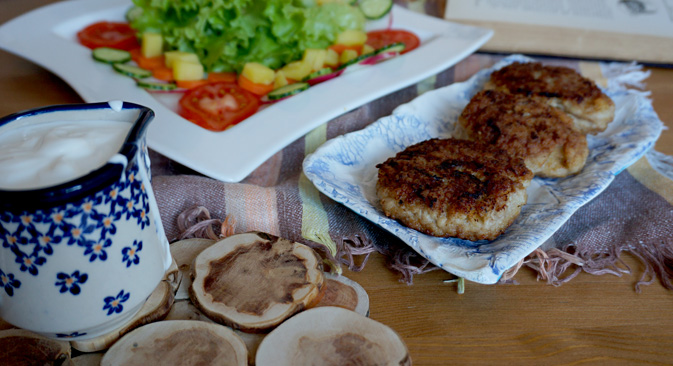 How did a salad of common vegetables served with uncommon dressing come to be called “spring?”

“Burn the skin of the chicken, disembowel it and rinse.” Just the instructions I want to read on a beautiful sunny spring morning. “Separate skin and meat from the bones and put through the mincer” – I really must find a more sunny-weather-appropriate recipe to go with my kotlety po-pozharski (a kind of chicken patty).

Looking through the Book, I find a salad called Vesna (spring), which sounds perfectly appropriate – let spring reign in the kitchen as well as outdoors I say!

Looking further into the recipe, I wonder why boiled carrots, potatoes, sour cream and icing sugar would be in a salad named after spring. You could ask why icing sugar would make its way into any vegetable salad, but then you’d be accused of being too curious and probably told to go back home. “The curious Varvara had her nose taken off at the market,” as a Russian saying goes.

Curiosity was never encouraged anywhere in Soviet times – including the kitchen. After all, did you really want to know what doktorskaya (baloney) was made of? I remember once being told doktorskaya was made of toilet paper. After that, I stopped asking about its contents – but I can’t say I stopped eating it …

I still want to ask how the salad I’m making got the name of Vesna, but something’s telling me I won’t get an answer anytime soon. 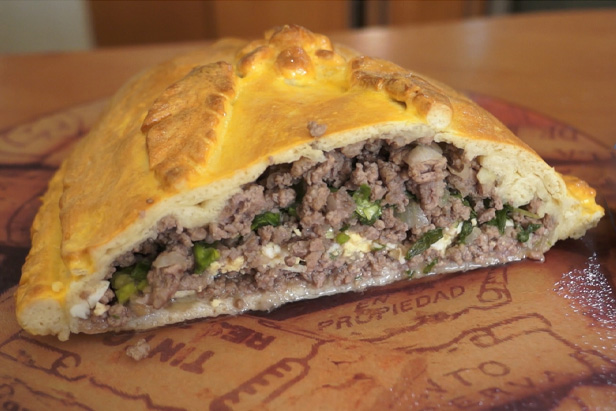 So many of the Soviet dishes had incredibly unimaginative names – salad “stolichny” (capital city), bread “moskovsky” (Moscow), gorodskaya (city) pastry and many more.

The names and ingredients of the dishes didn’t appear to have much to do with one another – for instance, salad “stolichny” is pretty much Olivier salad, and yes, there was much more food in the capital than elsewhere, but then why not call all the meals “capital city”. Or maybe: “if your dad’s a butcher,” “wait a few years,” “queue and prey” or just “you wish!”

As usual, in this moment of doubt I turn to my grandmother.

“I have no idea how they chose names for dishes,” Granny said. “Maybe because there wasn’t a big diversity in dishes, they wanted to come up with various names to make up for it. I like to think the pastry ‘kartoshka’ (potato) was named because it sort of looks like unwashed potatoes.”

“Some old names remained the same, like with kotlety po-pozharski [named for Prince Dmitry Pozharsky], others got transliterated from foreign words – like éclairs or Napoleon cake, and the dishes from the republics kept their original names like ‘kharcho’ or ‘plov.’  Keeping these names was a way to show that all republics were equal.

“But when they came up with a new dish, then there were no specific rules as to what to call them. The name givers were probably afraid to use the wrong word and went for something simple and safe.

“When fighting with ‘kosmopolitism’ they got all the foreign names out: turned French bread into ‘city bread’, and Jewish Challah into ‘pletyonka’ (twist).”

Unimaginative names to unimaginative dishes! I can just see a Soviet poster with Vesna salad on it.

I finish my lunch and it finally dawns on me: it must have been the lettuce – the pale green leaves must have inspired the name. Now I just have to wait for that pale green to appear in the streets, too!

The recipe from the Soviet Cook Book, page 191. Click to enlarge the image

Burn the skin of the chicken, disembowel it and rinse. Remove the skin and meat from the bones, then mince together. Add chicken mince to white bread soaked in milk. Mince again and add some butter and salt. Mix well. Form the ground meat into small patties and roll in bread crumbs.

Fry the cutlets in butter in an oven-proof skillet for 4-5 minutes on each side, until they are slightly browned. Then, place the pan in a hot oven for about 5 minutes, or cover and leave for a while on low heat until patties are completely cooked.

To serve, put patties on a dish and pour melted butter over them. Kotlety can be served with vegetables such as peas, beans, cauliflower or roasted potatoes.

Use the remaining chicken bones and giblets to make broth. 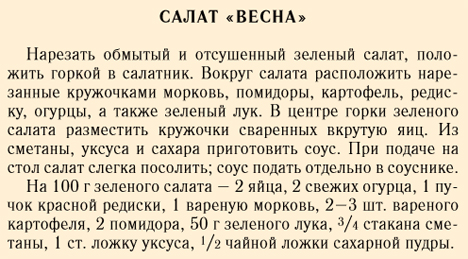 The recipe from the Soviet Cook Book, page 46. Click to enlarge the image

Wash, dry and tear lettuce, then put in a salad bowl.

In the center of the lettuce, place slices of hard-boiled eggs. Salt lightly.

Plov: Worshipping at the altar of the Uzbek food gods

Is it possible to be indifferent to a four-course dinner?