'Masha and the Bear' wins a 'children’s Oscar' 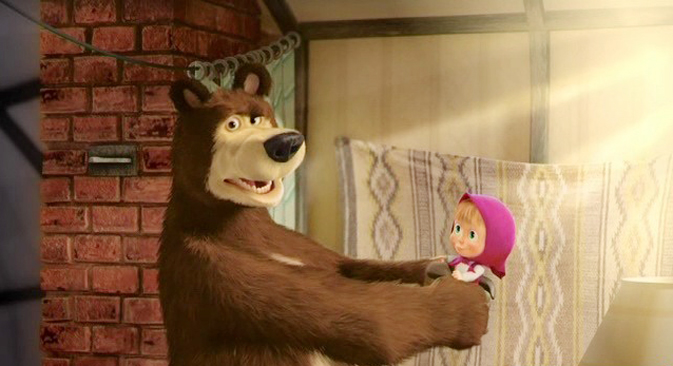 “Masha and the Bear.” Source: Kinopoisk.ru

The popular Russian animated series took the prize for Best Animation at the Kidscreen Awards.

The Russian animated series “Masha and the Bear” has won the award for Best Animation in the Creative Talent category at the prestigious Kidscreen Awards 2015, which took place last month in Miami.

"This is practically the first recognition that a Russian animation series has ever received on an international, professional level. This award, which in a way is an analog to the children's Oscar for the TV industry, says that Russian animation has entered a completely new level," said series producer Dmitri Loveiko.

Last year, Svetlana Razgulyaeva's “Why the Banana Snarls” took part in one of the competition programs of the Berlin Film Festival; Dina Velikovskaya's “My Strange Grandfather” received the award for Best Animation Film at the Amarcort Short Movie Festival in Rimini, Italy; and Constantine Bronzit's “We Can’t Live Withouth Space” was the best short film at the Cinanima's International Program in Espinho in Portugal. Olesya Schukina's “The Elephant and the Bicycle” took eight prizes at festivals all over the world in 2014, participating in competitions from the UK to China.

Masha and The Bear - Hide and seek is not for the Weak. Source: YouTube

Distribution and screening rights to “Masha and the Bear” were sold to Turner Broadcasting (Cartoon Network), France Television, KIKA, Sony Music and NBC Universal. On YouTube, the series’ channel was ranked 20th in the list of the most popular YouTube channels of 2014. Episodes of “Masha and the Bear” have been viewed on YouTube more than 2.5 billion times. Two other Russian cartoons appear in the list of the top 100 YouTube channels of 2014: “Luntik,” in 59th place and “Barboskiny,” in 69th place.

In the USSR, animation was a huge cultural phenomenon. Besides being entertainment, Soviet animations also commented on society’s hopes and fears