Going native with turnips and mushrooms 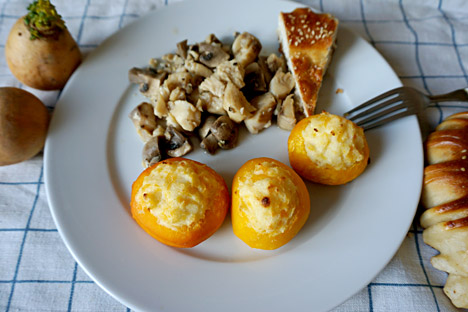 Given the availability and expense of imported produce in Russia, before too long, the Soviet diet may be the only one available.
This piece is part of the Soviet Diet Cookbook, a blog about a modern Russian girl cooking Soviet food. To read more of the series, click here.

My grandmother came upon a recipe in ‘The Book’ for turnip stuffed with semolina porridge. I thought that sounded perfectly weird, and I had to give it a go.

Turnip is the vegetable that, along with cabbage, constituted the major part of the Russian diet before Peter the Great brought potatoes over in the late 17th century. If you’re looking for a truly Russian recipe, chances are there’ll be some turnip in there. Turnip was so omnipresent that there is even a folktale named after it, describing the struggle of a family to pull a giant one out of the ground.

The tale is known to all Russian children, and to all adults whose memory is intact (I personally had to reread the story to be reminded of all the details). There is even a mural depicting the turnip story on a municipal building near my house.

As popular as turnips used to be, they seem to have been all but forgotten now. My husband bought some a few months ago, having mistaken them for beets. I think that the day I cooked those might have been the first time I tried turnips – certainly the first time in my adult life. Then again, my memory could be failing me once more. I did enjoy them though, and it felt good to eat something traditionally Russian that didn’t have any Soviet associations for me.

“We used to eat raw turnip as children – we loved it, as it was so sweet!” Granny said. As an adult, she would sometimes add turnips to soups and stews, but it was never the main ingredient in a dish. 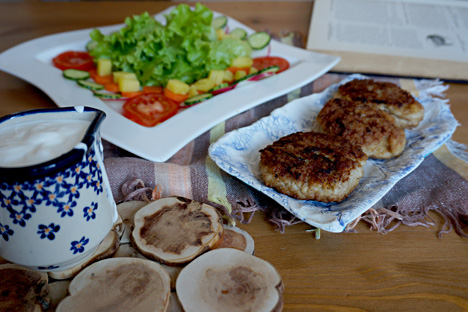 Nothing says spring like minced meat and icing sugar

Today, when walking past the turnip mural, I was actually going home empty-handed: the rather fancy store near me sells bell peppers for $3 apiece, but apparently considers itself above stocking turnips.

I did, however, manage to buy some fish as the main dish to go with the stuffed turnips I was going to make. In retrospect, it was a terrible idea to combine the two, especially because of the semolina stuffing (another food item that used to be a big part of the Russian diet).  In the spirit of going fully Russian, I got some mushrooms to serve with the turnips, too. These would be picked every summer and then dried, marinated or pickled for the winter. Granny says she remembers seeing hot sheep lard used instead of a lid to seal a glass jar of mushrooms. I owe my taste buds a huge thanks for not liking marinated mushrooms!

The end result of this dinner was generally good. The fish and mushrooms were nice, although the Crimean white wine I served with it was probably not the best choice. I don’t know that Crimean wine ever is. The turnip didn’t taste sweet to me at all, and was quite an ordeal to prepare, but it looked pretty and bright, and semolina added enough sweetness.

When I was starting this blog, the food sanctions had just been imposed, but shops still had enough stock, and there was still hope everything would go back to normal fairly soon.

Now I’m just over halfway through the project, and a lot of the food is out of stock, and prices have gone through the roof. I think I might go buy myself some lapti (traditional Russian sandals) – they seem like appropriate footwear if you’re eating turnip, which might be among the few things I’ll be eating on a regular basis soon.

The sellers at the market tell me “the euro is up, so potatoes are up, too.” With that kind of attitude, who knows what will happen to my supplies by the end of this project? Maybe I’ll end up full on the Soviet diet! 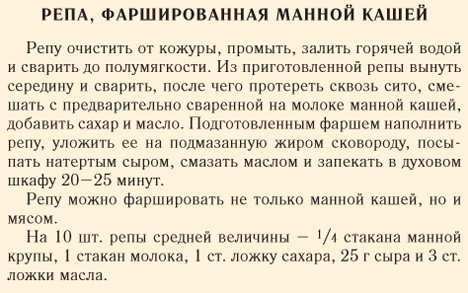 The recipe from the Soviet Cook Book, page 219

Remove the center of the cooked turnips and boil them, then rub through a sieve, mix with semolina boiled in milk, and add sugar and butter.

Fill the hollowed-out turnips with the mixture, then place on a baking tray, sprinkle with grated cheese, brush with butter and bake in the oven for 20-25 minutes.

The turnips can be stuffed not only with semolina, but also meat.

The recipe from the Soviet Cook Book, page 133

Cook the fish for 15-25 minutes. Cut the crust off the bread, and cut the soft remainder into large and small slices. Cut one large slice and two small slices for each piece of fish, then fry them in butter.

While the fish is cooking, drain the broth into another pot and prepare the sauce. After removing from the heat, add salt and the yolk of the egg, beaten in a glass with a tablespoon of butter, and mix well with a spoon.

Serve on a warmed plate on the fried slices of white bread, topped with the mushrooms. Strain the sauce through a sieve and pour over the fish. Spread the little fried slices of bread around the fish. You can also serve with asparagus, pea pods or beans and green peas.