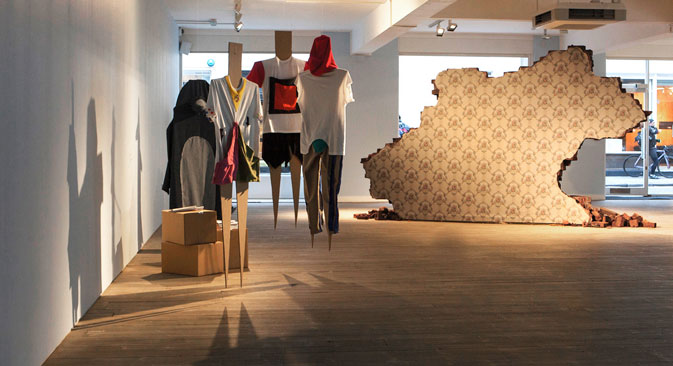 RBTH for the UK is expanding its scope of coverage to all of English-speaking Europe! Find out what Russia-themed events are taking place near you over the next two weeks.

GRAD's new exhibition “Borderlands,” which is open in the heart of London until May 16, reveals the line often drawn today between art and social comment, aesthetics and activism.  The organizers have invited artists working in different media to explore whether art made today in their countries can be both politically engaged and have aesthetic value of its own.  The exhibits, which present the work of contemporary Russian and Ukrainian artists, feature works such as a brick sculpture that recalls the recently redrawn map of Ukraine and footage of young Muscovites filmed on a mobile phone. The artists Zhanna Kadyrova (Kiev) and ZIP collective (Krasnodar) will build their installations onsite, while Nikita Shokhov and Yevgeny Granilshchikov (both from Moscow)  will present their photo and video works.

The Dance, the famous painting by Henri Matisse from St. Petersburg’s State Hermitage Museum, is guesting until July 6 in Paris. The event is part of the exhibition “Les Clefs d’une Passion,” organized by Foundation Louis Vuitton. According to the foundation’s art director Suzanne Page, the goal of the project is to focus on the great masterpieces of art which became the keys to the future. Matisse’s The Dance, presented in Paris by the Hermitage and the Pushkin Museum of Fine Arts, was one of such trendsetting pieces.

3) Maestro Gergiev conducts in the Netherlands

Legendary art director and conductor of the Mariinsky Orchestra Valery Gergiev is to conduct the Royal Concertgebouw Orchestra in the Netherlands for three days from April 2-4 as part of a program titled A Musical Firework with Valery Gergiev and Leonidas Kavakos.

The program will see the maestro and Greek violinist Kavakos collaborate on Dmitry Shostakovich’s First Violin Concerto at the Concertgebouw in Amsterdam on April 2 and the De Doelen concert hall in Rotterdam on April 4. The symphony music part of the tour features masterpieces by Wagner, among which are highlights from the operas Parsifal, Götterdämmerung and Die Meistersinger von Nürnberg. A day later in Amsterdam the maestro will run an open master class in conducting in participation with the Royal Concertgebouw Orchestra.

The theater “U Mosta" in Perm (800 miles east of Moscow) founded in 1988 by Sergei Fedotov, stunned the local theatrical scene with its vivid, groundbreaking performances. The founder’s productions are a bridge between the real and the supernatural, the usual and the mystical. This April, after a tour in Germany and Austria, the provocative theater goes to Eastern Europe with Fedotov’s play The Beast in Prague (April 3), and prominent shows The Cripple of Inishmaan by Martin McDonagh in Prague (April 4) and Budapest (April 10)and Marriage by Nikolai Gogol in Bratislava (April 8).

Diana Vishneva at the London Coliseum