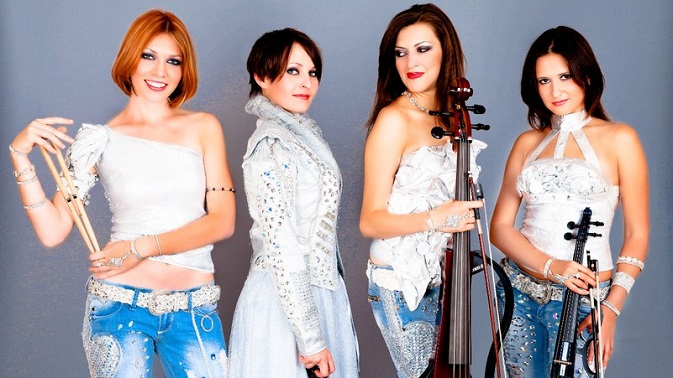 A Russian string quartet, Silver Strings, has charmed the Indian public with their mellifluous music. The four women have, in turn, adopted India as their home, and they have grown to love it.

The Russian female string quartet Silver Strings is not much known back home, perhaps with the exception of hometown Samara, on the Volga. But over the last three years, it has become one of the most popular foreign women's bands in India.

The quartet, which comprises two violin players, 1 cellist, and a drummer plays international hits, Hollywood soundtracks and latest Bollywood hits as part of their repertoire.

The girls do not only play at private events, but have also played at some major events in India, including the Vibrant Gujarat summit, at which leaders from around 20 other countries were present, a Formula 1 launch event, the Lakme Fashion week and other high profile public events.

The quartet leader, violinist Irina Shemyakova, long wanted to create a project that would become something more than just a commercially successful band. She wanted the band to have its own character, which was both recognizable and "catchy".

Starting an international career was a big risk, but the success of an unexpected contract in Macau (China) became an important first step in this direction.

None of this was easy and came after a lot of hard work by all the band members. This included night-long rehearsals and even studying English textbooks.

In Macau, Silver Strings gained in stature and discovered their capabilities and grew. Then, there came invitations and a contract to play in India.

But it turned out differently for Silver Strings. This is the fourth year in a row that the band has been receiving invitations to play at various Indian events.

"We have come to occupy such a tight and cosy niche in the Indian entertainment business, we can say, we came together almost like pieces of a puzzle. But this didn't come all at once. Such miracles rarely occur in the life of a musician. Most commonly, there is much hard work behind stability and good position, and that is the case of Silver Strings," said group drummer, Ekaterina Ananeva.

"Indians are very musical by nature, they all sing. Even if the music we play is unfamiliar to them, they become infused with the melody, the rhythm and they become interested," said Ananeva. "For example, take a famous Russian folk song, "Korobeyniki" (Peddlers). At first, the dashing Russian prowess is hidden behind the smooth melody, then it breaks through the mischievous pizzicato, and then runs free, becoming full and comprehensive. Even those who have never heard this song before, feel the atmosphere of the dashing "Russian-ness" and become charged by it," she said. "Sometimes it seems that after the last passage the Indian audience will exclaim the valiant 'Ehhh!'"

Getting to know India better with time, the girls manage to convey the atmosphere of popular Indian music and Bollywood film hit songs as well.

"What poignant lyrics there are in India! When one manages to play it right - it's a real reward for a musician," Ananeva said. "Once we played 'Mahabeti' in acoustics, only strings, and the audience gasped after the first note! When we finished, the famous Kirron Kher, actress and producer, stood up from her seat and applauded. Such moments give a great boost for further work, and inspire us for greater musical exploits," she said.

Today the band has thousands of Indian fans, and the invitations to play come flowing in.

"We are very fortunate that we know little about our celebrity status," Ananeva said. "Yes, we are on the front page of Hindustan Times and Delhi News, but we also buy potatoes in the street market and take auto-rickshaws to go somewhere. Our bosses post clippings from the newspapers in our office. In some of these clippings we are called "amazing" and "fabulous", we have thousands of subscribers on Facebook, and now people recognize us without makeup in the airports. At the same time, we all live together, cook dinners together, take walks in the parks and do not let the 'star syndrome' interfere with our daily life. India teaches you to be humble and not arrogant."

The girls accept India as it is. "They say there are only two ways to take India - love it or hate it. Despite its commotion, noise, heat, odours from municipal landfills and traffic jams because of a cow napping in the middle of the road - our choice is Love," Ananeva said.

"Whenever we are asked 'why India, why not Russia?' we reply that it is destiny," she said. "Аs long as some invisible force is helping us, opening up new opportunities for work, for development, as long as we realize new projects, participate in festivals, create new tracks dedicated to India - we have no right to turn this page."

Based on materials from vninform.ru.