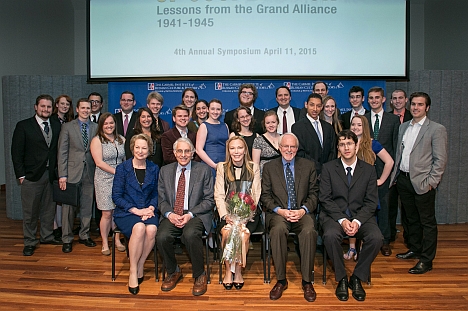 The newly-formed Carmel Institute of Russian Culture and History has announced its arrival with a symposium at the American University in Washington, D.C. devoted to “The Strength of Cooperation: Lessons from the Grand Alliance, 1941-1945.” Participants included wartime U.S. President Dwight D. Eisenhower’s granddaughter and former American ambassador to Russia John Beyrle.

The American University in Washington, D.C. recently hosted its 4th annual symposium, in collaboration with the newly-established Carmel Institute of Russian Culture and History. Titled “The Strength of Cooperation: Lessons from the Grand Alliance, 1941-1945,” the April 11 event turned out to be something more than just an ordinary historical meeting.

The first large-scale event organized by the Carmel Institute, the symposium reminded its guests about the profound cooperation between the U.S. and the Soviet Union during WWII and stressed the importance of the role such unity could play in the future, as well as how this might be achieved given the current political situation.

Instead of stating formalities about the countries’ significant shared history and the need for future cooperation, symposium participants focused on intimate family stories that appeared to provide much stronger proof of the cooperation between the United States and the Soviet Union during World War II.

Susan Eisenhower, for instance, told the audience about the personal, almost friendly relationship between her grandfather, Dwight D. Eisenhower, and Soviet Marshal Georgy Zhukov. According to family history, once Zhukov even complained to Eisenhower about some American journalist who had written that Zhukov was shorter than his wife. The Red Army general was deeply offended by this article and asked Eisenhower to punish the reporter.

Looking to the past for inspiration

John Beyrle, former American ambassador to Russia, told an incredible story about his father Joseph Beyrle, who is thought to be the only American soldier to have served with both the United States Army and the Red Army in World War II.

Beyrle senior entered the war as a paratrooper in the U.S. army, was captured by German soldiers, then spent seven months in seven different prisons. After two escapes ended in recapture and subsequent torture and beating, Beyrle  eventually succeeded in his third escape attempt, before coming into contact with the Soviet army.

The story goes that Beyrle then decided to join the Red Army to continue his military service, but after only one month he was wounded and evacuated to a field hospital in Poland. There he received a visit from Soviet Marshal Georgy Zhukov. Joseph Beyrle took this chance to ask Marshal Zhukov to give him any document that could prove his identity – by that time he had no I.D. to prove that he was an American citizen.

“The next day a letter appeared; it was written in Russian, which my father could never read. But whenever he showed it, whether in the Russian army or to Russian military, he was given immediately a seat on a train or a hot meal. It was a magic letter. Obviously it was signed by Marshal Zhukov. Thanks to the officers of the Soviet military and the letter from Marshal Zhukov, my father was delivered to the American Embassy in Moscow,” said Beyrle.

However, the story of Joseph Beyrle is pretty well known in the U.S., unlike the history of WWII in general. Peter Kuznick, professor of history at the American University, admits that young Americans know almost nothing about this war.

“Last semester I asked my students how many Americans died in WWII and how many Soviet soldiers died in this war. They said about 90,000 Americans and 100,000 Soviets,” said Kuznick at the symposium. “The American view is that the war started with Pearl Harbor, then it went to sleep for a couple of years and then started again with the Normandy, with D-Day.”

Sergei Kislyak, Russian Ambassador to the U.S., acknowledges that few people on the streets would remember that the United States and the Soviet Union were allies in the war.

“It is so important that this memory carries on, because history teaches us that we have more chances to succeed if we work together rather than if we work against each other. It is important to remember what we did together during WWII today, when we see fewer allies than we expected to see five or 10 years ago,” said Kislyak.

“It is also important that Americans and the American younger generation knows Russia, knows what we are and, what is equally important, what we are not,” stressed the ambassador.

In order to achieve this goal the Russian Embassy has been working in close cooperation with the Initiative for Russian Culture (IRC). However, since March 23, the IRC officially no longer exists. Two weeks prior to the symposium international philanthropist and businesswoman Susan Carmel Lehrman announced that she was establishing the Carmel Institute of Russian Culture and History, which will elevate and expand IRC’s robust programming in cultural diplomacy.

“I believe that, given the current political climate between our two nations, now is the most important time to establish this institute. Rather than ignoring the problems between our nations, our program focuses on culture, shared values and common interests as well as differences,” said Lehrman.

According to Dr. Anton Fedyashin, director of the institute, in the last four years almost 15,000 people have attended events organized by the IRC. Fifty students have visited Russia either to study Russian or to take summer classes, and 20 more are going to Russia this summer. Yet as Fedyashin explains, this is only the first step.

“The Carmel Institute facilitated the establishment of a direct student exchange program with MGIMO-University and the Higher School of Economics in Moscow. The institute will also offer new courses on cultural diplomacy and Russia's relationship with the West,” he said.

Richard Portwood, a student of Georgetown University, who last year received a scholarship from Susan Lehrman and spent several weeks at the Higher School of Economics in Moscow, believes that the initiative is invaluable in building bridges between the two nations on a personal scale.

“You can just go somewhere as a typical tourist, see something, enjoy your trip. But what Carmel Institute does for young people is the opportunity to have a deeper understanding of culture and history. Moreover, it gives an opportunity to interact with young Russians,” said Portwood to RBTH. “But the most important thing is that this institute as long as other initiatives helps bring together citizens from both countries, improves people-to-people diplomacy.”

Diplomacy the only answer

The only question that all of the symposium’s guests and participants seemed to struggle to answer was how to solve the current crisis in the relationship between the two nations, with none of the speakers being able to present a solution.

Susan Eisenhower, however, hinted that a possible answer could be found in the same joint background that was mentioned so many times during this symposium. She quoted the words spoken by her grandfather at the Geneva Summit in 1955: “War has failed. The only way to save the world now is through diplomacy.” 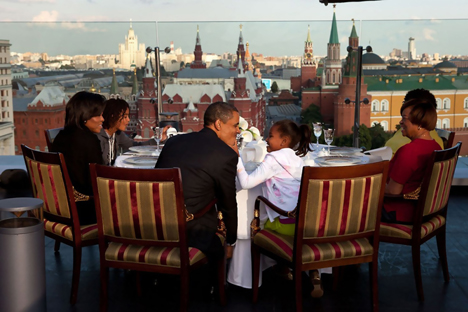