The Liberation of Crimea: One of 10 blows which felled Hitler 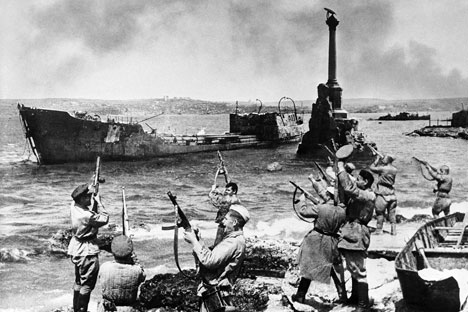 The Crimean operation demonstrated the quintessence of combat experience, which the Red Army had gained by that time. Source: Evgeny Haldei / TASS

The Crimean offensive that led to the liberation of the peninsula from the forces of Germany and its allies began on April 8, 1944. Commemorating the anniversary of the event, historians stressed the unique nature of this operation, launched to liberate Crimea, and its vital military role in clearing the path for the Red Army to reach the Balkans.

The Crimean offensive of 1944, which saw the victorious advance of the Red Army and the rout of the Germans, has been called unique by historians, and one of the 10 critical ‘blows’ delivered by (Joseph) Stalin during the second world war, that destroyed (Adolf) Hitler. It began on April 8 and ended mid-May, by which time the 17th German-Romanian Army (Group A) was completely destroyed, and the Soviet Union regained control of this strategically crucial region.

“The wind, the snow, the rain, the mud... sappers, soldiers waist-deep in the icy water were building bridges, and then repairing them after they were broken by storms. All this was being carried out under heavy gunfire and bombs from the enemy. A Titanic Task...” is how Boris Bozhedomov, military historian at the Research Institute of the Military Academy described the battle. He was speaking during a roundtable to commemorate the anniversary of the operation.

He was describing efforts of the Red Army to force the shallow Sivash Gulf, separating the northern part of Crimea from the mainland which was controlled by Soviet troops. To cross this gulf, the Red Army built bridges more than a mile long, in treacherous conditions.

As the historians emphasized, German forces desperately tried to cling on to Crimea. Despite the fact that German troops on the peninsula had been cut off from the mainland in the fall of 1943, Hitler refused to evacuate his soldiers and allied armies.

Mikhail Myagkov, scientific director of the Russian Military-Historical Society, said the Soviet leadership was aware of the crucial strategic importance of this operation.

In Germany, they were hoping that German soldiers would emulate the feat of the Soviet troops in 1941-1942. At that time, the Germans had required 250 days to capture Crimea, with the assault on Sevastopol lasting 30 days, while Soviet troops then liberated all of Crimea in just 35 days, and Sevastopol was taken back in just 4 days.

Before the offensive of 1944, the Red Army’s strength was reinforced with superior equipment and enhanced manpower. The Soviet group consisted of about 470,000 soldiers, against 200,000 German and Romanian soldiers.

However, in order to take advantage of this strength, the troops first had to be concentrated secretly in the two areas where the attacks would take place – Perekopa (in the north) and Kerch (to the south-east of the peninsula), using the bridgeheads previously taken from the enemy at those sites.

However, as Bozhedomov pointed out, the enemy was aware that, given the impossibility of a full-scale landing (tens of thousands of soldiers could not be infiltrated covertly), these were the only directions of possible attacks, and was working on preparations to repel them. Nevertheless, the Soviet troops quietly managed, unnoticed by the Nazis, to concentrate a significant number of troops, including an armoured corps, in a relatively small area.

The main attack came from Perekopa. The second was in the direction of Kerch, which was taken back on April 11. In just a few days, Soviet troops broke through the German defences – from both directions, and the enemy began retreating. By mid-April, Soviet troops were near Sevastopol. Two hasty attempts to break through the enemy’s defences failed, and so began preparations for a full-scale assault, which began on May 5 and ended on May 9.

As a result of this operation, the German-Romanian forces lost 140,000 men, about half of them becoming prisoners. The Red Army’s losses amounted to 17,000 men, killed in battle.

According to Sergei Chennyk, editor of the magazine “Military Crimea”, the Crimean operation demonstrated the quintessence of combat experience, which the Red Army had gained by that time. According to him, this “decisive operation” was followed by a string of continuous victories. One of the ten ‘Blows,’ or successful strategic offensives conducted by the Red Army in 1944, which led to the complete defeat of Nazi Germany.

The operation itself was distinguished by a high degree of motorization; the Red Army rolled forward quickly, with soldiers barely having to move on foot.

The operation to liberate Crimea was also distinguished by the geography of the peninsula itself; being likened to an impregnable medieval fortress, surrounded on all sides by moats.

Nevertheless, Soviet troops managed to take back this fortress in record time. As the historians pointed out, this operation opened the path to the Balkans for the Red Army, while the heavy losses suffered by Romanian troops led that country, a few months later, to abandon its alliance with Germany and join the anti-Hitler coalition.