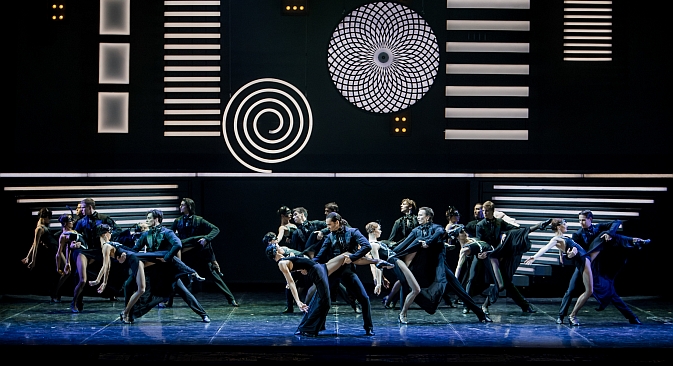 The Eifman Ballet is to present its jazz premiere “Up & Down” on its upcoming tour of the U.S. Dedicated to the temptations of wealth and the high life, the ballet explores the ill-starred fortunes of a young couple on the French Riviera. The company will also perform its 2011 ballet about the French sculptor Rodin on the tour, which starts on April 28 and will last until June.

The St. Petersburg Eifman Ballet will shortly commence a tour of the United States lasting till June. Kicking off with a performance in Minneapolis on April 28, the company will perform in seven cities, presenting a 2011 ballet about the French sculptor Rodin as well as the company’s jazz premiere, Up & Down, which premiered in St. Petersburg in January.

Residents of Chicago, New York and Costa Mesa, California will be able to see Up & Down in May. Set to music by George Gershwin, Franz Schubert, and Austrian composer Alban Berg, its title captures the whole story: the ascent of the female lead and the rapid descent of her partner.

Debauchery and glamor on the French Riviera

The main female character is young, rich, beautiful and unhappy. She is suffering from schizophrenia, brought about by her father’s incestuous relationship with her. The millionaire father sends his daughter to a mental clinic, where a young doctor who treats her soon falls in love with his beautiful patient and they get married. With him beside her, she feels better and soon the newlyweds leave the peace and quiet of the clinic and plunge into the riotous fun of the French Riviera.

Yet, every party sooner or later comes to an end: The young woman quickly comes into her own and leaves her husband, who got too carried away with champagne and a young Hollywood diva. Unable to stop himself in time, he soon finds himself back at the clinic, this time however as a patient.

According to Eifman, the blame lies with the cowardice of the doctor, who has exchanged his calling for luxury and burlesque: “After the wedding, the protagonist found himself in a world of luxury that was completely alien to him and gradually turned into a cross between a gigolo and a nurse to a wealthy companion.”

“He did not have enough determination and integrity to preserve his inner “me,” his medical talent and fence himself off from the endless social bacchanalia, ceaselessly burning through his life. In the end, the doctor is finished, both as a person and professionally. This is the price he pays for betraying himself (I am convinced, this type of betrayal is one of the worst sins).”

Ballet dancers had to take special lessons in order to master swing. However, learning a new dance style was not the most challenging part of their work. Oleg Gabyshev, who plays the doctor, admits that the most difficult thing to do was to convey “the doctor’s hypnotic look, capable of manipulating patients, of making them listen and of calming every patient down.”

In Minneapolis, Boston, Washington and Los Angeles, the dance company from St. Petersburg will perform the ballet Rodin, which first premiered in 2011.

This ballet is devoted to the life and work of two great sculptors: Auguste Rodin and his pupil, mistress and muse Camille Claudel. The couple spent 15 years together, and their subsequent breakup was a heavy blow to Claudel’s mental health. Reclusive and poverty-stricken, she finally went mad, spending 30 years in a mental asylum, where she died in 1943, forgotten and abandoned by everyone.

A fascination with madness

Both productions on the ballet company’s U.S. tour are concerned with mental health issues. Eifman insists that he does not choose these stories deliberately, yet he admits he is fascinated by the subject: “For centuries, madness was seen as a sign of inadequacy and mad people were rejected by society. Whereas for me, they are guides into a mysterious and unknown world that I, as an artist, want to explore, understand and depict.”

Eifman says that it is the “magical and infinitely rich language of dance” that allows him to do this, since it exists “outside the boundaries of rationality and laws of logic.”

“Through the movements of the body our ancestors are talking to us,” he says. “Their sensual life is preserved in the human biological memory as a set of special impulses that are revealed in dancing and that form its emotional foundation. That is why a choreographer can learn about a person’s inner world perhaps more than a doctor or a scientist.”