Discovering Russian culture in the U.S.: April 24 – May 8 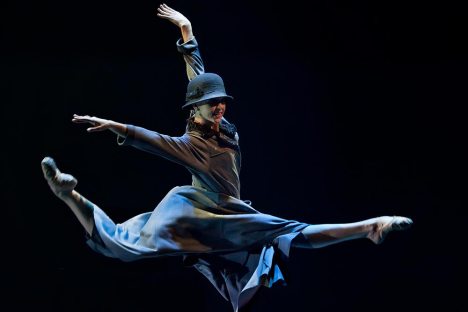 From celebrating Elbe Day to watching the Doctor Zhivago musical and the Eifman Ballet’s new jazz premiere, to commemorating actress Tatyana Samoilova, who played Anna Karenina in 1967, the next two weeks are full of cultural events for people of all tastes.

All Russia-related events taking place in the U.S. on April 24 and 25 are connected with Elbe Day, which took place 70 years ago. On April 25, 1945, Soviet and American troops cut through Wehrmacht divisions and met in the middle of Germany near the town of Torgau, 85 miles from Berlin, on the Elbe River. The allied forces had effectively cut Germany in two.

If you live in Washington, D.C. visit the memorial in Arlington Cemetery. It is a bronze plaque, immortalizing the historic handshake between Soviet and American soldiers with an optimistic plaquereading: “The spirit of Elbe lives on and conquers.”

On this day you can also watch the movie Encounter at the Elbe (1949) by Soviet film directors Grigory Aleksandrov and Alexei Utkin, with a scoreby Dmitri Shostakovich. Or also listen to the song “At the Elbe” by Fred Small:

And rest and welcome waiting for us on the other side

And Yanks and Reds laughed out loud to be alive at the Elbe.”

It’s also your last chance to visit the exhibition "Lives of the Great Patriotic War: The Untold Story of Jewish Soviet Soldiers in the Red Army During World War II," on show at the University of Virginia until April 27.

While the tragedy suffered by European Jewry in the period from 1933 to 1945 has been the focus of extensive study, the patriotism and sacrifice of Soviet Jews in the war against Nazi Germany remains mostly unknown. At the exhibition you can see archive photos, postcards and documents. If can’t make it to Virginia you can watch touching interviews with veterans in the RBTH multimedia section.

Ballet and musical lovers willbe kept happy in the upcoming months. On April 28, St. Petersburg’s Eifman Ballet starts its U.S. tour. Starting in Minneapolis, the company will perform in seven cities, presenting a 2011 ballet about the French sculptor Rodin as well as the company’s jazz premiere, Up & Down.

Check the tour locations here and even if they aren’tperforming in your city, you can always view photos from the performances in our multimedia section.

The end of April and the beginning of May is also the last chance for New Yorkers to attend the events organized for Russian American History Month. Don’t miss the second G. Gershwin International Music Competition 2015 (April 27 – May 3), which this year features 10 entrants from Russia. Find more events listed at the official website.

Those with an interest in religious studies are welcome to visit the lecture by Thomas Bremer titled “The Idea of the 'Russian World' and the Orthodox Church,” which will take place at the NYU Jordan Center on April 29. The concept of a “Russian World” (RusskyMir) has played a more and more prominent role in recent years in Russian political discourse.

Thomas Bremer, who is Professor of Ecumenical Theology, Eastern Churches Studies and Peace Studies, at Münster University in Germany, will give ananalysis of the Church’s position towards the “Russian World” concept.

Those who live in Massachusetts have the unique possibility to visit two exhibitions atthe Museum of Russian Icons in Clinton, MA.

The “Hidden World of the Czars: The Russian Empire in 3D Photographs” exhibition will be shown on April 30 and June 6.

The display will feature high-resolution original stereophotos projected in three dimensions. Visitors will be able tosee serfs in the squalor of 19th-century Russian peasant villages, the bustling ports and cities of the new merchant classes, the glittering life of the tsar and his court, and the wars and struggles that signaled the end of the empire.

Another exhibit, opening on May 2, will present 48 Russian and Byzantine icons and artifacts on loan from the British Museum.

Following the exhibition in Clinton, MA the show will travel to the Chrysler Museum in Norfolk, VA in September.

Eighty-one years ago on May 4 Russian actress Tatyana Samoilova was born in Leningrad. Samoilovacame to global prominence in 1958 after the role of Veronika in the WWII drama The Cranes Are Flying, which won the Palme d'Or at the 1958 Cannes Film Festival.

Tatiana Samoilova in the film The Cranes Are Flying. Source: Kinopoisk

Samoilova, who died last year on the same day she was born, was also well-known for her role as Anna Karenina in the film directed by Alexander Zarkhi.

If you are organizing a Russia-themed event in the U.S. and would like it featured in this column, forward the press release to us@rbth.com and we will consider it for publication.