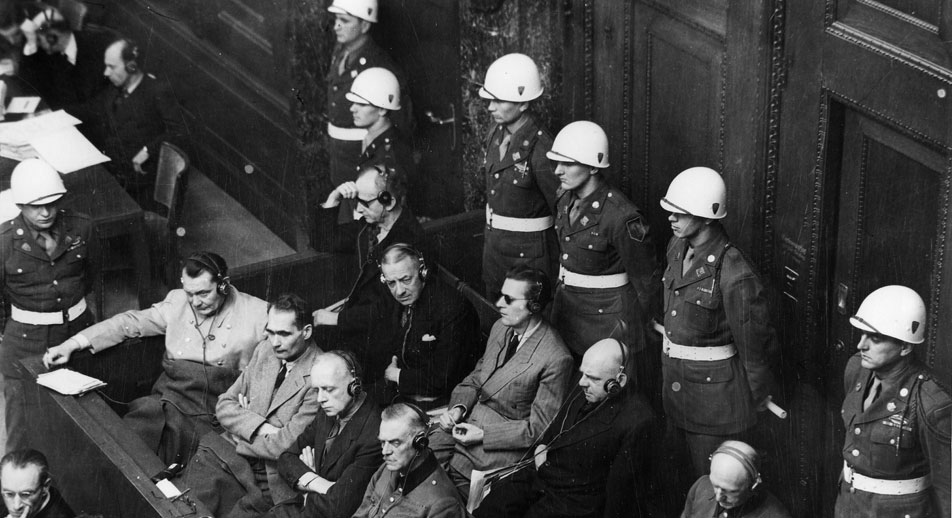 Defendants in the dock at the Nuremberg trials. Source: Photographer Yevgeny Khaldei via Ullstein Bild /Vostock-Photo

Photographer Yevgeny Khaldei captured the iconic image of Soviet soldiers flying the red flag over the Reichstag and documented the post-war Nuremberg trial of top Nazis. Surprisingly, 70 years after the end of the war, outside of Russia his name is barely recognized. As part of RBTH's "The Unknown War" project, British filmmaker and journalist Nick Holdsworth, who knew him personally, tells the story of a talented and modest man, revealing new details of his turbulent biography.

You would have never known Yevgeny Khaldei was one of World War Two's greatest frontline photographers. Modest and unflappable, the short, stocky man pensioner lived in genteel poverty in a small one-bedroom apartment in Moscow's north western suburbs.

And yet this was a man whose iconic images of the Red Army's punishing and bloody campaign to push the Nazis back across Eastern Europe as far as Berlin, were as famed worldwide as he himself as a personality was unknown.

His photograph of frontline troops raising a red flag over the Reichstag in May 1945 days before the final German capitulation became the defining, if controversial image of the defeat of Nazism. Criticised for staging the photo two days after Red Army soldiers had briefly raised the hammer and sickle as fighting still raged, Yevgeny's photo was recreated a couple of days later after he had flown back to Moscow with rolls of films and had his uncle, a tailor, run up a large new symbol of Soviet victory from an old red table cloth.

Yevgeny had always defended the image - believed to have been taken on direct orders from Soviet leader Joseph Stalin - insisting it merely recreated a true event. That he scratched out additional, looted, watches seen on the forearm of one of the soldiers he recruited for the picture and artificially darkened clouds of smoke in the background when developing the images, was perhaps understandable at a time when his job as TASS photographer with the rank of Red Army lieutenant was to both record the truth and do his bit to maintain Soviet morale. 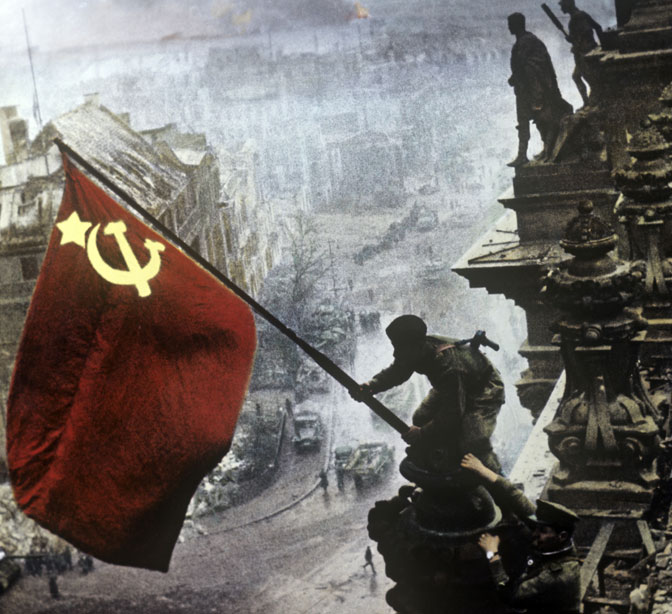 The image of the Soviet soldier raising a flag over the Reichstag after-touch. Source: RIA Novosti 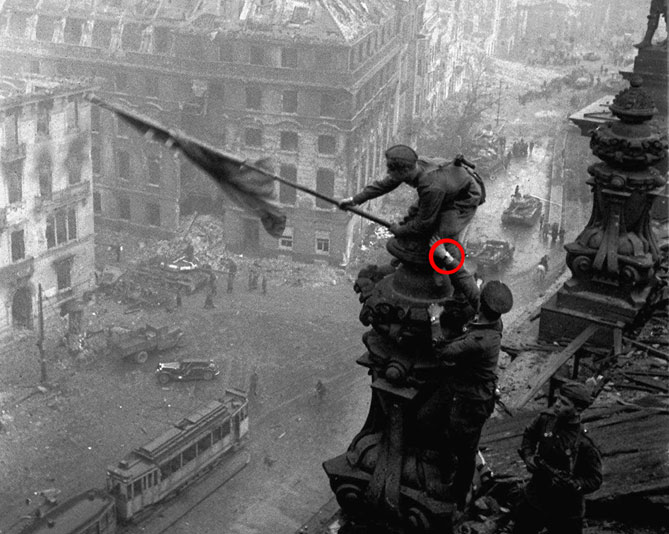 Other images, such as Red Army troops marching over swastika-bedecked flags in a street outside burning houses in Austria in 1945, may also have been staged, although judging by the behaviour of Ukrainian at Kiev's Maidan Square in February 2014 where I witnessed ordinary people wiping their boots on the blue flags of deposed President Viktor Yanukovych's Party of Regions, it is a natural human tendency.

The paired photos Yevgeny took in a park in Vienna of a Red Army officer looking on with undisguised repulsion at the bodies of an SS man, his dead wife, son and daughter - whom he had evidently shot before taking his own life on a park bench - is a disturbingly arresting image. As is the powerful portrait of a Jewish man and woman, their coats still displaying the yellow stars the Nazis obliged them to wear, pictured in Budapest in January 1945 gazing at Yevgeny's lens with utter bewilderment after he had told them in Yiddish they were free and could tear off the dreadful symbols.

But Yevgeny volunteered none of these stories immediately.

The Ukrainian-born photographer, whose mother had died a year after his birth in 1917 in an anti-Semitic pogrom in Yuzovska (now Donetsk) when a bullet passed through Yevgeny's body striking her as she clutched him protectively to her breast, was not given to boasting of his achievements.

But over a glass or so of green label Moskovskaya crystal vodka - a small dish of sliced apples to one side as zakuska to accompany the shots - his warm brown eyes, magnified behind large reading glasses, would light up as he related his favourite salty anecdotes and wartime stories.

Yevgeny Anan'evich was not given to wearing a chestful of ribonned war medals - though he had many including to his name, including the Order of the Patriotic War and the Order of the Red Star - but was happy to show visitors to his small Soviet apartment prints and original negatives from the thousands of rolls of film he shot during a career that began as a teenager recording scenes in Donetsk (by then known as Stalino in honour of the Soviet leader) on a homemade camera in the 1930s.

But first those who found their way to his suburban flat would need to drink with him and listen to a few jokes.

"A Jew goes to a prostitute and asks her how much she charges," he told me on my first visit to him in 1996, just a year before his death at the age of 80. "'Here's the deal', she says. 'I charge one rouble on the way in, and one rouble on the way out. You enjoy yourself. I'll keep count.'"

There followed a version of a joke one sensed he had first told on the frontlines in the 1940s, ending with a punch line about the "little Jew" raising his finger and saying "But I've only got one rouble."

It was typical Yevgeny: cheeky and endearing. A fluent German speaker, he was also an old-fashioned ladies' man. I once saw how a beautiful, statuesque but tough, German TV film editor melted when he asked to stroke her exposed navel, a gold tummy button piercing evident on her well-toned torso.

Yevgeny's images, which included haunting portraits of top Nazis in the dock at the post-war Nuremberg Trials, have been hailed as among the greatest photography of World War Two. His post-war work for TASS and later Pravda never achieved the same heights, although his portraits of Stalin, Molotov, Kruschev and pioneer cosmonaut Yuri Gagarin, along with studies of the economic, military and social achievements of the times, retain the studied beauty of his earlier images.

Denied copyright to his own photographs, which were often published un-credited, Yevgeny never gained the fame of many of his contemporaries such as American photographers, Margaret Bourke-White and Robert Capa, who presented him with a Speed Graphic camera when they met during the Nuremberg Trials. 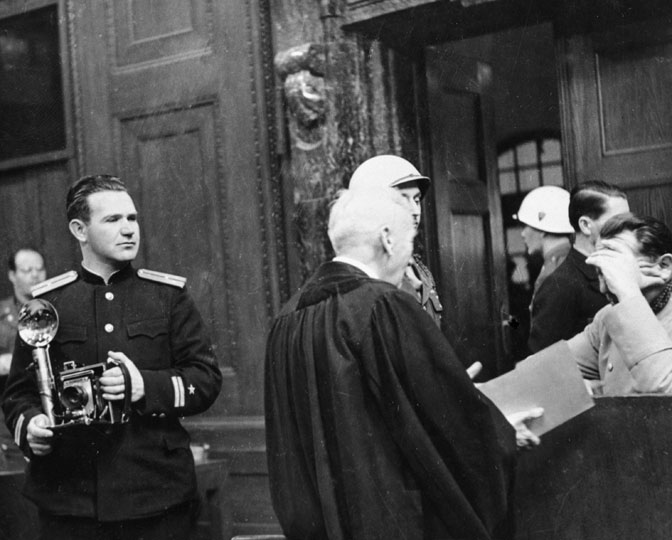 Interest in his work picked up towards the end of his life and in 1995 at the Perpignan International Festival of Photojournalism he was award the title of Knight of the Order of Arts and Letters, one of France's highest cultural awards. A French TV channel also ran a documentary film about his life and work.

He continued working until his death, processing rolls of film in his own darkroom at home using equipment dating back to the war years.

It was in that darkroom that I sat with him one day when he showed me the original roll of 35mm black and white stock he used to shoot the Reichstag picture - complete with the frames where Soviet censors, angered by visual evidence of looting, had used a pin to scratch off the several "additional" watches lining the Red Army soldier's forearm.

His inclination was to give visitors photos and it was only with some persuasion that he would take a proper fee for printing and signing his beautiful images. Today original copies of his works fetch thousands of dollars and in November 2014 the 1937 Leica III he used to capture the famous Reichstag shot was sold by Bonhams in Hong Kong for over $220,000.

Robert Yellowless, who owns the Lumiere Gallery in Atlanta, which feature work by Yevgeny alongside other world famous photographers, said he was, "an exceptional talent, whose stories on film capture the human essence of the war.

"His work attracts visitors to our gallery from the U.S., Europe and Russia, who share a common interest in the period and appreciate a great photographer's accomplishments." 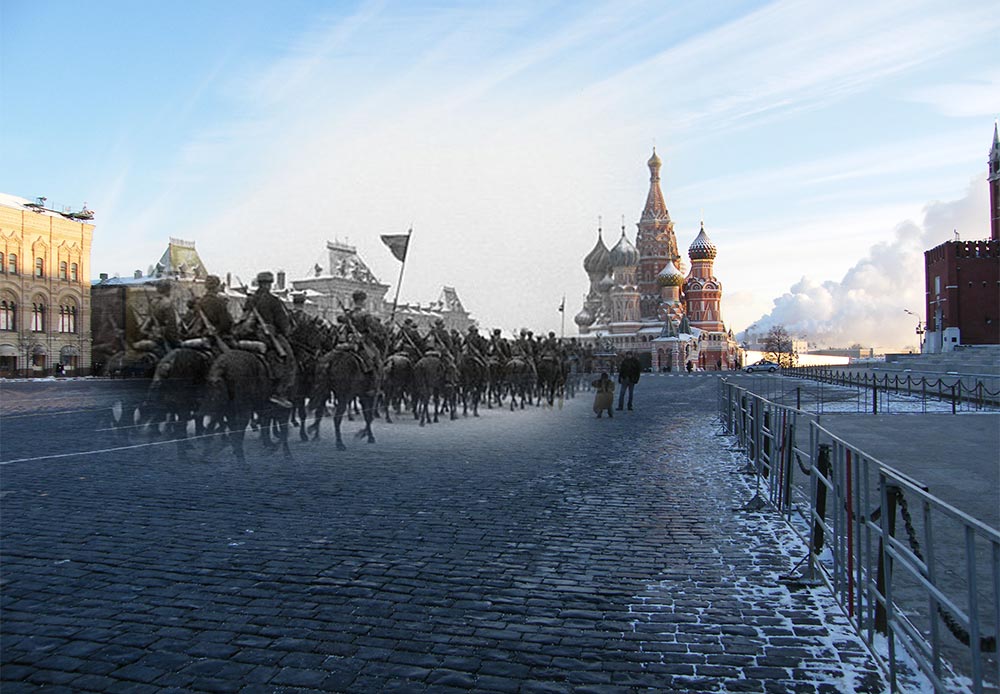 From Berlin to Moscow: walking the streets that remember World War II