Vignettes from the Great Patriotic War 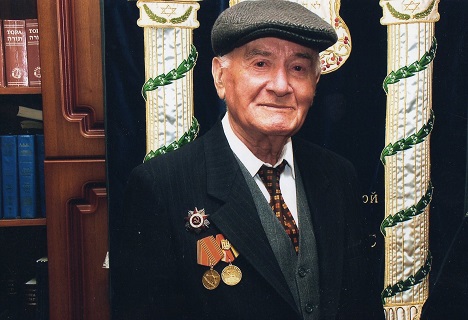 As the 70th anniversary of the end of World War II approaches, two staffers with RIR recount the experiences of two of their relatives, ordinary people who fought for the Soviet troops and suffered enormous hardship in the Great Patriotic War against Nazism.

By 1941, Orca Shabshlis Peretsmanas (1913-2008), my wife’s grandfather, had already served a term in the Lithuanian army. Lithuania was annexed by the Soviet Union in 1940.

In June 1941, when Nazi Germany’s troops invaded the Soviet Union, Orca Shabshlis was working as a tailor-cutter in Latvia, on the border with Lithuania. Immediately after the German invasion dramatic events unfolded in Lithuania; power went from the Soviets to the interim government, and the local Jewish population was massacred.

Having learnt about the outbreak of war, Orca had decided not to return to his native village Krikolyay, and fled to the Soviet Union. Later he learnt that his parents and siblings had been killed.

In the USSR, Orca Shabshlis found himself without money, food or shelter.

Learning that the Soviet Red Army was forming the 16th Lithuanian Division made up of refugees from Lithuania in the city of Gorky (now Nizhny Novgorod), he rushed there. When he reached the city on the Volga, he was denied permission to join the Division because he was so exhausted and not found suitably fit physically.

Then Orca decided to move to the South. In Uzbekistan, he found work as a tailor and, once he recovered his health, he returned to the formation point of the 16th Lithuanian Division.

At the frontline he was appointed to become a tank sniper. Orca Shabshlis went through the whole war as a Red Army Corporal, and fought on the Orel-Kursk, where he received a shrapnel wound. Later he was recommended for a decoration for military achievements in this tank battle.

After the war, Orca Shabshlis, along with his cousin Iakov Idelson, came to the village Shaturtorf in the Moscow region, where he began working as a cutter. Together with his wife, he raised and provided education to two sons.

My grandfather Begali Kahramanov was born in a large family in the mountain village Arab-Shahverdi in Gobustan region of Azerbaijan. He was a shepherd who completed 4 classes of school and could barely speak and write in Russian.

He enrolled and reportedly served in the infantry of the 2nd Shock Army of the Volkhov Front. The conditions were severe, ammunition and food were lacking.

On June 25, 1942, a year after the outbreak of the war, the Germans closed the corridor linking the 2nd Shock Army with the main forces of the Red Army. At about this time my grandfather was taken prisoner, after which he was sent to a transitory concentration camp in the Baltics, and then to Germany.

The exact name of the concentration camp remains unknown. It was probably one of the five camps liberated by the Americans in Germany: Buchenwald, Dora-Mittelbau, Flossenbürg, Dachau or Mauthausen.

After his liberation in 1945, my grandfather was transferred to the USSR check-filtration camp on Italian territory. Next there was a series of cities, where the prisoners were transported by sea and rail, and then finally, they were forced to walk 54 kilometres all the way to Kyrgyzstan. There, by a court order, he had to work for 6 years on the first Soviet uranium mines in the town of Maili-Sai.

The town was built by the “Special Contingent” or the Soviet citizens repressed for various reasons, including the former Soviet soldiers who had been taken prisoner by the Germans.

The Soviet citizens of German nationality who had been evicted from the Volga region and the German settlements in Ukraine were also working there. All of them were called the special settlers. They lived with their families in mud huts and barracks.

In Maili-Sai my grandfather met his future wife, Raisa, who became my grandmother. For the rest of his life Begali worked at an oil field in the town of Kochkor-Ata (Kyrgyzstan), where five daughters were born to him and his wife. In May 1990, Begali died after a long illness.