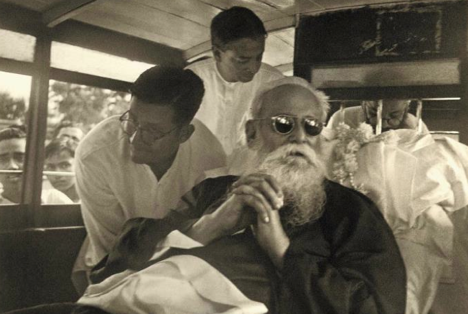 Rabindranath Tagore died soon after the June 1941 Nazi invasion of the Soviet Union and did not live to witness the Great Victory. But an early pointer to the secret behind the Great Victory lies in his observations and immense admiration for the people in the pages of his ‘Letters from Russia’.

On 9th May this year the Russian Federation and Republics of Armenia, Azerbaijan, Belarus, Kazakhstan, Kyrgyz, Tajikistan, Turkmenistan and Uzbekistan are commemorating the 70th anniversary of the victory of the Soviet Union over Nazi Germany. This victory brought to an end the most terrible four years of bloodshed in the recorded history of Russia.

What were the factors that determined this epochal victory? It could not have been weapons and technology alone because in the early stages of the war, the Soviet Union, like Britain and France, did not have the means of combating the advanced weaponry and huge armed resources of Germany.

After 1935 Germany began actively building its military muscle.  By contrast, for two decades after the Russian Revolution, the young Soviet Union with its many Asian republics was engaged in constructing industries, stabilizing agriculture and building the infrastructure of a modern state.

It was this Russia that India’s poet-philosopher ‘Gurudev’ Rabindranath Tagore, one the greatest poets of the last millennium, saw when he visited Russia at the invitation of the Soviet government in 1931. The aristocratic Brahmin zamindar, the votary of the Hindu Upanishad, saw the new society with rapture.

He describes how the residue of privileges had been swept away.

“The French Revolution came as result of ancient wrongs. The echoes of their creed rang out but, as nationalism gained ground, the concern for the oppressed became less. The curtain has now been raised on reshaping the world. Rehearsals are taking place as a prelude to the real drama of history...They can dream of a world where there is no hunger, disease, insults and oppression… In their folly and arrogance the powerful have ignored the real adversaries - the sorrow and the suffering of the people that finally leads to revolt.”

Tagore wrote: “The immense effort made by the Russians for the welfare of the ordinary people cannot be imagined by Indians who have lived under British rule. Until seeing conditions in Russia I could not believe it possible to have such progress in just a decade… The education system has transformed the mind of people… Education is not regarded as a matter of passing examinations but for the full development of the human personality….The Russian authorities are concentrating on three sectors; education, improvement of the peasantry and technical-scientific development…They are trying to obliterate the injustices of a millennium in a decade.”

After his visit to Russia in 1931, Tagore wrote with intuitive insight in ‘Letters from Russia.’

Intuitively, he wrote memorable lines foreseeing the Nazi invasion of Russia in 1941.

“They (Russians) are tightening their belts and striving to build a new order. But they have to do this swiftly because they have many adversaries.”

When Germany invaded Russia on 21st June 1941, the poet grieved for the millions who would die on both sides in a famous poem.

“The world has inscribed a tilak (mark) of blood and tears on its forehead.”

Russia withstood the 900 days siege of Leningrad when millions died of starvation. Defeat of the formidable German army in the epic battle of Stalingrad, said to be one the bloodiest battles in human history, turned the tide of the Second World War. The retreat of Nazi Germany began. Three years later the combined forces of Soviet Union and United States took Berlin.

Tagore died soon after the Nazi invasion of the Soviet Union (in August 1941) and did not live to witness the Great Victory. But an early pointer to the secret behind the great victory lies in his immense admiration for the people in the pages of his ‘Letters from Russia.’

“The people of the Soviet Union,” he wrote, “have accepted suffering and sacrificed their lives for a new society.” He described how students and professors, shivering from cold and hunger catalogued the country’s heritage “from the forsaken palaces of the rich.” The determined courage and sacrifice prevailed over advanced weaponry of the adversary and their own ordeals. “No sacrifice was great enough to preserve the unity and security of their land.”

Tagore, the Indian Nobel Prize – winning poet, would have enjoyed the lines of the Russian Nobel Prize-winning novelist, Mikhail Sholokhov:

“Oh my land, more loved than the beloved!”